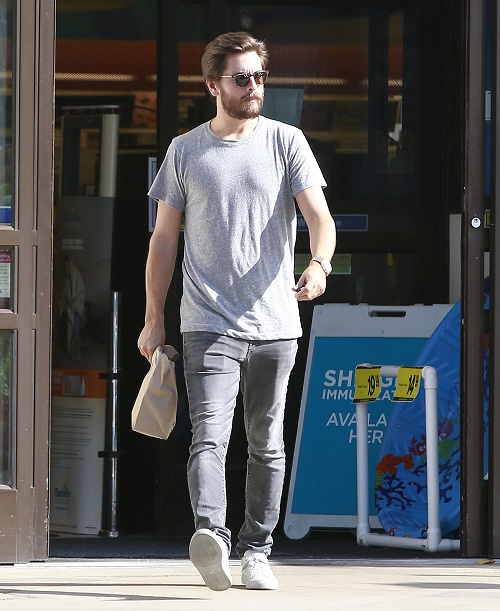 Scott Disick is cheating on Kourtney Kardashian again – or still. The prolific party animal has struggled with alcohol abuse for years, and just can’t seem to stop partying long enough to be a father to his three children with Kourtney. But according to a new report, he could have another baby on the way as a result of a drunken binge that ended with him having unprotected sex with a stranger. Apparently, the last time Scott Disk was in Arizona, he cheated on Kourtney while he was wasted after a night of wild partying – and he was afraid his mistress was pregnant!

The June 22 edition of Star Magazine reveals that while Scott Disick was partying in Arizona in January, he took a gaggle of girls back to his hotel room for an after party. The insider dished, “There were about 15 girls there and the only guys were his security. Everyone was drinking champagne, and Scott and some of the girls were using cocaine too. Eventually most of the girls left, but a gorgeous brunette college student stayed behind. The next day Scott texted her and asked her if she was on the Pill. He was totally freaking out.”

It turns out Scott Disick’s wild night in Arizona didn’t produce a baby, just a pregnancy scare. But Scott wasn’t exactly scared straight by the incident. Star’s insider says that a few weeks later he returned to Arizona and had another hook-up with the same girl! Kourtney Kardashian is apparently unaware of Scott’s pregnancy scare with another woman, or she chooses to be completely naïve about the situation.

Frankly, we are amazed that by now Scott doesn’t have a string of Baby Disick’s from the West Coast to the East Coast. We really have no pity for Kourtney anymore, if she wants to believe that Scott doesn’t cheat on her when he is surrounded by available women and too drunk to know his own name – then that is on her.