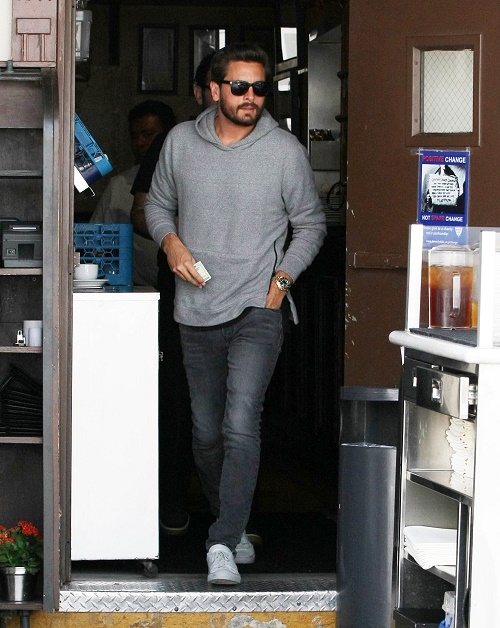 Scott Disick is a mess, and after multiple failed trips to rehab, the Keeping Up With The Kardashians star is still drinking himself into a stupor every day. According to his former manager, he is addicted to cocaine as well. Meanwhile, Scott’s longtime girlfriend, Kourtney Kardashian, is stuck at home raising his three kids by herself while her drunk baby-father parties from the West Coast to the East Coast on a weekly basis. Kim Kardashian and Kanye West are disgusted with Scott – and according to a new report, they sat Disick down and laid down the law.

The June 29 edition of In Touch Magazine reveals that Kim Kardashian and her husband Kanye are sick and tired of Scott putting Kourtney Kardashian through hell. An insider dished to In Touch, “They told Scott that he has to get help. The fact that he was too wasted to do a meet and greet for charity in Montreal on June 6 was the last straw. They were already having a hard time overlooking his wild behavior while Kourtney was home alone and upset, looking after their three kids.”

It’s almost funny that Kim Kardashian and Kanye West think that they can make Scott Disick turn his life around. Even if Kanye West really was Jesus, even he probably couldn’t save Scott at this point. Scott has been partying for nearly a decade, his addictions are serious – and he really has no reason to get sober. We all know Kourtney is never going to actually leave him, or else she would have by now. So, if he is allowed to behave this way, why would he stop? But, hey, what do we know? Maybe Kim and Kanye’s half-hearted intervention will inspire Scott to go back to rehab for the 738th time.

Do you think Scott Disick will ever get sober? Will Scott Disick & rehab ever mix successfully? Or are Kim Kardashian and Kanye West just wasting their time? Let us know what you think in the comments below!