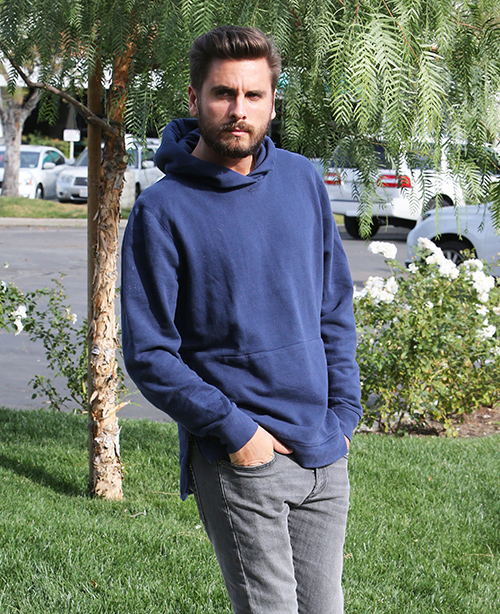 Has Scott Disick relapsed? Did buzz that Kourtney Kardashian slept with Justin Bieber send Disick back to the bottle? Is Scott crushed by baby mama Kourt’s hooking up with the Biebs?

Fresh out of Cliffside Malibu rehab center, sources report that Disick was out-of-control and acting like a “wild man” on a recent night out on the town. Kourt’s friends divulged that Kardashian thought Disick had taken rehab seriously this time and things would be different. But it looks as if nothing has changed. Scott’s love of partying has returned.

What’s going on with Disick? Reportedly part of the problem is that Scott is hanging out with Kylie Jenner’s boyfriend Tyga – and the rapper is a bad influence on Disick. In Touch was told by an insider that Scott has been hiding his drinking from Kourtney. An insider was partying with Scott on December 6 revealed that the father of Kourtney Kardashian’s three children was completely out of control. “[Scott] was a total mess. At one point [Disick] even pushed his crotch into a girl’s face.”

Kourtney’s hooking-up with the Biebs couldn’t have helped Lord Disick’s disposition. Kourt was out for a night on the town with a few gal pals on December 11. An observer revealed that Bieber was immediately on the “Keep Up with the Kardashians” star’s radar. Friends noticed that Kourtney headed right for Justin Bieber and started snuggling and kissing the singer. Not everyone was able to see what was going on, but those who could see the 36-year-old mom-of-three and the 21-year-old bachelor said there was a ton of chemistry between them.

Wouldn’t you agree that the Biebs being Kourt’s new boy-toy is kinda-sorta gross? Not because of the age difference, but because Justin has reportedly had flings with younger sisters Kylie Jenner and Kendall Jenner. But, there was gossip that Scott Disick slept with Kendall. What’s good for the goose is good for the gander? That’s just way too much ick factor, right?

Justin and Kourtney kept the party going at the Blind Dragon club. A witness observed that before the Kardashian and Bieber ducked out of the club around 2 a.m. the duo looked very, very close. About 4 a.m. Kourtney – flying solo – was spotted leaving the Montage Beverly Hills hotel, a favorite place for Justin to crash.

An Instagram posted by Bieber a few hours later seemed to take a jab at Scott. The Biebs was pushing a mystery woman up against a car and it seemed as if the couple was kissing – or more. The caption on the photo? “Lord knows” – a reference to the “Lord Disick” persona enjoys adopting? The woman in the photo was not Kourtney – it was model Jasmine Villanueva – it was later discovered.

Scott Disick may have already been spiraling out of control – again – before Kourtney Kardashian played kissy face with Justin Bieber. But has Disick hit rock-bottom yet? After Kourtney and Scott are done messing around with much-younger partners can Disick finally get sober? Will Kardashian take Disick back if he does finally clean up his act? Or is too late for Lord Disick and the “Keeping Up with the Kardashians” star?

Let us know what you think in the comments section below and come back to CDL for the latest Kardashians news and gossip.