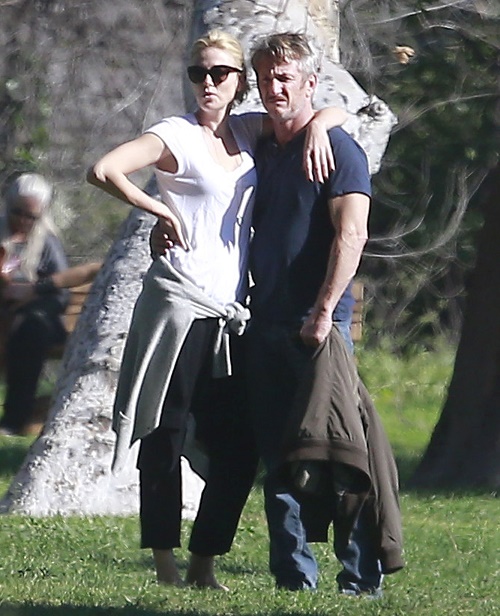 Sean Penn and Charlize Theron have been getting very serious lately, and that includes taking trips abroad and talking about marriage. However, a new report from the National Enquirer suggests that Sean might be cheating on Charlize – and with her stunt double, no less.

You know, I always wonder why affairs with stunt doubles don’t happen more often. These doubles are always around, physically resemble the actors and actresses, and are usually just as attractive.

Anyway, Sean Penn and Charlize Theron have teamed up to make the movie ‘The Last Face’, but during filming, Sean reportedly spent a lot of time with Charlize’s stunt double, Fleur van Eeden. 30-year-old Fleur told the Enquirer, “I find Sean very sexy still, even though he’s older.” That’s all well and good, but what makes Sean’s actions suspicious is that he reportedly asked Fleur to come watch him recite poetry at a remote campsite during filming – while Charlize wasn’t there.

Fleur added, “Charlize didn’t come. I was alone with Sean and a few crew [members]. It was awesome. They put up a tented camp for the crew, and offered Sean the guesthouse. But he refused and insisted on sleeping with us. One night we all stood ’round a bonfire, and suddenly Sean said, ‘I want to read you my poems, my private collection. Would you mind?’ It was phenomenal – awesome – under the big starry sky. He’s a great poet, a very deep, romantic guy.”

I’m not sure if this Fleur van Eeden is purposefully trying to make it sound as though Sean is cheating on Charlize and having an affair with her, because that’s what it seems like. However, she also seems somewhat naive about the industry, further exemplified by her choosing the National Enquirer to give this interview to. At the end of the day, Sean Penn having a romantic getaway with Charlize Theron’s stunt double definitely raises eyebrows, but I don’t think it’s a confirmation of his cheating. Do you? What do you think about Sean Penn & Charlize Theron dating in the first place?