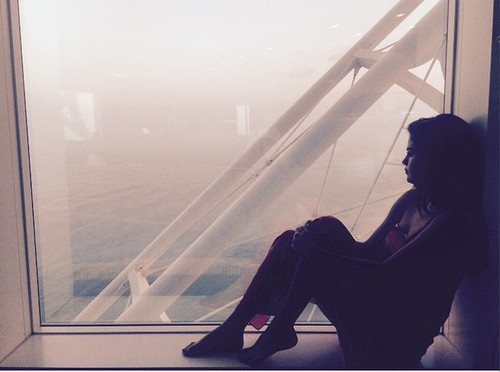 Selena Gomez has been tricked by Kendall Jenner and Gigi Hadid as Justin Bieber hooks up with Haily Baldwin on a Romantic vacation in Turks and Caicos. Kendall Jenner never recovered from the public mocking she recieved when Selena Gomez stopped following her on Twitter and commented about getting the negative influences out of her life. Indeed the two have had a contentious relationship for quite some time.

CDL told you that Selena Gomez made the decision to travel to Dubai with Kendall Jenner and GiGi Hadid in an effort to look as though she is over ex Justin Bieber… in hopes he’d see her having a great time and want her back. We reminded you about the “frenemy” relationship she and Kendall share, and it seems we were right on when labeling these two as more enemies than friends.

Kendall has long been jealous of Selena’s fame and popularity. Selena was famous for her talent as an actress and singer. Kendall has no talent and had to figure out a career after being jolted into the spotlight after her family became famous from her sister Kim Kardashian’s sex tape. Kendall Jenner ended up going into modeling, but knows that many still whisper that she only got where she is because of her famous family and connections. After Selena made her look bad, Kendall simply plays nice with Selena but wouldn’t bat an eye if Selena was scorned by any man. Kendall loves her position now because she feels she finally has the upper hand with Selena because she’s close friends with Justin Bieber. Kendall makes comments here and there about having spent time with Justin, or knowing what he’s up to because she knows it drives Selena crazy. Selena hides her jealousy and plays along to get more info about what her ex has been up to.

Now, Hollywood Life is reporting that Kendall and GiGi do actually have ulterior motives and are keeping Selena busy so their friend, fellow model Hailey Baldwin, can enjoy some alone time on vacation in Turks and Caicos with Justin! Kendall and Gigi have earned gullible Selena’s trust after a few compliments and pretending to love spending time with her. Selena is very, very naïve and trusts anyone who befriends her because she is so lonely for friends. She lost many friends because of Justin, and ended up spending all her time with him… or wanting to spend all her time with him because she doesn’t have many close girlfriends. Apparently, now she believes she does, but Selena Gomez is getting played once again as Kendall Jenner and GiGi Hadid are laughing behind her back, waiting for confirmation that Justin Bieber and Hailey Baldwin are official.