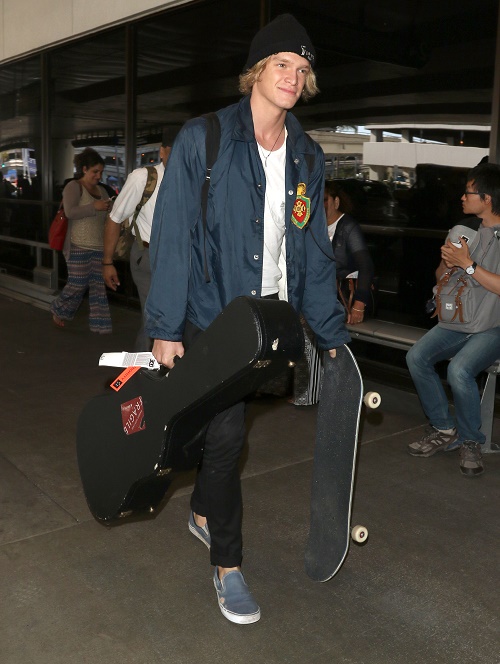 Are Selena Gomez and Cody Simpson dating? It’s nearly impossible to keep up with Selena Gomez’s dating rumors, but after she spent an afternoon with Cody last week and uploaded a photo of them eating ice cream together, everyone was certain that they were a couple. And Cody Simpson’s own mother even retweeted the photo of Cody and Selena, making it clear that she approved of them dating.

After his hangout session with Selena Gomez, Cody Simpson made an appearance on the Australian Today Show – and of course he was asked about his relationship with Selena Gomez. Cody didn’t exactly deny that they were dating, but he didn’t exactly confirm it either, instead the pop star implied that he and Selena were “just friends.” Cody explained, “It’s all sweet, like I try to be friends with everyone.” What does that even mean?

Selena and Cody are in a sticky situation though – and we can’t exactly blame them for not wanting to profess their love for each other. Cody is close friends with Selena’s ex Justin Bieber, and Selena is close friends with Cody’s ex Gigi Hadid. If they were to come out as an official couple – all hell would break loose in the close knit circle of friends. Is that what Selena wants though?

Justin Bieber recently professed his love for Selena Gomez in the “Where Are You Now” music video with Skrillex, and Selena would love nothing more than to rub her ex’s face in the fact that she is hooking up with his BFF Cody – but Cody apparently has a conscience and is determined to keep their relationship a secret to spare Bieber’s feelings. A source close to Selena dished to CDL, “Selena and Cody are definitely hooking up. Selena is getting frustrated though because Cody basically looks up to Justin and is a little intimidated by him. She wants to go public, but Cody is scared.”

Do you think that Selena Gomez and Cody Simpson’s secret relationship will last, or will it be over as soon as it started? Do you blame Cody Simpson for not wanting to go public? How do you think Justin would react if they did? Let us know what you think in the comments below!