Selena Gomez Dating Ed Sheeran: Justin Bieber Wants SelGo Back, Cries For Her In New Music Video ‘Where Are You Now’ (WATCH) 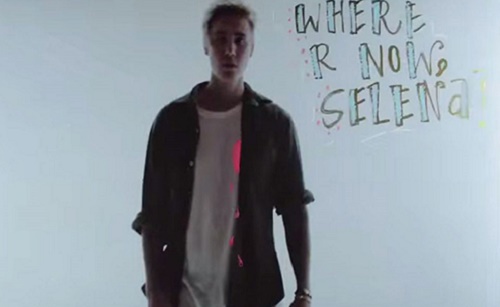 Selena Gomez has no intention of dating Justin Bieber again – but Biebs is determined to win her back! Last week, Selena dropped her new music video “Good For You,” and she proved that she doesn’t need Biebs by her side to make hits and send the internet buzzing. The video was rumored to be about Justin Bieber, but it basically turned out to just be Selena rubbing Justin’s face in how hot she is, and what he is missing out on.

Justin Bieber answered back with his new music video this week, “Where Are You Now,” and there is no denying that the song with Skrillex is all about his ex-girlfriend Selena Gomez. And, shocker…Justin wants her back! You know how normally the media has to look for teeny tiny clues in songs and videos to try and prove they are about another celeb? Well, we didn’t have to look very hard! In Justin’s new music video, there are photos covered in graffiti and one of the photos has “Where R U Now, Selena” spelled out in huge and crystal clear letters. Subtlety was never really Justin’s strong suit.

So will Justin’s super romantic and semi sad song about his lost love Selena Gomez be enough to win her back? Probably not. It looks like Selena has totally moved on – for real this time. The “Good For You” singer is apparently dating fellow singer Ed Sheeran. Ed and Selena were caught out to dinner together and appearing pretty cozy, and then afterwards they headed to Tori Kelly’s album release party. And, they nearly ran into Justin Bieber! A partygoer told Page Six that Selena arrived on Ed’s arm, and then when Justin showed up, she didn’t even acknowledge him and quickly left with Ed not much after Justin’s arrival. Awkward!

Do you guys think that Justin and Selena will ever get back together? Or do you think that she and Ed Sheeran make a super cute couple? Let us know what you think in the comments below!