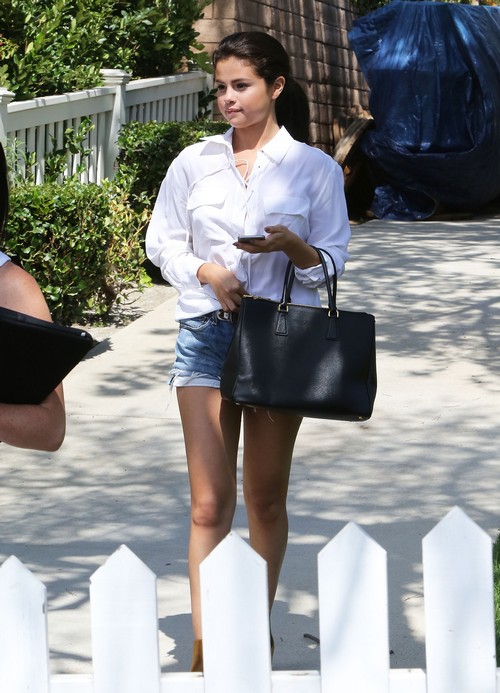 Was Selena Gomez cheating with Orlando Bloom after she and Justin Bieber were spotted canoodling at a hotel pool over the weekend in Los Angeles? As soon as Selena and Justin were seen together diehard Jelena fans jumped to the conclusion that the couple was back dating (again). It’s no secret that Justin Bieber has been pining away for his ex-girlfriend for months, and at quick glance it would appear that the couple has reconciled. But, Justin Bieber wasn’t the only one of Selena’s exes to hang out with her this past weekend!

According to a report from E! Online, after Selena was done “cozying up” with Justin Bieber at the pool, she and a few other girls went to party at Orlando Bloom’s house. What!? For those of you who don’t remember, in between Selena’s break-ups with Justin Bieber over the years she was reportedly hooking up with actor Orlando Bloom. There was even a messy confrontation between Justin and Orlando after Justin tried to get even by boasting about hooking up with Orlando’s baby mama Miranda Kerr. We’re going to go out on a limb here and assume that Biebs is not happy about Selena hanging out with him and Orlando Bloom in the same day.

Justin Bieber cheated on Selena Gomez more times than we can count on both hands, and it looks like Selena has finally turned the tables on Biebs. Selena Gomez’s revenge plot seems to be working like a charm too. Since Justin professed his love for SelGo in his latest music video, she has already been out on half a dozen dates with a different dude each night. Selena has bene spotted with Cody Simpson, Ed Sheeran, Nick Jonas, Niall Horan, and now is apparently heading to Orlando Bloom’s house in the wee hours of the morning.

Do you think Selena Gomez’s revenge is warranted, or should she give Justin Bieber another chance? Is she just sinking to Justin’s level and being petty? Will she and Biebs ever really get back together? Let us know what you think in the comments below!