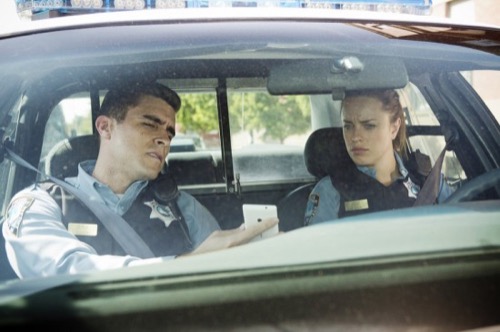 Tonight on USA Network their reality show Sirens airs with an all new Tuesday January 27, season 2 premiere called “Superdick,” and we have your weekly recap below. On tonight’s episode, in the Season 2 premiere, Johnny finds a perfect apartment to share with Theresa thanks to a landlord with a nut allergy. In other events, Brian struggles with his platonic love affair with Voodoo; Billy begins dating Theresa’s sister; and Hank wonders if he’ll ever find love.

On tonight’s episode as per the USA Network synopsis, “when the guys save a landlord with a nut allergy, Johnny (Michael Mosley) finds the perfect apartment to share with Theresa (Jessica McNamee), and his relationship with her enters a new “territory.” Meanwhile, Brian (Kevin Bigley) tries to understand the terms of his platonic love affair with Voodoo (Kelly O’Sullivan), Billy (Josh Segarra) starts dating Theresa’s sister, and Hank (Kevin Daniels) has to wonder if he’s looking for love in the right places.”

Tonight’s episode is going to be filled with drama and you won’t want to miss it, so be sure to tune in for our live coverage of the show tonight at 10 PM EST! While you wait for our recap hit the comments and let us know how excited you are for “Sirens” season 2!

It seems everyone is talking about sex on the premiere of Season Two of “Sirens”. And apparently there’s more than a few of them that’s upset they talk about sex more than they’re actually having sex. Take Johnny and Theresa for instance. They’ve both taken stock of their relationship and they realized things have slowed down for them in that department.

They’re currently at the stage where they find themselves to be boring. They like watching TV together in their sweats and frankly neither of them had a problem with this routine until they started talking to their friends.

It seems Billy and Maeve have sex all the time and according to him Maeve is super adventurous. She was even willing to have sex outside. So when Theresa heard this – she became oddly competitive. Normally she wouldn’t ask her partner about his and her sister’s sex life but once she heard hoe frequently they were doing it – it was like she was a kid again. And she wanted to beat her sister at something

And in Johnny’s case, he didn’t have a problem with his sex life until he explained to his friends that “technically” he and Theresa are still having the same amount of sex but now it’s spaced out. You see he has it all worked out. Before , back when they were constantly breaking up and getting back together, they were having the same amount of sex. The only difference is now they’re in more of a stable relationship.

So when they both returned home after such a day, Theresa and Johnny instantly had sex. And then she told him she wanted to have sex outside. Which, at first, he didn’t appear to have a problem with.

Yet, Johnny couldn’t follow through on the whole sex outdoors bid. And he finally admitted to her a long held secret of his that also explains his resistance. Johnny doesn’t like doing things outdoors because once when he was 15 he got a hand-job down at the beach from a girl that had sand all over her hand. And after he stopped screaming from the pain – he realized a group of seniors had been watching them the entire time.
So Johnny never got that picture out of his head and after Theresa started telling people that story – neither could anyone else.

They were calling him “Sandy Handy” back at the station. And luckily Johnny eventually figured out a new nickname for himself. Though he probably won’t be telling a lot of people how he got it.

Later, after people had been making fun of him, Johnny did go through with having sex in public but he got bit by a bee right on his penis. So Theresa took a picture of it while it was swollen and now they’re hoping “Super Dick” will catch on.