Sister Wives Catfish Scandal: Cody’s Wife Meri Caught Talking To Online Boyfriend, Turns Out To Be A Woman – Robyn Set Her Up? 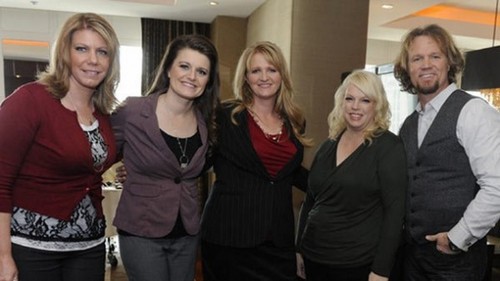 Is there a Sister Wives and Catfish crossover in the works? TLC’s reality TV shows seem to be nothing short of scandal these days – despite how wholesome the families are that are featured on them. Cody and his wives have had a tumultuous couple of years, what with their own feuding amongst each other.

There has always been a bit of a rivalry between Cody’s two wives Meri and Robyn – and it reached a whole new level in 2014 when Cody “divorced” Meri so that he could legally marry Robyn and adopt her three children from a previous relationship. Although, Cody and Meri were still together – the fact that she was legally divorced form him did not set well with her.

According to this week’s edition of In Touch Magazine, the scandal in Cody’s family runs much deeper than divorce papers or marriage licenses. Apparently after Meri was “divorced” and her daughter went away to college – she began feeling lonely and had an emotional affair with a man online named Sam.

Sam reportedly gave Meri the cliché Catfish rundown – said he was a business man, handsome as an underwear model (he probably sent her magazine clippings and claimed they were him), and that he was 6”6. The stress of her relationship with Cody crumbling, her rivalry with her “sister wife” Robyn, and her daughter leaving the nest took a toll on Meri – and she turned to her online boyfriend Sam for comfort.

When In Touch Magazine learned about Sam, they did some digging of their own – they even spoke to the mystery man who insisted that he was the real deal, however he refused to video chat with anyone from the tabloid or send them a copy of his driver’s license to prove he was real.

In Touch reported their findings, and revealed that “Sam” was actually a woman named Jacky Colton, and the “Oklahoma resident has a history of making up online identities.” However, Jackie kept the charade going and insists that “Sam” and Meri met up at a Las Vegas hotel multiple times, and “had sex over 60 times.”

Now, this is where it gets super weird. Apparently, Robyn and her BFF – a woman named Kendra discovered Meri’s online boyfriend “Sam.” They did their own Catfish investigation and came to the conclusion that it was a fake person, but they never bothered to share the information they found with Meri – they let her continue to “emotionally cheat” on Cody with a woman from Oklahoma.

Kendra insisted to In Touch Magazine that she and Robyn were not trying to sabotage Meri and Cody’s relationship, and now she is changing her story and insists that Sam is actually real.

Are you as confused as we are right now? In a nut shell: Meri was in an online relationship with a psychotic woman from Oklahoma and had an “emotional affair” behind Cody’s back. Meanwhile, Robyn encouraged it – knowing damn well that Meri was really talking to a woman and not a hunky business man named “Sam.”

Those Sister Wives are brutal to each other! Hopefully we will get to see this all unwind on their reality TV show, maybe Max and Nev can do a crossover! Let us know what you think in the comments below!