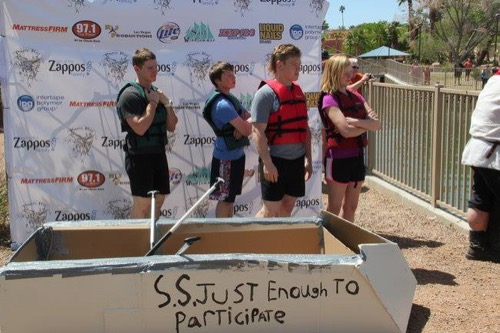 TLC’s reality show Sister Wives returns tonight with an all new Sunday October 11, season 6 episode 5 called “More Girls Than Kody Can Handle?,” and we have your weekly recap below. On tonight’s episode, Kody plans a bonding trip to the beach with his five youngest daughters after admitting he has better relationships with his sons.

On the last episode, a cardboard boat regatta at an annual pirate festival in Las Vegas finds Janelle’s family building one entry, while Christine’s and Robyn’s families worked on another. Did you watch the last episode? If you missed it we have a full and detailed recap right here for you.

On tonight’s episode as per TLC’s synopsis, “Kody plans a bonding trip to the beach with his five youngest daughters after admitting he has better relationships with his sons. Meanwhile, Madison’s plan to join the Mormon church hits a snag; and Meri makes a decision about attending therapy with Janelle to improve their strained relationship.”

Recently, Kody’s daughter Ysabel made a special request for her 12th birthday. She had asked her dad if she and the rest of the girls could spend some time with their dad without the boys anywhere around. And because Kody understood how much he needed to make more of an effort with his daughters, he happily agreed to Ysabel’s request.

More than one person has told Kody that he needs to be there for the girls just as much as he is for the boys. Yet the boys are easier for Kody. He knows he can relate with them over sports and usually one game of rough-housing is all it takes for them to bond.

Girls on the other hand are different. So as they’ve grown older, it’s simply gotten harder on Kody to connect with them. But Kody’s wives have all said something and even an anthropology student noticed his different behaviors around his children while she was studying the family dynamics.

So Kody sent out to make Ysabel’s birthday a possibly turning point in many of his father/daughter relationships. Not only did he plan something for the girls but this time he might have even gone above and beyond. Kody revealed that he rented out a house on the beach as part of Ysabel’s birthday celebration that had somehow become a weekend thing.

And at first everyone was excited. Time on the beach where all the girls could get to spend some good quality time with their dad and enjoy being away from their mothers and brothers. But as it turns out some of the girls later missed their moms. Particularly when it came towards shopping for food or when they had gotten too goofy. Which is a thing.

Though Kody is considered the sterner parent so there was times when he growled at the girls as a warning to them to “cut it out”.

Also Kody believes in pushing his children into trying out new things so he talked some of them into going on the bigger rides at the amusement park. And he had learned that Gwendlyn and Savanah are just two of his children could not be talked into doing anything they didn’t want. Neither of them liked the big rides and so they planted themselves at the sitting area and watched the bags as the rest of them stood on line.

So Kody found out a few things. It seems some of his daughters had inherited his stubbornness and away from her brothers – Savanah was a lot sassier on the trip than she was back home. But speaking of back home, Madison ran into a problem with joining the LDS church.

Apparently they don’t want her. Or better yet they are refusing to allow her to baptize into the church as long as she remains attached to her polygamous family. So unless she disavows them then it doesn’t look like Madison will be joining the mainstream LDS church anytime soon.

And that came as a blow to Madison. The young woman knew she didn’t personally believe in the polygamous principle however the LDS church is the closest thing she’s grown up with. So she thought transitioning into the church would be what best for her and since she’s gotten involved in the church. She didn’t just wake up one day and decided to join.

She did her research and meant/befriend several people from the church. So to reject her like that came as a shock she didn’t know how to recover from.

Yet what was important to Madison is that she didn’t hurt her family and she didn’t. If anything her mom was upset for her when she found out about the baptism. So the main priorities were still in check. And after Janelle expressed her shock about how things have changed within the church, she then did something that she never would have believed was possible.

She and Meri hugged.

But back to Kody’s trip, Kody and the girls had lot of fun though wives back home started to feel like he missed the point of the trip. Robyn said she heard about the one big party the kids were having and she was happy that they were happy. However she wanted Kody to get involved with the girls on an emotional level and that’s something that just did not happen.