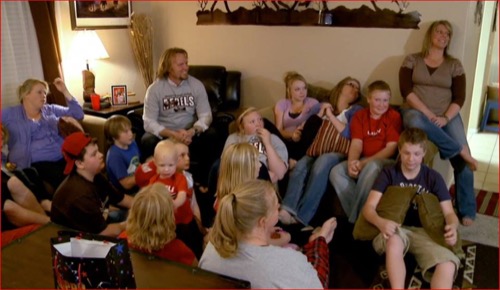 TLC’s reality show Sister Wives returns tonight with an all new Sunday October 4, season 6 episode 4 called “Just Trying to Stay Afloat,” and we have your weekly recap below. On tonight’s episode, a cardboard boat regatta at an annual pirate festival in Las Vegas finds Janelle’s family building one entry.

On the last episode, an anniversary trip to Texas turned into couples therapy for Christine and Kody. Meanwhile, the process of adopting Robyn’s children began as the family meets with their lawyer. Also A look at Christine’s journey included the major events in her life in the past five years. Did you watch the last episode? If you missed it we have a full and detailed recap right here for you.

On tonight’s episode as per TLC’s synopsis, “a cardboard boat regatta at an annual pirate festival in Las Vegas finds Janelle’s family building one entry, while Christine’s and Robyn’s families work on another.”

The Brown family are entering a cardboard boat competition. Apparently the boat competition was part of a Las Vegas pirate festival so the family thought it would be fun if they participated this year.

However, there’s a reason Kody’s wives tend to argue with him if they’re ever trying to do a project together. Kody is usually gets an idea about something and it doesn’t even matter if the idea is impossible to follow through on. He’ll still want do it and he’ll keep arguing for it long after his wives have already banded together to tell him “no”.

And that’s what happened with the cardboard boat. They were all given an instructional on how to build one and so all they had to do was repeat what they saw. Yet Kody suddenly wanted to put this or that on the boat. With both Christine and Robyn standing five feet from him, continuously telling him that they didn’t have enough time for all that.

The Browns came into the competition kind of late. So maybe next year, Kody could probably build the boat he’s dreaming about, but for that point in time, his wives were forced to step in. And tell him to take his attitude down a notch.

Kody can get a little testy if feels like someone keeps changing the plans on him. Though to be fair that was neither Christine nor Robyn’s intention. They had only wanted him to focus on the task on hand, like making the boat float, rather than going too elaborate.

And while those three were fighting over their boat, Janelle wasn’t that much luck with Gabe and Gwen. Gabe kept wanting to build their boat with the bare function yet his sister Gwen was turning out to be just as much as a control freak as her dead. So Janelle was stuck in the middle.

She couldn’t always side with Gabe because that wouldn’t be fair to Christine’s daughter but sometimes siding with Gwen for the heck of it was frustrating her son. So everyone was feeling the pressure. But in the middle of all that, Robyn heard from her ex. And he said he was willing to allow Kody to adopt the kids.

So good news all around. Robyn’s kids from her first marriage can officially become part of the Brown family and have the name. And the kids were the most excited about all of that. It seems the girls have wanted to be adopted for a very long time and their brother has managed to find all the practical value of being adopted. In other words, the kids were fine and they were looking forward to the change.

But the boat thing caused a lot of strife. Kody and Christine had a breakdown in communication and so they were yelling at each other. And surprisingly Robyn had to step in and tell them both to stop it.

However, Janelle was left feeling happy that she hadn’t joined the other adults. She later admitted that she didn’t want to get caught in an argument and that’s why she chose to make her own boat. So maybe next year Kody will make a boat of his own for the competition.

Because, really, they fought over everything. From structural design to even the paint. So all considering – individual boats is the way to go.

Though the competition ended up bringing back the fun. At first the kids didn’t think it was going to be such a great idea to a row a boat. But eventually the spirit of competing took over and Janelle’s boat rowed all the way into second place.

Now the other Brown family boat was nicer and looked just as sustainable in water but sadly their boast still lost out in the end. And it was because the kids in that one didn’t know how to row.

They tried and Kody who was with them also tried. Yet all they did was row in a couple of circles until finally the white flag went up.

Unfortunately all that trying tired them out though, luckily, they still got an award for creativity.