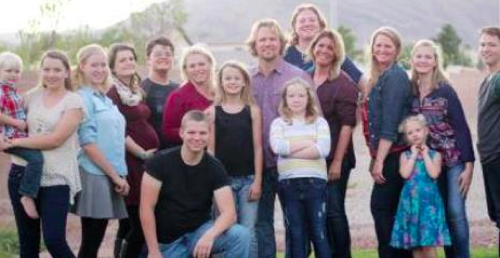 TLC’s reality show Sister Wives returns tonight with an all new Sunday November 1, season 6 episode 8 called “Chaos in the Cul-de-Sac,” and we have your weekly recap below. On tonight’s episode, the Browns throw a party to celebrate a judge’s recent decision that will allow Kody to adopt Robyn’s three oldest children.

On the last episode, a court ruling was expected and determined if Kody could adopt Robyn’s three oldest kids. Meanwhile, Janelle’s oldest daughter, Madison, made a surprise announcement. Did you watch the last episode? If you missed it we have a full and detailed recap right here for you.

On tonight’s episode as per TLC’s synopsis, “the Browns throw a party to celebrate a judge’s recent decision that will allow Kody to adopt Robyn’s three oldest children, and it turns into a big event for several dozen people.”

On tonight’s episode of “Sister Wives”, the family’s first concern was the kids. Robyn’s older three kids had been officially adopted last week and this week the family wanted to throw a party in celebrate the momentous event.

Dayton, Aurora, and Breanna haven’t seen their biological father in nearly two years. So he asked that they come up for a visit as way for them to know he still loves them and that the adoptions doesn’t have to mean he’s no longer their father. And Robyn agreed.

She knew how much the kids would enjoy seeing him and that their relationship with their father needed work. So she gave her consent for them to stay for a while in Montana with their dad. But, with them being away, she was also going a lot more time on her hands to take part in throwing them a party for when they came back.

Apparently the Browns take part planning quite seriously. They even went as far to hold family meetings amongst the adults as part of the planning. Kody and his wives had all sat down around the table and there they literally discussed everything. Food, possible entertainment, and also artwork which goes without saying was of course Christine’s idea.

Yet Kody thought that they could do chicken wings as part of a barbeque menu and so he was in for a fight. See, he had told Robyn earlier that he wanted a Sunday dinner kind of party so that’s what Robyn had in her head. And then, when Kody suddenly started to talk about barbeque, she was forced into stopping him in his tracks.

They had talked about a Sunday dinner and Robyn had agreed to. So there was just no way that she was going to let Kody change his mind at the last minute. And that left the other wives in amazement. Normally Robyn wasn’t as openly mouthy but her second pregnancy seemed to have changed her and her sister wives couldn’t be happier.

They liked the new Robyn. She got in on the making fun of Kody for being crazy and on top of that she was more assertive.

So the planning part wasn’t all that bad. They knew they wanted the party to have a dinner portion as well as a presentation of the gifts. Therefore the only hard part was actually getting the presents set up because unfortunately Christine’s idea, while really nice, was practically an uphill battle.

Christine had wanted to create an updated concreate memorabilia like the one the family had in Wyoming. See back in Wyoming, the kids had all put their handprints into some freshly laid concrete. And then they had written their names and ages by it so that they could always remember that point of time in their lives.

However not all the kids had been yet and Robyn hadn’t married into the family. So they were plenty of people that had been left out and hadn’t had their chance to be part of the project. And so that’s why Christine wanted to do it again, this time with everyone, so that their whole family could be shown together.

And like it was stated before, it was a nice idea but getting 24 people to put their handprints into wet concrete in 20 minutes or less was pure chaos.

Christine had spoken with the construction worker helping her out on the project and he managed to craft a tree in the cement for her. So all the family had to be worried about was getting all of their handprints in the leaves portion of the tree without face-planting or accidentally stepping onto the wet cement. And honestly that was quite a hassle.

Towards the end, Kody didn’t even think they could finish. He thought they would run out of time so he said as many handprints as they could fit would be fine. Though luckily everyone got their names and handprints in before the cement dried.

So that was a great way to start off the celebration and, when the actual party kicked off, it was just full of very sweet moments. For example Kody had had held a blessing over the kids so that he could truly feel part of the family church. And Robyn had given Kody a picture where she got an artist to put a younger image of him in a photo with her kids as baby. So that way it would be like he had been part of their lives from the very beginning.

And the family just seemed complete on tonight’s episode. So it’s hard to understand why Meri was still feeling so alone and cut-off?