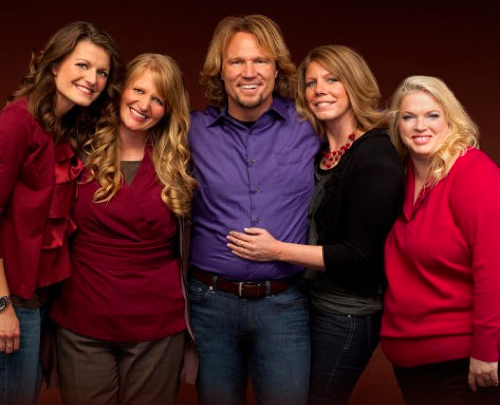 TLC’s reality show Sister Wives returns tonight with an all new Sunday September 13, season 6 premiere called “A Secret Marriage & Sister Wives Unseen,” and we have your weekly recap below. On tonight’s episode, in the season premiere, Kody and Meri’s divorce takes the family into uncharted territory. Also: Kody, his wives and their kids answer viewer questions.

On the last episode, Meri’s surprise announcement about divorcing Kody sends shocked waves through the family as the other wives heard the news. Did you watch the last episode? If you missed it we have a full and detailed recap right here for you.

On tonight’s episode as per TLC’s synopsis, “Many new questions arise following the official divorce of Kody and Meri and a look at the most dramatic, shocking and raw Tell All moments of the series. .”

The Browns have begun restructuring their family on tonight’s season premiere and it wasn’t as easy as they thought it would be.

Meri, who was the only one Kody was legally married to, has recently agreed to divorce Kody so that he could hopefully adopt Robyn’s kids from her first marriage. And though it was Meri’s idea, the actual process was still hard to live through. Especially as divorce was something no one wanted to experience. So Kody on his end wanted to make this whole thing as clinical as possible.

He kept checking in with Meri just so that she knew she was still very much part of the family. And he didn’t want to exclude her from anything. Including his second wedding ceremony with Robyn because that wouldn’t have been possible without Meri’s help.

However, Meri is someone that knows she has her dark moments so she feels she should step back from their second wedding.

Meri has moments where she flies off at the mouth and often the things she says come off as aggressive. Yet she is aware of this and that’s why she didn’t want to be part of Kody and Robyn’s second ceremony. And to be frank that was very wise of her.

She knew what she could and couldn’t take. Then chose to act on that knowledge. But Robyn was getting teary-eyed that Meri, in her eyes, didn’t want to be part of the next step. So she kept on trying to talk Meri into changing her mind until eventually Meri tried to make light of everything. Just so that Robyn could drop the issue.

Yet, after talking to Janelle, Meri realized she didn’t want to ignore what was bothering her. In fact she wanted to face it head on which funnily enough was once an issue with Janelle. Back in the early days of their relationship, Meri and Janelle were simply awful to each other and one of their biggest problems is that Janelle kept writing everything off.

So Meri came around to the idea of wanting to be at Robyn and Kody’s wedding. Only by time she did, Kody then had a change of mind about wanting Meri there.

Kody’s change of heart was rather abrupt but he had a good reason for it. He said it was his spiritual marriage to Robyn that mattered. So he didn’t want to make a big fuss over what he calls paperwork. But by disinviting Meri, he did make the other woman feel rejected.

She understood why Kody did what he did but it hurt getting disinvited. And the other sister wives would have liked to have felt included as well.

But truly the whole thing was clinical which was just what Kody wanted. He said this paperwork was only so that he could adopt Robyn’s children. Thus no one knew for sure the wedding date and the couple were able to go to an office and mostly say “yup, we know that part” to the officiant.

And then, when that was over with, it was onto stage three of the process. For that was going to be the real fight. The actual custody battle and from there going ahead with adoption. So stay tune to see how that pans out.

However, following tonight season’s premiere, Kody and the sister wives sat down to discuss both this upcoming season and reveal certain little tidbits that we hadn’t known about before.

For instance, did you know that Kody has been losing his hair since he was 22? Normally unless you’ve seen him in person you wouldn’t be able to tell because he tends to keep it long. But it’s true. And he’s not the only one mourning it. The hair was a big pull with some of the wives.

Although that’s not the only thing they have to contend with. The family is full of strong personalities and there have been issues in the pass with wives or potential wives in some cases. Yet it’s mostly worked out for the best.

Sometimes women from off the street will try to throw themselves at Kody. Which they believe is funny but what is actually insulting to the sister wives. So usually these women get set in their place.

And besides that, there’s the issue of Sister Wives Closet. The business began as Robyn’s brainchild and slowly it turned into a family business that basically consumed all of them. But while we’ve seen Janelle take a step back, it seems the company is a big portion of their yearly income.

So, yes, that has created problems of its own. But again the four ladies have developed something of a system on how to deal with that.

Kody knows he can’t lose it with Meri because Meri would fight him on it. Hence he turns to Robyn when he has problems with the business because everyone knows she’s the best at handling him when he’s in a mood. And when it get down to it – that’s how his marriages work with all four of them.

Each of his wives has something special or unique about them that just goes into making everyday life simply better. Not just for Kody but also for the kids. And in return all they each have to do, to keep their relationship working, is validate each other when they need it the most.

Say one of them has a feeling one day or an opinion. It’s up to Kody and their fellow sister wives to ensure they feel validated and are not fobbed. Probably feeling like a nuisance. And looking back at Meri and Janelle – even while they had their issues – they always made sure to validate the other. Which really is another words for respect in the Brown household.

And that’s how it all works. Sure they’ll never be ok with the perception on plural marriage yet by appearing on their show they hope to change a couple of minds.