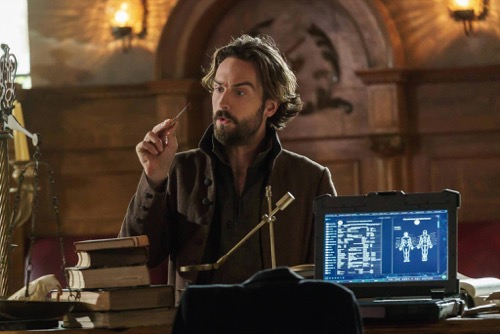 Tonight on FOX their mystery adventure drama SLEEPY HOLLOW continues with an all new Thursday November 5, season 3 episode 6 called “This Red Lady From Caribee,” and we have your recap below. On tonight’s episode, Pandora unleashes a monster that haunts Sleepy Hollow residents at night, which tempts Abbie (Nicole Beharie) and Jenny (Lyndie Greenwood) to face a painful chapter of their lives.

On the last episode, the FBI was flummoxed by a strange death, but Abbie and Ichabod searched for supernatural reasons to make their case to Dr. Temperance “Bones” Brennan and Agent Seeley Booth. Meanwhile, Pandora resurrected a British general; and the town was threatened by an army of undead soldiers. Did you watch the last episode? If you missed it, we have a full and detailed recap right here for you.

On tonight’s episode per the FOX synopsis “Pandora unleashes a monster that haunts Sleepy Hollow residents at night, which tempts Abbie and Jenny to face a painful chapter of their lives. Meanwhile, Ichabod draws on his own experiences to offer Abbie advice when she must make an important decision about her career.”

Tonight’s Sleepy Hollow Season 3 Episode 6 is going to be exciting, and you won’t want to miss. So be sure to tune in for our live coverage of Sleepy Hollow — tonight at 9PM EST!

Tonight’s episode of Sleepy Hollow kicks off with Crane on a date at a Japanese restaurant with Zoe– it’s not going well. Apparently they both read “20 Questions To Ask On A First Date.” Crane confesses that it has been quite a while since he has been on a date.

At the police station, Abbie’s boss Danny stops by her office – he wants to know if she has talked to her sister about Nevins. She hasn’t yet, but she promises him that she will set down with Jenny and Joe. He reminds her how important this case is, he doesn’t want anything to go wrong – there is a lot riding on it.

As usual, Pandora is hiding out in her lair and is up to something extra creepy. She is talking to a black flower, and calls it the “flower of fear.” She begins chanting and calls for a “red Lady From Caribee.” Pandora’s magic box opens and swarm of red bugs flies out, she calls to them to bring her the “fear of fear itself.”

An old man is sitting in his study late at night and he hears a buzzing sound – he tries to capture the bug in his coffee cup and it stings him. And then an entire swarm of the red bugs flies in to his study and proceeds to attack him – he can’t fight them off.

Abbie takes Crane to his court date, he is being charged with smuggling the artifacts in to the country. He insists that this whole thing is absurd, and they were his possessions so it couldn’t be smuggling. They head in to the court room, the judge is the old man that was attacked by the red bugs the night before. He is covered in a rash and shouting at everyone in the court room. The judge yells at the judge to shoot Crane. They get everyone out of the court room, the judge is rambling like a mad man about how you can’t trust anyone and everyone is undermining him. Then, he drops to the floor and dies. Crane says that whatever happened to him – he was “literally driven mad.” Crane says that whatever happened to the judge, “the foul creature is far from done.”

Abbie meets up with Jenny, she tells her that she needs to stop investigating Corbin and Nevins. She has to drop it because of Danny’s investigation. Jenny agrees, but she says that joe is not going to be happy about it – he wanted to learn the truth about his father.

Crane found a dead wasp in the courtroom, he brought it back to the archives to investigate. He explans to Abbie that the wasp hails from the Caribbean and is called a Soucoyant. One sting from it brings on extreme paranoia, until death overcomes. Abbie remembers a passage in Grace Dicken’s journal about General Washington’s camp – all of the soldiers were in a fit of paranoia, and Washington was on his death bed. Betsy Ross was able to save him from the fatal sting with an herb and tonic that she conjured up to slow down his death. The only way to stop his death though was to kill the wasp that had stung him.

The wasp strikes again, Danny and Abbie rush to the scene of the crime – the head of the PTA was killed after she checked out a stack of books from the libraries. Danny thinks that it is some sort of virus. Abbie can tell that she had the same wasp stings as the judge. Abbie calls Crane, she tells him that she thinks that the Sucouyant is after people that are authority figures. Danny snaps at her about staying focused at work and tells her to get off the phone. Abbie is confused by his behavior – she doesn’t realize that he was just stung by the wasp.

On the way back to the precinct, Danny begins ranting like a mad man – he accuses Abbie of trying to steal his job and undermining his case. He pulls the truck over in the woods and pulls his gun on Abbie – she manages to tackle him and handcuff him. She calls in reinforcements, Joe gives Danny a sedative and they tie him to a chair in case he wakes up.

Crane cracks the riddle in Betsy’s journal and comes up with a list of herbs that they need to make the potion to keep Danny alive until they find the wasps and kills them. One of the herbs on the list is a hard to get Caribbean herb calls Chadon Beni. Jenny thinks that she “knows a guy” and she and Joe head to some sort of shop owned by an old pal of her’s that specializes in Trinidadian witch craft. They haggle some of the herb from him, as he is packaging it up and hands it to Jenny he becomes possessed and his eyes go in to the back of his head. He growls at Jenny that “her soul shall be claimed.” He snaps out of it when Joe pulls Jenny away, when they leave he warns Joe to watch out for her – because her fate has changed.

Meanwhile, back at the archive building – Danny wakes up and is not happy that he is tied down. Abbie tries to explain that they are searching for the medicine for him. Danny is talking nonsense and accidentally confesses to Abbie that he is still in love with her – it obviously throws her for a loop. Down in her lair, Pandora is canoodling with the Queen of Soucuyant.

Crane has done some research, they need to find the Queen’s hive and destroy it in order to kill the wasps and save Danny. Abbie uses the locations of all of the stings to create a map to try and locate the Queen’s hive. While they head to the hive to look for the Queen of the wasps, Jenny and Joe go behind Abby’s back after they promised that they wouldn’t and they meet with Nevins.

Abbie and Crane arrive in a cave – they can hear the wasps buzzing. They sneak through the passageways in the underground building – and Crane finds Pandora talking to her creepy tree. He demands to know why she is “cultivating forms of terror.” Pandora scoffs that she wants to thank him and Abbie for cleaning up after her. While Crane is talking Pandora, Abbie is in the other room shooting fire balls at the wasps.

Crane tries to shoot Pandora with his crossbow, but she just catches the arrow and tosses it aside. Crane runs around the corner and Pandora doesn’t chase after him – she says that she has “no time to play” and gets back to playing with her tree. Crane runs and tells Abbie that the bees are not their biggest problem – Pandora is in the other room cooking up her grand finale.

Abbie and Crane finally manage to kill the Queen Bee, then they rush to Pandora. She tells them to “bear witness.” Her creepy tree opens up and there is a huge portal inside – Pandora walks inside and disappears.

Danny wakes up in the hospital – he doesn’t remember anything that happened after he got stung. Abbie lies and tells him that he had a major allergic reaction and they rushed him to the hospital and he has been “out of it ever since.” Crane rushes off to meet with Zoe for another date, he is determined to make this one a success. He tells her that they are going to keep it simple this time and just go far a walk. Zoe is thrilled, and vows that this is going to be their new “first date.”