So You Think You Can Dance Recap – Vegas Callbacks #1: Season 12 Episode 5

BY Kristine Francis on June 30, 2015 | Comments: one comment
Related : Reality TV, Recap, So You Think You Can Dance, Television, TV 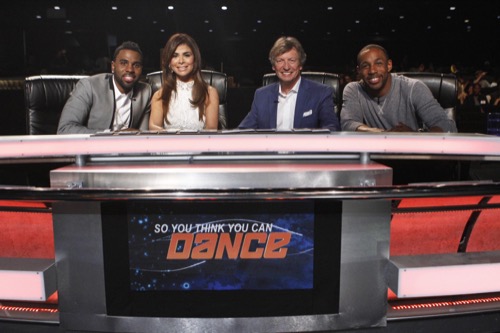 Tonight on FOX, SO YOU THINK YOU CAN DANCE continues with an all new Monday, June 29 season 12 episode 5 called “Vegas Callbacks #1” and we have your weekly recap below. On tonight’s episode the contestants go to Las Vegas for the first round of callbacks.

On the last episode, the search for the next dancer to take the crown headed to the Big Apple! Judges Nigel, Paula, and Jason took on New York to find out which stage and street dancers had what it took at the final audition stop before callbacks! Did you watch the last episode? If you missed it, we have a full and detailed recap right here for you.

On tonight’s show as per the FOX synopsis “the judges have searched the nation for the best of the best, and now Stage and Street hopefuls head to Vegas for the first round of callbacks.”

So You Think You Can Dance season 12 airs tonight at 8PM and you don’t want to miss it. Celeb Dirty Laundry will be live blogging the show, so don’t forget to come back to this spot at 8PM EST for our live recap!

Auditions may be over but the true test of whether or not these contestants can actually become overnight American Success stories is only now just beginning.

Over a hundred people arrived in Vegas and all the competition truly needed was ten stage and ten street performers. So, naturally, there were going to be cuts even on the first day. But just how many people lost out on their dream in less than 24 hours is kind of depressing.

Up first was Team Stage. Each of the contestants had to go back onstage and prove once again what exactly it was about them that made the judges choose them to begin with.

However, for many of these dancers, their nerves began to play havoc on them. And some of this year’s most talented (also featured) competitors proceeded to make the most silliest of mistakes. Thus, friends were separated and even that one engaged couple we’ve all come to love were forced to say goodbye to each other.

And the same went for Team Street. Remember Kenya from Detroit. She had a lot of confidence (especially when it came to flirting with Jason Derulo) and why shouldn’t she? Kenya was also known as “Standing O” and yet for someone with such a reputation you would never think she would be psyching herself out in the lead up to the minute solo.

Though, thankfully, she was on the many dancers to make it through the first round. But once they were done with “Minute Solo” they were then onto to the “Callbacks”.

Again, Street and Stage were split up. Only this time they were also going to be learning choreography from their team captains. Team Street had Twitch and Team Stage had Travis. And after both team had been giving sufficient enough time to learn what they had to do – they then had to hit the stage once more in groups.

And do you know hard it is to stick out in a group but for all the right reasons?

Both teams were to be judged by not only the official judges but their own captains as well. So their performance had to be strong enough to convince their respective captains that were actually worth the time and effort. Though, with the callbacks, many found it hard to keep up the choreography.

Team Stage were taken out of their comfort zone. If they were ballet or ballroom then they had to keep up with contemporary. And while some shined from the very beginning, Nigel ended up being disappointed with those he had put too much faith in.

So this year the judges went to back for the dancers they knew could impress.

They gave some of their favorites a second chance. As in, if they did exceptionally well in the solos then the judges were more than willing to overlook what followed. Even if it was just a complete disaster on stage.

But, later the judges were left floored when it came to Team Street. The guys on Team Street floundered with choreography. However the majority of the girls were actually on point. So during the thinning period – it was the guys that were living up to their potential.

Though there was that one dancer that had to be saved from a breakdown. Twitch took New Yorker Samantha aside and he did his best to instill her with some confidence. Because for a minute there she looked she was going to quit rather than try.

Plus, despite not making it, Samantha was glad to have given the competition her all.

And so it was on that high point that the first day eventually came to a close. Yet, for those that were left standing, they were told it was only going to get harder from here. They had completed Day one of callbacks but Day Two was the real test.

Team Stage had their Broadway auditions on Day Two. An Emmy winning choreography had been brought in to teach them the traditional Broadway callback. And, sadly, the choreography knocked out a few of the dancers while they were still in the rehearsal phase.

So here’s what happened to Team Stage: The medics had to arrive to escort someone to the hospital and there also had to be a medic onstage. Unfortunately one dancer attempted to dance through the pain and all that did for him was lay him out afterwards. Although the judges did decide to break their rule of no more leniency with him and allowed him to stay for another day.

Yet for the one guy, the one that injured himself, this was the end of the road for him. He walked, well more liked wobbled, crossed stage in crunches and proceeded to give a heartfelt farewell before he left. And for some reason I do believe he will be one of the guys to try out next year.

Hopefully, though, he won’t ever have to dance for his life.

If the dancers were proficient in practically everything other than the choreography – they were then given a rare chance to dance for their life. So Team Stage Moses came back after the Broadway audition had wrapped up and he performed a fast paced solo. One guaranteed to impress.

However Moses had on particular issue working against him. And, all joking aside, it really was hi face. He would start out looking fierce but as time passed he forgot all about it and that went on to work against him.

So Moses was allowed to stay but he’s pretty much used up all of his goodwill.

As for Team Street, it was B1 and Steven (the guy that supposedly looked like Bill Gates) that had to dance for their life. B1’s brother had already been sent home by this part yet B2 knew had to keep the dream alive for the both of them. Hence, when he hit that stage, he knew he had to give some of his best moves.

And luckily he was rewarded for it.

But for Steven, this competition meant proving something to his family because no one back home supports his decision to dance. In fact they’ve actually never seen him in his element. Yes, he’s invited them, but they’ve always seem to find one excuse or another to avoid it.

Thus, by sticking around or dare I say it eventually winning, guys like Steven can finally show people that their passion shouldn’t be so easily dismissed.

Twitch came to the competition just like these guys now and look where he landed? He’s currently in the latest Magic Mike film and I for one will be paying to see him and Channing. So you really never know.

And though Steven didn’t make it this time – maybe his parents should act like parents and comfort him when he gets back.