So You Think You Can Dance Recap – Decade of Dance Special Edition: Season 12

BY Kristine Francis on July 21, 2015 | Comments: one comment
Related : Reality TV, Recap, So You Think You Can Dance, Television, TV 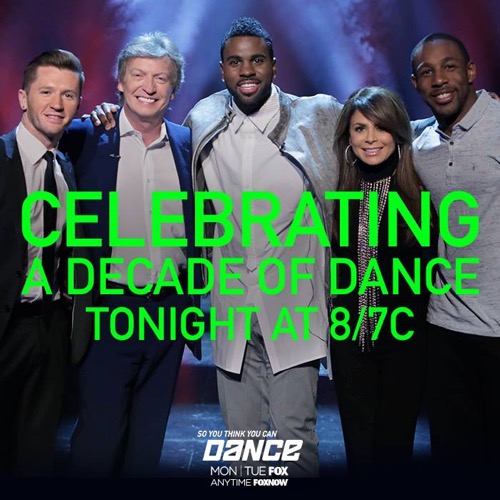 Tonight on FOX, SO YOU THINK YOU CAN DANCE continues with an all new Tuesday, July 21 season 12 episode 9 called “A Decade of Dance Special Edition”. We’ve got your recap down below. On tonight’s episode a 10th anniversary special features some of the series’ most unforgettable dancers and choreographers; current stage and street routines; and memorable musical productions.

On the last episode, the first voted of the season were in! Find out which Stage and Street dancers won the hearts of America. Did you watch the last episode? If you missed it, we have a full and detailed recap right here for you.

On tonight’s show per the FOX synopsis “Celebrating 10 inspiring years of SO YOU THINK YOU CAN DANCE, this one-time-only special will feature live performances by some of the series’ favorite dancers and choreographers, as well as present stage and street routines and musical productions from the last ten years.”

I know it doesn’t seem or for that matter even feel like it’s been ten years since we were first introduced to “So You Think You Can Dance” but it has. And now with over two hundred episodes under their belt, the show wanted to enjoy turning ten in the only way they knew how – through dance.

And so the first of the memorable performances the all-stars were asked to perform was a personal favorite of Nigel’s.

Remember “The Bench”. It was a heartfelt performance about a young man scorning the love of a woman by rejecting her sunflower. Welll, if you don’t then just know it was a great crowd pleaser. And it also was Season Two’s first Emmy win. So on tonight’s episode, Nigel asked Travis and All-Star Catherine to repeat “The Bench”.

And it was just as good as the first time it was debuted onstage.

However, for his selection, Jason Derulo chose to up the beat. And he picked a dance that he just so happens to be a favorite of both his and Michelle Obama.

See they both enjoyed the female empowerment they saw in Jasmin and Comfort’s routine “Who Runs the World” and admittedly that happens a favorite of mine as well. Not only was it a fast paced Hip Hop number but more importantly it brought back some of the stars we’ve all come to know and love – Jasmin and Comfort. Two women that were always able to work that stage to perfection.

But out of all the dances, the great Paula Abdul could have chosen she went ahead with Season Three’s “The Flower and the Humming Bird”. Another contemporary piece only this had more of a haunting aspect to it. And again it hold a special place in this competition because of the Emmy Win Wade Robinson received for choreography.

Jamie and Hok took the stage to perform this piece and, although it’s been few years, it’s pretty obvious to everyone that these two still got it.

Though tonight’s episode wasn’t all about who can still dance. It was also about the memories. Hence Cat introduced a special portion of the show that was purely dedicated to looking back at how far So You Think You Can Dance have come in the last ten years.

They watched a montage of the many people that tried out and kind of failed spectacularly. And they also watched footage from when Travis and Twitch were first introduced.

But finding out what happened to Cody was probably the best. Cody was a young man with special needs that had tried out and though he didn’t make into the competition – the Special Olympics found out about him from the show and they asked him to compete in the dance portion. So, ultimately, Cody still got to live out his dream to dance and I for one am glad he’s still competing.

Over the years, we’ve seen a lot of things and even new techniques but the one that Cat Deely ended up loving the most was K-POP. It seems she loved that routine “I Am the Best” and, returning to the stage, Mark and Jenna were able to remind her why it was such a stand-out performance to begin with.

When you think about it the show pretty much introduced new dance that was taking over the cities one at time. Other than finding out about K-POP, there was also Popping, Locking, Krump, Detroit Jit, Turf, Cranking, Waacking, Ball Hopping, Mutation, Puppeting, Exorcism, the Wobble (or I think it was the Wobble) and the Creep. The last being something many of us didn’t know existed outside of SNL. So this show turned out to be what changed it all.

And before they said goodnight, Twitch finally took the stage.

He was joined by Season 7 Alex and together they performed a Hip Hop number that was chosen by popular vote as a way to close the special. And that to me, maybe not to you but to me, was the perfect way to end the night.