So You Think You Can Dance Recap – Top 14 Perform + Elimination: Season 12 Episode 11

BY Joanna Mazewski on August 11, 2015 | Comments: one comment
Related : Reality TV, Recap, So You Think You Can Dance, Television, TV 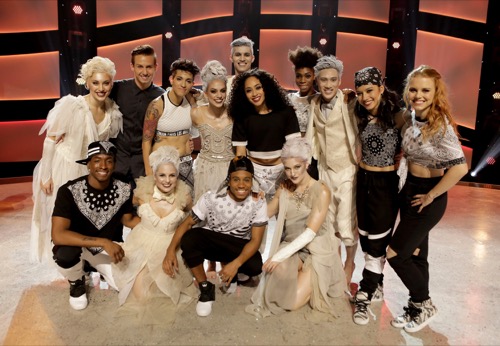 Tonight on FOX, SO YOU THINK YOU CAN DANCE continues with an all new Monday, August 3 season 12 episode 11 called “Top 14 Perform + Elimination”. We’ve got your recap down below. On tonight’s episode the Top 14 dancers perform, but the field is diminished by a double elimination.

On the last episode, teams Stage and Street found out who would stay in the competition for another week in the fight to become America’s Favorite Dancer! Did you watch the last episode? If you missed it, we have a full and detailed recap right here for you.

On tonight’s show per the FOX synopsis “the competition heats up with a double elimination as dancers from both teams fight to stay in the running to become America’s Favorite Dancer.”

Tonight’s episode of So You Think You Can Dance kicks off with the opening dance, and the introductions of Team Stage and Team Street. Host Cat Deeley takes the SYTYCD stage with the team captains Twitch and Travis. Cat reveals America’s votes, with 53% of the votes – Team Street is now in the lead. Next Cat introduces the judges, Paula Abdul, Jason Derulo, and Nigel Lythgoe.

Its time for the first performance of the night, Yorelis (Team Steet) and Jim (Team Stage) perform a duet together called “Asht.” They get a standing ovation from the judges. Nigel raves that it is clear to see why Sonya is an Emmy-nominated choreographer. He raves that Yorelis “just came out and showed us exactly why she was chosen for the competition.” Nigel adds that without question Jim is the “best technical dancer,” but he wants him to keep working on his technique. Jason agrees that Jim and Yorelis’ “synergy was electrifying.” He commends Jim for “continuing to keep it dope week after week.” Now, it is time to hear how America voted for Jim and Yorelis. Jim is in the top 10 – but Yorelis is in danger and could be eliminated at the end of the show.

The next duet to perform tonight is Yaya from Team Street and Edson dancing to Usher’s “She Came TO Give It To You.” Paula raves about their performance, but Jason Derulo disagrees – he says that it was “too basic” for this far in to the competition. He thought it was “cool” but that was it. Nigel agrees with Jason, he generally loves this type of dance, but he thought that it needed to be a little bit of tighter. He was happy to see that Yaya got to do some of her “whacking.” Now it is time to learns America’s votes, both Yaya and Edson are safe – they are in the Top 10.

Team Street’s Virgil and Team Stage’s Hailee hit the SYTYCD stage next to perform a duet to the song “Cellophane” by SIA. Jason commends Virgil on his performance, he is happy to see the reckless side of him, and not the happy-go-lucky Virgil. Nigel loved Virgil and Hailee’s characters, he is happy to see Hailee show a slightly crazier character on stage, but he says that Virgil showed a “lack of technique.” Paula disagrees with Nigel, she thinks that it was difficult for Virgil because Hailee is such a “bright light.” Paula thinks that Virgil has been excelling wonderfully. Cat prepares to read the results based on America’s votes – both Hailee and Virgil are in the Top 10 and they are safe this week.

Alexa and Ariana are up next, they take the So You Think You Can Dance stage and they perform a burlesque duet together. Nigel says that their burlesque routine was “interesting” and compared it to Liza Minelli, he says that Alexa and Ariana “missed the mark” and he shouldn’t have saw them smiling – he thinks they should have been a little more evil. He says that Ariana was “like a dead fish on a slab.” Paula says that Alexa and Ariana chose to smile at the wrong times, and should have been more “campy and sexy.” She says that if they don’t connect with a dance, then they need to “fake it until they make it.” Jason agrees that the performance was a “little rough,” and he could tell that they disliked the routine that they were given. It’s time for Cat to reveal the results based on America’s votes – both Alexa and Ariana are in danger and up for elimination.

Team Street’s Megz and Team Stage’s Derek are up next, tonight they are doing a duet to the hit song “Worth It” by Fifth Harmony. Paula says that she appreciated Meg and Derek’s effort – but it was definitely not her favorite routine. She says that Derek was “uncomfortable and awkward.” Paula thinks that Megz failed at being sexy and her pants needed to be tighter. She also thinks that it was ridiculous that Megz carried out a trumpet on stage – because the song has a saxophone in it. Jason doesn’t think this was even close to Megz’ worst performance, but he agrees that she had the wrong horn for the song. Derek thinks that Derek’s swag is totally “left field and not in the right ball park.” It’s time for Cat to reveal the votes from America. Derek is in the bottom and up for elimination, and Megz is in the top 10 and safe this week.

Gabby and Neptune perform a moving duet to “Lord Take My Hand” and get a standing ovation from the judges. Jason remains standing during his critique because he was so moved by them. Nigel agrees that their performance was moving, he raves that Gabby is his favorite stage dancer this year. Paula agrees that their duet was “stunning and beautiful.” Cat reveals the voting results – Gabby is in the Top 10, but Neptune is up for elimination tonight.

Team Stage’s Kate and Team Street’s JJ are performing next – they dance on the SYTYCD stage to the song “A Different Beat” by Little Mix and are dressed as pin-up girls. Nigel thinks that the routine did a good job bringing out their personalities, but the routine didn’t really show everything that they are capable as dancers. Paula critiques them and says that their dance was a “little immature.” Jason agrees he says that Kate and JJ seemed a little adolescent because of their bubbly smiles, but all in all he thinks it was a pretty good performance. Cat announces that according to America’s votes – JJ is safe, and Kate is up for elimination.

So far tonight there are six dancers up for elimination: Yorelis, Ariana, Neptune, Alexia, Derek, and Kate. Four of those dancres will be eliminated from So You Think You Can Dance tonight – and two will be moving on to the next round of competition. It is up to America to save them – and they are voting live on Twitter for the two dancers that they want to save.

Before we learn the live Twitter vote results, we get to see Team Stage and Team Street perform their group dances for the night. Team Stage is up first, and they get a standing ovation from the audience and judges. Their team captain Travis raves that their choreographer Sonya is amazing – and she worked magic with their group dance. Team Street is up next, and they perform an interesting freak show themed performance.