BY Kristine Francis on August 31, 2015 | Comments: one comment
Related : Reality TV, Recap, So You Think You Can Dance, Television, TV 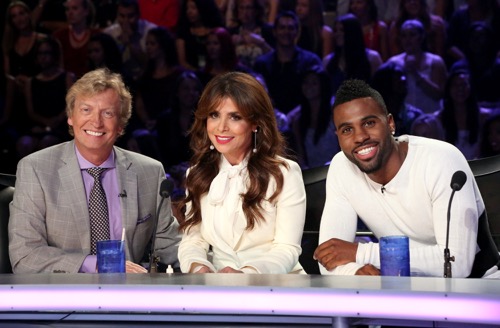 Tonight on FOX, SO YOU THINK YOU CAN DANCE continues with an all new Monday, August 31 season 12 episode 14 called “Top 6 Perform + Elimination”. We’ve got your recap down below. On tonight’s episode the Top 6 dancers perform, but two more contestants are eliminated.

On the last episode, each dancer was put to the test as the competition got more intense! Find out which Stage and Street dancers made the cut for the Top Six. Did you watch the last episode? If you missed it, we have a full and detailed recap right here for you.

On tonight’s show per the FOX synopsis “the competition gets fierce as the final four dancers are revealed. Which Stage and Street dancers have what it takes to continue in the competition?”

Team Stage has finally knocked Team Street of its mantle on tonight’s episode of “So You Think You Can Dance” and, with the contestants dwindling down, the pressure is on for everyone to deliver only their best.

The six remaining dancers were told tonight that they were going to be dancing duets with both the all-stars and their fellow contestants. On top of their creative solos. And unfortunately for these six that meant double their time in practice.

The solos have been a way to showcase each individual personal style. Therefore there’s never been any feedback from the judges about what they were doing. Whether it was good or bad. But, by throwing in this third dance, the judges figured if these guys could make it into the top six then a few more hours devoted to learning something new wasn’t going to be too hard.

However I was left worried by this latest addition to the program. This was the first season I ever watched and my first thought about the third dance was that something was eventually going to have to give for some of these dancers to play a game of catch up with just so many things in such short time span. And technically the show could have easily found other ways to kill the time.

And to an extent my worst fears were realized.

Dancing to “Emergency” by Icona Pop, Gaby danced with her all-star in a mashup of both ballet with a little bootylicious thrown in. And, thankfully for Gaby’s dad, there wasn’t as much of the booty as everyone thought there would be.

The footage of the practice actually made it look like that’s all the audience was going to see. Yet Gaby also showed technique and great footwork. And if there was only two judges sitting in judgement on this then it could have been written off a success.

But Jason just had to say something. He said Gaby was still great and that the one thing he didn’t quite agree with is that she lost some of her star power in the dance. Normally she would have everyone on their feet applauding her and this time she failed to achieve that because she “lost something”. Whatever that something is, by the way, because Jason pretty much left any type of explanation up in the air.

And although none of the other judges agreed with him, the criticism stuck.

Then performing his solo to LL Cool J’s “Rock the Bells” Virgil paid tribute to his mentor this week and went completely old school.

It was light-hearted and fun. And simply stood for everything that is Virgil. So it was a good solo and I personally wished others could have followed him in this vein.

Hailee was voted into the bottom four last week and that was a close call. But her solo was lackluster. She didn’t actually show off any of her skills and given the minute of dancing they all received – why did she spend so much of it on the floor if getting back up was going to be hard for her.

Yet Jaja being Jaja was still a sight to behold when she danced with all-star Alex. They were given this wonderfully moving piece about a woman with Alzheimer’s that was going to be remembering and forgetting her husband. And it simply left the judges on the brink of tears.

The judges loved it and Cat even offered to watch “The Notebook” with Jason if he felt in the mood. And he said he was.

So that was a great piece for Jaja. For it showed her in a great and versatile light. Which is something this competition is actively looking for. And it was because she was so great at many of the dances that Jaja was never pigeonholed like Megz proved to be.

Megz and her all-star for this week Joshua danced to Pharell’s “Freedom” and they were good. But they also danced a version of hip-hop and jazz. And it’s only when Megz is in her element that she can really shine.

And this downside of hers was very noticeable this week. So the judges kindly warned her about her it because to them her time on the show felt like it’s coming to a close.

Though Megz wasn’t the only one hearing the same old thing on tonight’s episode. Jim did better this time by finally showing off some of his talent during his samba to Fulanito – Chillando Goma with all-star Anya. Yet that didn’t change the fact that when he was on his own during the dance – he felt kind of flat. And no one wants to be called flat by the same people they’re trying to impress.

So Jim took two steps forward and one step back. And, when I saw this for myself, I instantly began hoping that it would be enough to get him eliminated this week.

Jim is like the guy that sneaks pass the main defenses. He gets different variation of the same criticism – almost every week – and the others are just too good to be sent home in his place. And if that happens – I will revolt.

Virgil is one of the top dancers and he’s simply loved every week. For everything he does. Whether it be his solo or his dance with all-star Melanie which ended up showing a different side to him when he dedicated it to our soldiers.

And Gaby can’t go home. Her solo was a great tribute to her uncle who first introduced her to tap. Plus it unfair to her to get paired up with Jim.

Gaby and Jim had a comedic Broadway routine. Only Nigel didn’t find it to be Broadway and he called the dance itself slapstick. He said it felt like it was more of a club routine. And that one of the things that ruined it all was the lack of chemistry between Gaby and Jim.

So is it really a coincidence that her worst performance just happened to be the one with Jim?

People generally don’t take a nosedive towards the end of the night. If anything they can be seen improving like Hailee and Megz. Hailee redeemed herself during her duo with the very hunky Robert. And maybe it was the kissing but she definitely threw herself 100 percent into the dance.

And the judges congratulated her for that. However her duo with Megz was both their shining moment. It was a Stacey Tookey original and it was just so beautiful. Hailee and Megz worked as each other’s light and dark.

And it redeemed them both.

Virgil and Jaja also performed together and they were good but they could have been great. Jason was apparently left disappointed by their routine and he wondered why Pharside and Phoenix didn’t take advantage of having the best dancers in the competition. Though it doesn’t seem a lot of people agree with Jason because he was booed right after he said this.

And the first person that was deemed safe turned out to be Jaja. Then she was followed by Gaby, Virgil and finally Hailee.

Thus, when it was announced that both Jim and Megz had been eliminated this week – I was so relieved that it nearly felt as if I had dodged the bullet myself.