BY Amanda Austin on September 7, 2015 | Comments: one comment
Related : Reality TV, Recap, So You Think You Can Dance, Television, TV 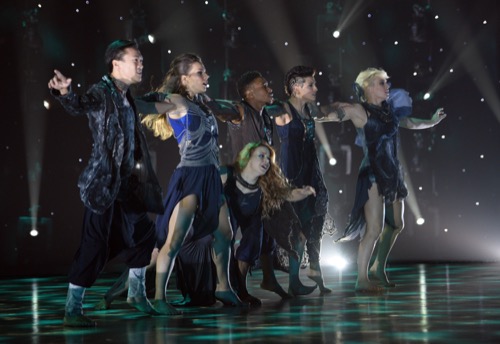 Tonight on FOX, SO YOU THINK YOU CAN DANCE continues with an all new Monday, September 7 season 12 episode 15 called “Finale Part 1: Top 4 Perform”. We’ve got your recap down below. On tonight’s episode in Part 1 of the two-part Season 12 finale

Tonight’s episode of So You Think You Can Dance kicks off with host Cat Deeley introducing the SYTYD judges: Paula Abdul, Jason Derrulo, and Nigel Lythgoe. Tonight is the final night that Team Street and Team Stage will be performing along side each other.

The first performance tonight is Team Street’s Jaja and Team Stage’s Hailee – they take the So You Think You Can Dance stage and dance to “Put It In The Bag” by Kalenna. After their performance, Nigel raves “It was a great fun routine. We are at that stage now where we don’t care about Street or Stage. I’m not sure you were really authentic, but I guess across the weeks you have both stolen my heart.” Paula adds, “I got to say that you both killed it with this style. You nailed it. Know what was really great? The two of you were having fun, it was intense and fun and I loved it.” Jason critiques, “Both great choreographers. I thought you guys did unbelievably well together, it was a strong performance. Hailee you had different levels and different characters. Jaja, you were more Street the entire time. But I thought it was married very well.”

Tonight’s next performance features Team Street’s Virgil and Team Stage’s Gabby. They take the SYTYCD stage and perform a number called “Slip” by Elliot by Elliot Moss. They have been rehearsing all week but Virgil is a little nervous because there are some lifts involved and he is shorter than his partner. After their number, Paula is up first. She raves, “I loved the floor work I the beginning. I know with the lifts, because you’re so tall, it worked. The table top and the body roll and slipping through his body like that was incredible. It was really yummy, fun, and interesting. The two of you rocked it.” Jason adds, “Not only was the choreography great, it was unique, and the lifts were unique. It’s so fly when you see lifts you have never saw before. We’re doing Street VS Stage, but that was the perfect blend of harmony.” Nigel agrees, “I loved the one where you turned around sharply – the catch was terrific. Gabby you have been investing for years and it is truly paying off for you right now.”

Team Street’s Jaja and Team Stage’s Gabby take the So You Think You can Dance stage next and perform “Woman” by Joy Williams. Jason Derulo raves, “Man that was so strong. Personally, I like everything with Hispanic feels. You guys didn’t need a guy at all, there was so much strength with the split personality thing. Nigel adds, “Joy Williams is terrific, I think both of you were really passionate with the moves. But, Jaja you need to relax your body more. Obviously it stood out in this routine more than others. Don’t point your toes. Both of you, terrific to see you dancing together. You’re both my favorites in this competition.” Paula adds, “Because there is not enough time to get an emotional connection, the light shined a little more on you Jaja in terms of training. Just watching the routine, it takes an athlete to dance – but an artist to be a dancer. Both of you are artists.”

The final two performers from Team Street, Virgil and Jaja team up together for the next performance: “I Love You” by Woodkid. After their performance, Nigel is up first, “It’s really good to see that Stacey didn’t back up choreographing you. Virgil, they can make fun of your size as much as they like, but you dance to the extremes of your body and then some. Jaja, remember a couple of years ago when you surprised me with the Cha Cha? You have been amazing this season in what you have done. As performers, you out shine, I just love the pair of you.” Paula adds, “All I can say is where you started and where you are now – the two of you must be proud of yourselves. It’s so important that you keep on mastering your technique. That’s really important, and you will always be able to fall back on your technique.” Jason comments, “I have to commend both of you, both of you have grown so much. You guys are like totally different dancers now, even your bodies look different. That’s all due to your hard work. Congratulations!”

Team Street’s Virgil and Team Stage’s Hailee are up next with a jazz number. After their quick paced routine, it’s time for the judges’ critiques. Paula comments, “That was so much fun, you nailed it with the fun. Great timing too, you stayed in time. Virgil when you came and slid right behind her was wonderful, it added a whole light-hearted feeling towards it. That made me smile. Virgil you are getting height in your jumps. And, Hailee don’t change – you command the audience.” Jason agrees, “Yeah it was fun. The thing about Broadway is it is character driven. Hailee I feel like you lost it in some places. You were smiling in paces that I felt like you shouldn’t be smiling. I do feel like I have seen you both better than that performance, but still good.” Nigel adds, “I sort of see where Jason is coming from – Hailee you should have been a bit more angrier.”

Now, it is time for the final four dancers to perform one last brief solo on the So You Think You Can Dance stage for America’s votes. Gabby is up first, she straps on her tap shoes one last time for a performance titled “Maghalena.” For Virgil’s final performance, he dances to Trick Daddy’s anthem “Let’s Go,” with the help of his coach Joshua. Virgil gets a standing ovation from the SYTYCD judges. Nigel screams that he wishes they had the song when he was a kid because he “would have killed it.” Paula agrees, “That movement was incredible – the cart wheel was ridiculous. You were heroic and that’s powerful.” Jason says that they are out of time, so he just jumps up ad starts shouting “Let’s Go!”

Up next is Hailee performing a jazz number to a popular Janet Jackson hit. Paula raves, “You have developed such a style with you, you dance with ferocity and that is what makes you stand out. I don’t know if that routine challenged you – but you hit every movement with intent. You’re kind of like the match that lights the flame.” Jason adds, “You were given a powerful song by Janet and you brought the power. I would have liked a little more fire, or a little more grit. What you have done today, looking at today as a whole picture is really unbelievable. You have one 5 whole numbers today, to get that all done in one week is impressive.” Nigel agrees, “You danced that beautifully. This night is a real competitive night and you have given 100%.”

Jaja is up next, for her final performance she dances to “Kaolo” by Yellow Claw, with the help of SYTYCD alum Cyrus. Jason Derulo shuts, “Jaja you went mod today! Good luck America, I am glad you are doing the voting – I just can’t.” Nigel adds, “I am not a great fan of sequels, and that was a sequel of what Cyrus and Twitch did. Tonight’s routine was great, it just wasn’t the follow-up that I wanted for you. Jaja you are so good at this style, I just don’t think it was strong enough. This routine just wasn’t enough, do something new.” Paula agrees, “I don’t know any other girl who could fill your shoes to do that. In that sense it comes off effective. But, I understand where Nigel is coming from. Animation is hard, so much harder than it looks. You nail it every time, no one else is like you.”

The final performance of the night is Team Stage’s Gabby tap dancing with a former SYTYCD alum Zack. Nigel is up first, he raves about the choreography and then comments, “I can’t believe we almost didn’t take you on this show. The very fact that you didn’t give it up and you came back is enough for me to just keep my fingers crossed for you. You have something very special that I can’t put my finger on. It is beautiful to see. Congratulations.” Paula adds, “It was as if I was in a different place and time. It was magnificient. Everything in your feet was powerful, it was almost as if you were creating the music with your feet. Every little gesture really went through you and displayed like a tornado. You are that good my dear. Amazing!” Jason is out of time again, he rambles “As a tapper I know the impossibility of going from step to step to step. It’s crazy.” He closes with, “You deserve a standing ovation,” and he climbs up on the judges’ table and cheers for Gabby.