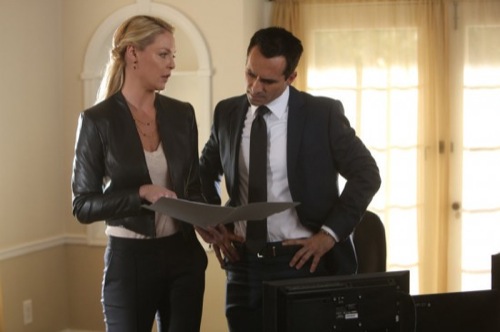 Tonight on NBC State of Affairs airs with an all new Monday January 19, season 1 episode 9 called, “Cry Havoc,” and we have your weekly recap below. On tonight’s episode a high-stakes investigation puts the focus on proving a sorority girl is in fact a member of a terrorist cell. Meanwhile, Charlie [Katherine Heigl] faces a possible betrayal, and Nick Vera [Chris L. McKenna] inches closer to contacting Omar Fattah.

On the last episode, after FARC (The Revolutionary Forces of Colombia) kidnapped Jack Dawkins (guest star Derek Ray) from a Panamanian prison and held him for ransom, the team had to pinpoint his location and extract him before time ran out. Charlie (Katherine Heigl) returned to Langley to coordinate the Bellerophon op, while Maureen (Sheila Vand) struggled to fill her shoes as President Payton’s (Alfre Woodard) briefer. Constance and Marshall (guest star Courtney B. Vance) fiercely debated whether or not to use Dawkins’ potential rescue as a political win against her mudslinging opponent, Kyle Green (guest star Melinda McGraw). There were hundreds of thousands of ar rissalah photosand the team was overwhelmed with the shear number of possible leads. To complicate matters further, the DC bomb squad removed a suspicious backpack marked with the ar rissalah symbol in front of the Washington Monument. Back in the Middle East, Nick (guest star Chris L. McKenna) and Al Moosari (guest star Nick Shakoour) were on the move to meet with Fatah, but not before Nick was put through a number of tests. Did you watch the last episode? If you missed it, we have a full and detailed recap right here for you.

On tonight’s episode as per the NBC synopsis, “Charlie (Katherine Heigl) and the PDB team race to prove that sorority girl Stacy Dover (guest star Gracie Dzienny) is, in fact, an active member of Ar Rissalah’s American terrorist cell. Amidst the high stakes investigation, Charlie is forced to confront the fact that one of her closest allies may have betrayed her. Meanwhile, Operation Bellerophon is in full swing as Nick Vera (guest star Chris L. McKenna) gets one step closer to contact with Omar Fattah. But Charlie’s efforts to bring down Ar Rissalah may not be able to prevent an attack on the homeland. Alfre Woodard, Adam Kaufman, Sheila Vand, Cliff Chamberlain, Tommy Savas and David Harbour also star. Guest starring Nestor Carbonell, Courtney B. Vance, Farshad Farahat and Melinda McGraw.”

This is definitely one series that you don’t want to miss. Don’t forget to stay tuned to Celeb Dirty Laundry where we will be live blogging every episode of State of Affairs first season. While you wait for the recap, check out a sneak peek of tonight’s episode below!

Charlie has a bad feeling on tonight’s all new episode. She told her colleague she feels like something is going to happen and right when she needs her team the most – they’re falling apart on her. Lucas made his assessment to the Bureau and somehow that translated into them not wanting to bring in Stacey Dover for questioning. “Insufficient evidence” they said. So naturally Charlie blamed Lucas. She used the fact he hasn’t been himself lately against him. And that in turn made him angry at Maureen seeing as she’s the only one that could have told Charlie about his recent condition.

So Charlie’s people are messing up on her and the sad fact is none of them are willing to admit they’re in the wrong. Lucas is one edge and Kurt is hiding something as well.

Hence the only person Charlie can rely on is POTUS. She went to Payton intending to have help in overruling the Bureau’s decision, but the bureau wanted to sit in on the meeting as well. So the result was they now had to work together. Poyuse apparently wanted to play it safe by not picking favoruties.

But Charlie and the Bureau having to work together to find the evidence against Stacy isn’t going to be enough it seems. Fast forwards a few hours and there you’ll find Stacey had already moved against her country by becoming a suicide bomber.

As for Charlie, she had Navaro about someone threating her and he promised he’d handled it. Yet, he also wants some guarantees in exchange. Because, frankly, Navaro is getting tired of trying to learn her secrets. Either they’re working together or they’re not!

In the meantime, though, he told her he was going to be polygraphing her whole office. And that has put some of them on edge. Even the ones that aren’t hiding something.

Maureen had spike results when she was asked if she was sexually interested in anyone at the office. But Kurt remained calm throughout his entire session and Charlie knew that was wrong because the Kurt is a terrible liar and yet nothing registered when he was asked if he ever caught Lucas drinking. So right away she knew who had been spying on her. Though the why shocked even her.

Senator Kyle Green and Kurt have apparently been working together. It seems while he was honesty worried Charlie had something to do with her fiancee’s death – Kyle just wanted leverage. And the senator wasn’t done with using people to get her way.

She also contacted Aaron’s father to give him the guilty picture of Charlie. And if she wanted to mess with the president’s family – that’s exactly what she accomplished.

So someone needed to have a talk with the good senator and Navaro chose to be the one to do it. He asked the senator to make an at home visit and after a heated argument – she was storming out when Stacy suddenly showed up. Stacy had found out about Navaro’s safe house by sleeping with his bodyguard earlier and hours later she showed up with a bomb.

The Senator was killed outright but Director Navaro was badly injured. So, as he was in surgery, the president was told she had to show strength. She collected as many home grown terrorists she could in one major round-up and then proceeded to go in front of cameras and make it seem like all of her “militarized” actions did eventually bear fruit.

Hence the president got to walk away from the entire incident looking like an avenging hero but two people are dead, one injured, and Kurt who was fired ended up getting a job offer from Victor Gantry. So are they really winning this war because it does’t look like it.

Nick later contacted Charlie and gave her a highly prized an rare picture of the number one terrorist in the world. But is that going to be enough to find and kill him?