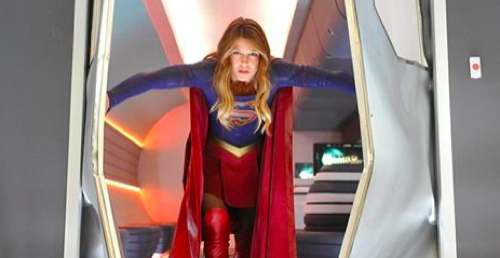 Tonight on CBS Supergirl starring Melissa Benoist airs with an all new Monday December 14, season 1 fall finale called, “Hostile Takeover” and we have your weekly recap below! On tonight’s episode, Kara (Melissa Benoist) faces off with Astra  (Laura Benanti) after her aunt challenges Kara’s beliefs about her mother; and Cat (Calista Flockhart)  is threatened with being removed as the CEO of CatCo after a hacker exposes her private and damaging emails.

On the last episode, Kara and her friends had to find the inner strength and courage to help during a disaster when an earthquake struck National City, leaving Supergirl powerless. Meanwhile, Alex’s mistrust of Hank reached a breaking point when they end up trapped in the DEO with an alien escapee. Did you watch the last episode last season? If you missed it, we have a full and detailed recap right here for you.

On tonight’s episode as per the CBS synopsis, “Kara goes toe-to-toe with Astra when her aunt challenges Kara’s beliefs about her mother. Also, Cat is threatened with being removed as the CEO of CatCo after a hacker exposes her private and damaging emails.”

This is definitely one series that you don’t want to miss. Don’t forget to stay tuned to Celeb Dirty Laundry where we will be live blogging the Supergirl season 1 episode 8. What are your thoughts on Supergirl so far? Sound off in the comments and let us know!

Aunt Astra was back in town on tonight’s Fall Finale but fortunately for Kara the other woman didn’t seem all that intent on hurting her.

In fact Astra tried to enlist Kara. Apparently Astra believes she and her army are meant for bigger things on planet Earth and she wants Kara to join her on the holy mission. And while it wasn’t Kara’s first instinct to hurt her aunt, she didn’t actually believe the other woman when she claimed to have only good intentions.

Kara remembered what happened on Krypton. Astra claimed to have good intentions then as well yet she went on to bomb government buildings. So the Kara that is now Supergirl managed to find a way to escape her aunt and aunt’s minions when they thought they had her cornered. And then she made her way to the DEO headquarters where she warned them about her Astra’s return.

However the DEO and in particular Alex didn’t want Kara to fight Astra. Alex later said that she didn’t think Kara would be able to hurt her own aunt. And that’s how she phrased it. With family lines clearly defined. Alex said if Kara could only take it easy on her during practice then she’ll never be able to fight Astra much less defeat her.

So Alex as the voice of the DEO told her to sit the battle with Astra out. And that was Kara’s plan. She had gotten called into the office after her boss Cat Grant had been hacked and Ms. Grant had made her personally responsible for reading through all personal emails. You know in case there was anything that could damage CatCo hidden there.

But just as she found out who had hacked Ms. Grant, her Aunt Astra suddenly appeared near her office basically calling her out.

Astra was looking for a fight and Kara didn’t want to let the DEO handle it. So she changed into her superhero gear and she flew up to fight her aunt. And the ensuing battle caused massive damage to the city but Kara did win.

Then she handed over her unconscious aunt to the DEO and got back to work. Kara it seemed had “overheard” the chairman of the board crowing about what he did to Ms. Grant therefore she knew he was the one behind the hack. Yet she couldn’t use either alien ears or hr super hearing as an excuse for getting him fired.

So she came up with a plan that involved Jimmy and Winn. And the boys just couldn’t resist a little corporate espionage.

They broke into Dirk Armstrong’s office and, while they kept him busy elsewhere, Winn talked Jimmy through copying some files. And Jimmy created a credible excuse after their plan went awry after Mr. Armstrong returned to his office earlier than planned. Though what they found on Armstrong’s computer kind of came as a shock.

Apparently no one had known about Ms. Grant’s eldest son, Adam. She had him when she was building CatCo and she had gotten in a nasty custody battle with her ex when finally she came to decision to let Adam stay with his dad. She said she realized that she had been working 24/7 at the company and that she wasn’t enough for Adam. So she made the tough choice of walking away because she also knew he deserved better.

And that made Kara think about her own mother. Kara was the only person that Astra wanted to speak to in prison and so she had gone to visit her aunt there. However Astra revealed some things that Kara hadn’t known about her mother.

Like how Alura had used her own daughter to lure Astra out of hiding where she could then arrest her. And that Alura knew her planet was doomed but didn’t believe Astra when she said she had figured out a way to save Krypton. So Kara was upset of course.

She felt like there had been a way for her to keep her family and that her mother had ignored that. Yet Alex got her to see that she was only hearing Astra’s side. And once she had heard how far a mother was willing to go for their child from Ms. Grant – she stopped viewing her mother as someone that had let her down.

Though by the way she was able to fix all of Ms. Grant’s problems with Armstrong – she did kind of let another person in on her “secret”.

Ms. Grant had wondered about how Kara was able to overhear Armstrong seeing as he had been halfway across the room. And then she simply connected the dots. Like how Kara and Supergirl are never in the same place at the same time.

But Kara didn’t have the time to freak out. The DEO had come to the conclusion that Astra had only gotten herself caught as a way to distract them while her husband went about breaking into Maxwell Lord’s office.

So until this season picks up again, we’re going to have to wait and see how Kara’s battle with her uncle ended.