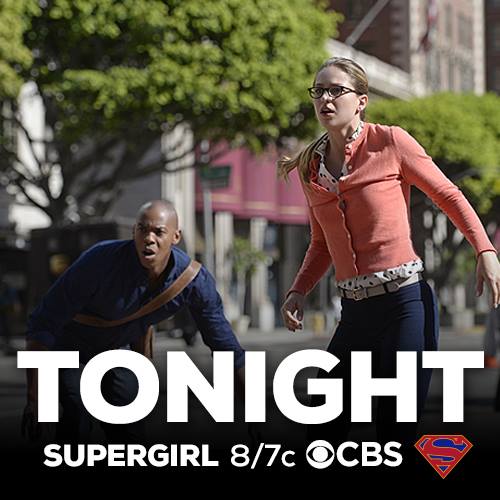 Tonight on CBS Supergirl starring Melissa Benoist airs with an all new Monday December 7, season 1 episode 7 called, “Human for a Day” and we have your weekly recap below! On tonight’s episode, Kara (Melissa Benoist) and her friends must find the inner strength and courage to help during a disaster when an earthquake strikes National City, leaving Supergirl powerless.

On the last episode, Stress and anger got the better of Kara when she went too far during a training exercise with Red Tornado, a military cyborg commissioned by Lucy Lane’s father, General Sam Lane. Elsewhere, Cat’s tough exterior was shaken by a visit from her judgmental mother, Katherine; at the same time, Alex enlisted Winn to investigate her father’s mysterious death. Did you watch the last episode last season? If you missed it, we have a full and detailed recap right here for you.

On tonight’s episode as per the CBS synopsis, “Kara and her friends must find the inner strength and courage to help during a disaster when an earthquake strikes National City, leaving Supergirl powerless. Meanwhile, Alex’s mistrust of Hank reaches a breaking point when they end up trapped in the DEO with an alien escapee.”

This is definitely one series that you don’t want to miss. Don’t forget to stay tuned to Celeb Dirty Laundry where we will be live blogging the Supergirl season 1 episode 7. What are your thoughts on Supergirl so far? Sound off in the comments and let us know!

The fight with the Red Tornado last week has temporarily stripped Kara of her powers on tonight’s all new episode of “Supergirl”.

So the real question or in this incidence the real problem is can National City survive a couple of days without its Supergirl? And unfortunately the answer is no. While Superman has also had to lose his powers which, according to Jimmy, he termed as “Solar Flares” – the sad fact is he can get away with it but his cousin is somehow held up to higher standards. That in truth are nearly impossible for her to uphold.

Therefore when the city was hit with a massive earthquake, Maxwell Lord took the opportunity to denounce Supergirl in front of the cameras. He said she was the most unreliable superhero in the world and that the people of their city needed actual help. Rather than simply relying on an alien in a cape.

And the sad part if Kara felt would have helped if she had been able. However, without her powers, Kara was also injured in the earthquake. A problem she’s never had to deal with before.

So she returned to work as way to possible help out even if she had to do it as a human and Cat assigned her to go out into fields with Jimmy. And to be frank that was probably the worst place for Kara to be. Because there she had to see for herself groups and groups of people that she was too human to help.

There was a young woman that was involved in car accident and her passenger had been knocked unconscious. So Maxwell Lord and Jimmy tried to do the best they could but what the woman was for Supergirl to fly in and take her friend to the hospital. And when that miracle didn’t happen, the guys ultimately had to tell her that they could no longer help. Her friend was too far gone.

And so Kara later did something ill-advised. She had initially tried to ride out the disaster as Kara Danvers but witnessing so much devastation had taken a toll on her. So although she didn’t get her powers back yet – Kara put on her cape.

She had heard about a robbery in progress so she just stepped in and was able to talk an armed man down before he could hurt anyone. Which is really what superheroes because, like Cat ultimately said in her live stream, it doesn’t always have to take powers.

Yet while Supergirl was carrying out her job despite her setbacks, Alex was trapped in a lockdown with a boss she no longer trusts.

Alex and Kara had found out before the earthquake that Henshaw had been the last person to see their dad alive. So naturally they found it suspicious that Henshaw had never mentioned it to either of them. And when a Kryptonian busted out of its cell, Alex too that opportunity to finally reveal to Henshaw that she knew more than she let on.

Jemm who was a mind controlling Kryptonian had wanted to break out the rest of the prisoners in the DEO cells so that they could all make it out together. However what was stopping him was the many DEO protocols/ locked doors that had been in place. So a team of agents had been sent in to bring Jemm down and, honestly, Alex hadn’t been one of them.

But she had broken rank in order to get herself inside and once there she had handcuffed Henshaw in order to meet Jemm one on one.

And thus Alex had been taking an extraordinary risk when she did that. Although she had never expected that Henhsaw would break out of his handcuffs and use his own powers (such as super strength) to stop Jemm. So Alex ended up learning a thing or two.

Plus she had some questions. She asked Henshaw what he was and he explained that he wasn’t actually Hank Henhsaw. He was in fact the last son of Mars, he was J’onn J’ozz. An alien refugee that had tried to live peacefully on planet earth when the DEO began to hunt him in hopes of terminating him.

So Alex’s father had stepped in and he had saved J’onn from the real Hank Henshaw. And that was at the cost of his own life. Therefore J’onn had made him a promise. He had told Danvers that he would protect Alex as if she was his own and afterwards he took on Henshaw’s identity as a way to reform the DEO from the inside.

And later he had recruited Alex as a way to watch over her. So now he wants Alex to keep his secret. Even from Kara.

Thankfully Kara’s powers came back and she was able to help the city return to normal. But it’s going to take some time for Kara to win back the city on a personal level. It seems they had come to depend on her and when they needed her the most – they had felt abandoned.

So Kara said she was going to do better however her aunt and some of her aunt’s goons had paid her an untimely visit.