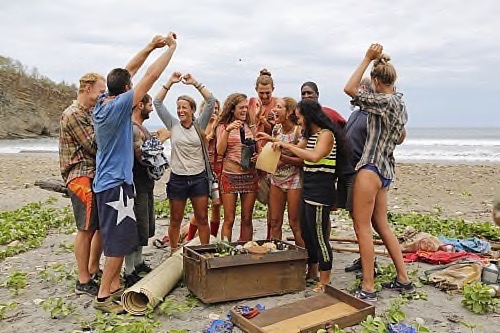 Tonight on CBS their Emmy Award-winning series Survivor 2015 Worlds Apart airs with an all new Wednesday April 1, season 30 episode 7 called, “The Line Will Be Drawn Tonight,” and we have your weekly recap below! On tonight’s episode, another castaway is voted out of the game.

On tonight’s episode as per the CBS synopsis, “alliances are tested as castaways must adapt to playing an individual game after the merge. Also, castaways fight for individual immunity in a classic game of endurance.”

Tonight’s season 30 episode 7 looks like it’s going to be great and you won’t want to miss it, so be sure to tune in for our live coverage of CBS’s Survivor 2015 Worlds Apart episode at 8:00 PM EST! While you wait for our recap hit the comments and let us know how excited you are about season 30.

#Survivor starts back at camp after the blindside. Tyler says he, Rodney and Joaquin were bamboozled. He says the blue collars voted with symmetry despite their differences. Mike knows Rodney is pissed and wants to do damage control. He takes Rodney for a walk. Mike’s worried the blindside will cause a riff. Rodney says he went behind his back but Mike says they were worried Joaquin was reeling him in but Mike says he was making a fake alliance to benefit the blues.

Rodney says he was just acting, putting on a DeNiro. Next day, over at Nagarote, tree mail arrives that indicates a merge. Someone else says it sounds like a reward. Both tribes meet up at the beach but they see no challenge and no Jeff. They see a note saying they’ve #Merged and a feast along with new buffs. They are told their camp is now at Escameca. They want to hear about Joaquin and they tell them the bromance is what got him booted.

Carolyn says if you show a strong bond, you will get broken up. She says she and Tyler have to keep their alliance hidden so they don’t get broken up. Back at the camp, they see that everything has been cleared out. They have to start completely from scratch. Kelly chats up Mike and she’s excited to be back with the blue collars. Mike says they’ve been counting on her coming back. He says they have five blues and need to pull two more then they can run the numbers.

Jenn says she never trusted Kelly and knew she would go running back to them. Hali and Jenn talk about pulling in Shirin with them. Joe says he’s glad he dodged a bullet and is happy to be back with some no collars. The girls ask him if Rodney’s smart and he just rolls his eyes. Will walks with Rodney who says he felt disrespected when they voted out Joaquin. He wants to make new alliances to punish the other blue collars. They then go talk to Carolyn about making numbers.

Rodney says he’s going after Sierra, Dan and Mike. Carolyn says Rodney is talking final four and she mocks his accent. She says his plan includes Will, Kelly and the two of them for final four. Tyler then goes to chat with Carolyn and they agree to stay apart but stay tight. He says they should go after Rodney and she says Rodney already came to her. The tribes wake the next morning to the rooster crowing. Dan says he just got stung by a jellyfish.

Mike talks about #Merica and says that’s what they should call their tribe since they are a melting pot like America. Hali says she likes the tribe name. They work on a new banner. Shirin thinks it’s the worst tribe name ever. She says it looks like they don’t know the name of their own country and says Mike is a moron for coming up with this. Mike chats up Rodney about voting Joe out. Mike says he’s doing “Rodney maintenance.”

Rodney is still mad that they didn’t trust him and voted Joaquin out. At the first individual immunity challenge, Jeff takes back the immunity idol and reveals the immunity necklace. Tonight is one of the dreaded hang on to the pole challenges. Dan is in trouble right away and so is Will. Dan falls then Will. They both take a seat. Tyler also drops down. Sierra starts to slide because she’s sweaty. Sierra drops to the ground. Kelly is struggling but then Shirin falls then Kelly.

Half are gone right away. Joe, Rodney, Mike, Carolyn, Hali and Jenn are still in it. Rodney tells them he can’t hang anymore but then Mike lets go after he can’t make an adjustment. Rodney is hanging at the bottom of his pole then falls. That leaves Joe, Carolyn, Hali and Jenn. Three no collars and one white collar. Jenn got stung by something right on her lady parts. Jeff asks if she’s laughing or crying and she says a little of both.

Hali loses it then falls. Joe, Jenn and Carolyn remain. Rain starts to fall. The rain picks up and it’s coming down hard along with wind. Jenn slides down to the last foothold. She falls. It’s Carolyn and Joe with an hour into it. Joe has to readjust. Jeff says it all comes down to how badly you want it. Carolyn also readjust down and is sliding toward the last foothold. She gets her feet into it while Joe is still at the top of the pole hanging tight.

Carolyn falls and Joe takes the first individual immunity. Rodney is not pleased with that outcome. Jeff puts the individual immunity necklace on Joe and tells the others that someone is going home tonight. Jenn wants to go after the no collars and white collars first. They head back to camp and Mike says Joe “the golden boy” won immunity. Mike is now thinking they should go after Jenn or Hali. Dan and Mike talk about voting out one of the girls and they need to bend to Rodney.

Rodney thinks he has Will. They agree to tell Will to vote Hali but then they will vote Jenn so it’s a test to see if Will votes like they agreed. Kelly talks to Carolyn and they also agree that Jenn and Hali need to be split up. Meanwhile Jenn and Hali go to work on Shirin and the three of them talk about going after Kelly. Shirin says if blue collar gets the vote tonight, they can run the game. Mike goes to talk to Tyler who says it’s hard to trust them.

Tyler says if they loop him in, he will play with them. Tyler says it’s always fantastic to have options especially when he thought he was going home. Jenn and Hali tell Tyler they want to join white and no collar to go after Kelly from the blue collars. Tyler says he can’t trust the blue collars but doesn’t know them either. He goes and chats up Carolyn to find out what she’s heard. He tells her about going after Kelly. Hali and Jenn are wondering if they’re going after them and then tells Hali she has an idol.

They head to #TribalCouncil and Jeff welcomes them. Will says Jeff could get voted out tonight and tells him he hopes he has an idol. Joe says it’s stab or get stabbed and you can’t take it personally. Will says when they got back he figured out which way he needed to vote to show he can be counted on. Mike says the white collars can be important swing votes. He says the vote tonight comes down to alliances. Tyler says he’s been approached by multiple people.

He says he has to figure out where to make a home for the rest of the game. Carolyn says lines will be drawn tonight and says she hopes they make the right decision because it’s hard to go back. Shirin says she doesn’t see herself as a swing vote and says they’ll know what’s up once the vote happens. Jenn says there is chaos and then a constant rumor so you have an idea of what could happen. Rodney says he hasn’t heard anyone speak about an immunity idol.

Jenn says she’s nervous and doesn’t know who is on who’s side. Dan says people have a good idea where votes will lie and says the lines will be drawn with a chain saw. Jeff calls for the vote. We don’t see any of the votes. Jeff goes to tally the votes then comes back and calls for hidden immunity idols before he reads the votes. Jenn plays hers. She says she really doesn’t want to go home tonight. Jeff says votes for Jenn won’t cast and Shirin smiles.