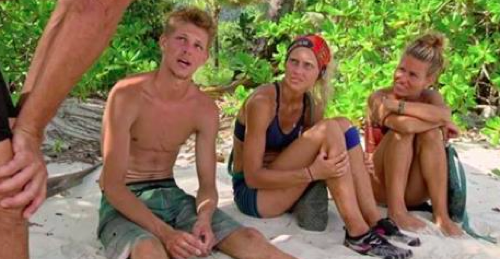 Tonight on CBS their Emmy Award-winning series Survivor Cambodia airs with all new Wednesday December 9, season 31 episode 13 called, “Villains Have More Fun,” and we have your weekly recap below! Tonight, another castaway will be voted out of the game and tensions rise as the castaways scramble to secure their place in the final three.

On the last episode, emotions ran deep when loved ones visited the island, and a desperate reward challenge left castaways’ heads spinning. Also, exhaustion took a serious toll on one castaway in the middle of an immunity battle. Did you watch the last episode? If you missed it we have a full and detailed recap, right here for you.

On tonight’s episode as per the CBS synopsis, “with the end in sight, castaways scramble to solidify a plan for the final three. Also, a frightening incident at the immunity challenge sends shockwaves through the entire tribe, and castaways are rewarded with a spiritual recharge at the temples of Cambodia”

Tonight’s season 31 episode 13 looks like it is going to be great and you won’t want to miss it, so be sure to tune in for our live coverage of CBS’s Survivor Cambodia at 8:00 PM EST! While you wait for our recap hit the comments and let us know how excited you are about season 31.

#Survivor starts on night 32 at Orkun as the Tribe comes back to camp after Joe was sent home. Abi talks smack and says everyone is glad to see him gone. Kelley says they now have an equal shot at winning challenges. Keith is shocked they didn’t tell him about Joe’s vote.

He now has to talk to some people and then the tribe recounts the votes. Tasha knows that Keith voted for her and now she says he has a target on his back and she’ll be keeping an eye on him. Jeremy talks about three Hunahpu being in this final group.

Wentworth wonders what’s the best strategy now. Spencer and Jeremy talk and he says he thinks they’re in trouble and has remorse about sending Joe home since the girls are now the majority. Spencer says he worries about Tasha and they agree to talk to her and Kimmi both.

Spencer says he doesn’t want to play from the bottom again if the girls are a united front. It’s time for the #RewardChallenge. Jeff greets them and explains it. They are attached to a rope, have to untangle it, make a bridge, cross it and use sandbags to knock over blocks.

The winner goes back to the temples where they started 33 days ago. They get food and a night spent in the temples. Jeff says it’s once in a lifetime. They ran this first back in season 29 and Keith won it. They start. It’s harder on Jeremy since he’s a bigger guy.

Spencer takes off hoping he has enough rope. Keith also heads out. Wentworth comes out for a try. Spencer starts putting together his bridge. Keith and Spencer are neck and neck then Jeremy and Tasha. Abi is moving slowly. Do the others have enough rope?

Keith has his stack down but has to knock them off the table. Tasha starts throwing hers. Jeremy starts throwing. Keith has two blocks left on the table. Jeremy runs to get more sandbags and runs out of rope. Keith wins it with one more throw.

Jeff tells Keith to choose one person to go along. He chooses Wentworth and she thanks him. He says she brought his wife to him. Then Jeff says one more and Keith chooses Spencer. He asks Keith why Spencer and he says no real logic and says Spencer didn’t get to spend time with his loved one.

He forgets Tasha’s name for a moment and she’s annoyed. Jeff asks if Tasha is annoyed. She says she takes advantage of every opportunity and says being back at camp can be just as advantageous. She’s upset he remembered her name.

She wonders if he’s playing a role or is really that slow. Keith, Spencer and Wentworth head out for their reward. Back at camp, they talk about how strong Keith is at challenges and they call him the new golden boy. Tasha proposes sending him home and Kimmi says yes.

Abi says she’s a villain and villains have more fun. Jeremy balks on sending Keith home and Tasha says she thinks Jeremy is think there’s an all-girls alliance. He’s already regretting sending Joe out instead of Abi. He says he doesn’t care about the reward and is happy to be in camp.

Kimmi says they need to send Keith out and Tasha wants Jeremy to let go and vote with her – or she’ll move on to someone else. At the temple, Spencer says this is the best reward of all. Monks greet them and give them a blessing.

Keith says he wouldn’t imagine being at a temple in Cambodia and is just as likely to be on a shuttle to Mars. He says he doesn’t know how you would trump this. Some women dance for them. Wentworth watches and says she’ll never have this again.

She’s thrilled to be on this one. She says she’s been on the bottom a lot and is so happy to be there. Then they sit down to eat pasta, wine and other Italian treats. Wentworth says she thinks Abi will be okay and will still vote with them.

Spencer says this would be a good final three and Keith says they should make it happen. Spencer suggests going after Tasha and keep Abi to use as a number. Wentworth says she’s fine with going after Tasha. Spencer is worried Abi can be rational.

On day 33, they’re making rice back at camp and Tasha asks if she can talk to Jeremy alone. Abi says it’s okay. Abi says it would be better to include her but if she doesn’t want her, that’s fine. Abi tells them to go talk. Jeremy asks if she’s a Scorpio because she’s crazy.

Abi leaves and Jeremy says he can’t even imagine dating her and thinks she’s crazy. Later, Tasha tells Jeremy they should go at Abi. He asks what about Keith being good at challenges. Tasha says they don’t need messiness since she’s volatile.

Tasha says they need trust and they can’t trust Abi. Later, Jeremy says he likes it because it’s one less girl. Tasha says they should talk to Spencer. Jeremy worries Spencer might tell Wentworth and Keith the plan and blow it up.

It’s now time for the #ImmunityChallenge and Jeff takes the necklace back from Keith. They have to run across water obstacles, retrieve a key, unlock puzzle pieces and do it again. Jeff says this was a puzzle choice in Season 30 that wasn’t taken.

They start and Jeremy and Spencer take an early lead. Keith and Wentworth are in third and fourth. Spencer falls and has to go back. Spencer jumps in for his key. Spencer is back and still ahead. Keith takes a tumble. Keith is in the water headed for the key.

Jeremy is swimming back with his key followed by Spencer. Keith and Wentworth are close behind. Spencer takes off ahead of Jeremy on the way back across the obstacles. Kimmi and Abi are in last and Tasha is stuck trying to get the key.

Spencer takes a hard fall and smacks his face then has to go back one and Jeremy pulls ahead. The puzzle just has five pieces. Tasha is still stuck on the key. Jeremy and Spencer are back and Keith is close behind. Jeremy unlocks his pieces and Spencer does too.

They are both on the puzzle. Spencer solves it and wins individual immunity. He did the puzzle in less than 15 seconds. Tasha is still in the water and starts to struggle. Jeff calls for safety people as she screams for help. Medical runs over.

They get her onto the platform and she says she took in a lot of water. She struggles to breathe and the medic checks on her. She says she just ran out of energy and swallowed a lot. Kimmi and Abi hold hands and worry. Jeff comes over to her.

The medic says she’s just exhausted and she panicked when she swallowed water. He says her oxygen levels are fine and she’s not in any danger. Jeff says they can take her in when she’s ready and she says she is and gets up. The others wait on the beach.

Kimmi says she scared her and gives her a hug. Wentworth says they’re all just exhausted and it catches up to you. Jeff talks to her and she says it’s frustrating and she didn’t have anything left. He tells Tasha to stay seated and he calls Spencer over.

Spencer goes to get his immunity necklace and Jeff says when they tested that puzzle no one ever did it that fast. Jeff says the group clearly has camaraderie the way they are caring for Tasha but says they have to vote someone else.

Keith says Tasha almost drowned and says he’s still targeting her. Tasha says the ocean is out of her comfort zone since she’s from the Mid-West. She goes to walk down the beach. She’s nervous about tonight’s vote and thinks they may come for her.

Tasha suggests they go after Abi tonight. He says he wants to play with them and asks if they talked to Kimmi. She says they did. Now Spencer has to decide what to do. They head to #TribalCouncil then the jury comes in – Kass, Savage, Wigglesworth, Ciera, Fishbach and Joe who is all smiles.

Tasha says she felt like she was drowning today and Spencer says any event is the opportunity for change. Kimmi says idol talk always comes into play when they talk about numbers for voting. Jeff asks about the use of the word “we” and Jeremy says there are several groups.

Tasha says people are trying to keep their options open but that means they could be missing out. Jeff asks which of them are confident. Keith says he does. Keith says let’s do it – let’s vote. Spencer says he admires his confidence since he’s unsure. Jeremy waffles a bit.

Abi says she wonders which “we” she should go with and says she can change her mind. Kimmi votes for Abi. Keith votes for Tasha. Jeff goes to count the votes then comes back and calls for any idols. The vote are: Abi, Tasha, Abi, Tasha, Abi, Keith, Abi.

They sent Abi home. Abi wishes them luck and leaves. Jeremy smiles. Tasha looks smug. Keith did not get his way after all despite his confidence. She tells them well played and goes. Later, Abi says she thought she was safe tonight and they blindsided her. She says it was a great experience.