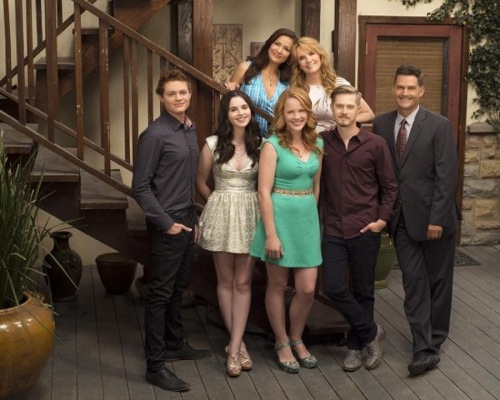 Switched At Birth returns to ABC Family tonight with an all new Tuesday January 20, season 4 episode 3 called “I Lock The Door Upon Myself” and we have your weekly recap below. On tonight’s episode, Bay [Vanessa Marano] gets an interview for a long-awaited submission with the Kansas City Artist Showcase to have her art be part of a public display but realizes her current status may prevent her from qualifying.

On the last episode Daphne struggled with the speed and depth of her coursework, which was made more difficult when her interpreter, Josh, picked and chose what he would interpret for her. Bay tried to balance her long-distance relationship with Emmett and fulfilling her sentence, all while dealing with an aggressive person on her team. Meanwhile, Kathryn had a meeting with a movie producer about her book. Did you watch last week’s episode? If you missed it we have a full and detailed recap right here for you.

On tonight’s episode as per the ABC Family synopsis, “Bay gets an interview for a long-awaited submission with the Kansas City Artist Showcase to have her art be part of a public display but realizes her current status may prevent her from qualifying. When a dorm resident continues to prank the deaf students, Daphne challenges him to a dorm triathlon. Regina finds herself drawn to an East Riverside coffee house and its owner. A birthday milestone gets John thinking about the next chapter in his life.”

Tune in to ABC Family at 8PM EST to watch “I Lock The Door Upon Myself” and we’ll also be recapping it all live for you right here. In the meantime head to our comments section and tell us your thoughts on season four so far and enjoy a sneak peek of tonight’s episode below.

With Bay stuck back home, Emmett has been a little lonely. So he thought why not befriend this girl name Skye. She’s in one of his film classes and she seemed friendly. Some would even say overly friendly as she later got Emmett assigned as a grip on a real life set.

So, currently, Emmett’s life is starting to look up meanwhile the great love of his life has just gotten yet another setback. Bay was picked as a finalist in an art show that was also going to be showcasing some celebrities – and she recently realized how her career record was going to look during her interview for the final round.

People tend not to want to voluntarily work with criminals. And somehow, with that as their excuse, Toby ended up convincing her told her that she should just hide her ankle bracelet. He went out and bought her a long skirt and all she had to do was play it cool.

Which she did. She charmed the interviewer and her artwork was very out there. But she and Toby basically lied throughout the entire thing. She told the interviewer that she had gotten involved with a charity and was part of an environmental cleanup group. When the truth is she has to clean up garbage off the side of the road as part of her probation.

As for Daphne, her dorm room (the one specifically assigned to the deaf program) has had to deal with some nasty pranks. Their doorknobs were covered in Vaseline and someone threw a stink bomb down one of their toilets. So Daphne found out who was behind it and she threatened him with a photo of him going into their bathrooms.

However, that wasn’t going to be enough for the dean and that young man knew it. So he challenged Daphne and her friends to a competition between the dorms. Whoever won would get to use the good bathroom while the losers had to trek over to the sports complex.

And then in the first game he cheated. The jerk got guys from sports teams that didn’t even live in his dorm to play for his side. So in the next game, Daphne returning the favor by playing with these new rules for anything goes. They were challenged to a game of handball and so she brought along her father – the major league player.

John joined the game to help his daughter but something happened while the team was playing. He saw how much potential Travis had as a pitcher. So that’s what he wants do now. A mid–life crisis almost made him go back to school but then he saw Travis play and he wants to help the young man get into the major league.

Though, the important part, as in Daphne’s team – they went on to win the second game of the triathlon but she found out she had hurt someone in the process of trying to win when she returned to her dorm rom. And that was her roommate. The poor girl who isn’t deaf yet lives with people that treat her like an outsider.

No one has befriended Iris or even included her in any of the events. So she felt alone and eventually once Daphne realized she was unintentionally hurting someone – she got her act together. And she apologized to Iris foe ignoring her.

As for Iris, she actually was handy during the final leg of the triathlon.

But, back at the house, Bay’s luck with the interviewer ran out at the same time her battery started to die out. The damn thing began beeping so loudly that Bay was forced to explain herself.

So, in the end, she lost her showcase. And she finally told Toby what’s been going on with her. It seems she wants to be angry at someone so she’s chosen to be mad at Daphne. But everytime she realizes how unfair that is – she feels guilty. Hence, she hasn’t liked being around Daphne lately.

And, well, Toby told her she had to get over it. Daphne is living a life Bay allowed her to live. So they visited Daphne after they got a new charger for Bay’s monitor and the girls were able to work it out. It seems they just needed to have playing with mud.

A mud race was the last part of the Dorm Games and after Iris won it for her dorm – I don’t think people are going to be as quick to shun her as they did before.

Yet Emmett did something he’s going to have to explain to Bay. He and Skye kissed and though she kissed him – Bay is not going to want a reminder of what happened the last time Emmett was tempted!