Switched at Birth Recap – There Is My Heart: Season 4 Episode 10 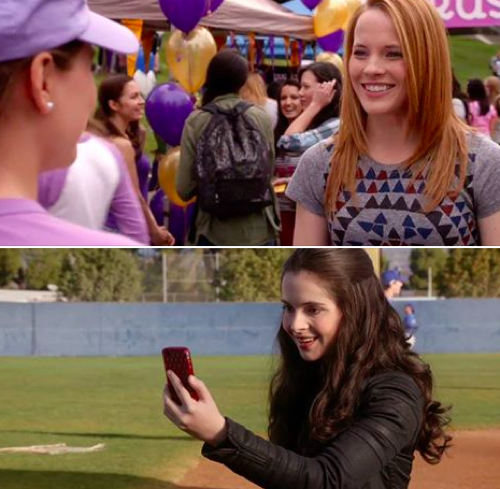 Switched At Birth returns to ABC Family tonight with an all new Tuesday March 10, season 4 episode 10 called “There Is My Heart,” and we have your weekly recap below. On tonight’s episode, Bay [Vanessa Marano] heads to Los Angeles to surprise Emmett [Sean Berdy], who’s working on a huge class project.

On the last episode Iris suggested that Daphne join a sorority in order to experience more of college life. Meanwhile, Bay tried to mend Travis and Mary Beth’s relationship, which had been hurt by his newfound popularity; and Toby wanted Lily to move in with him. Did you watch last week’s episode? If you missed it, we have a full and detailed recap right here for you.

On tonight’s episode as per the ABC Family synopsis, “intent on making their relationship work, Bay surprises Emmett with a visit to Los Angeles while he’s shooting his first big class project. Daphne is distraught with her performance in school and the idea of letting Bay and her family down. Kathryn and Toby get the chance to have their musical produced.”

Tune in to ABC Family at 8PM EST to watch “There is My Heart” we’ll also be recapping it all live for you right here. In the meantime head to our comments section and tell us your thoughts on season four so far and enjoy a sneak peek of tonight’s episode below.

Bay surprised her boyfriend Emmett by coming out to LA when he least expected it on tonight’ all new episode of “Switched at Birth”. Yet, while she was happy to finally see him face to face especially after so long, Emmett on the other hand was apprehensive about her timing. Apparently, he’s shooting his student film during her stay and subject of the film is their relationship. So if Bay sees the “Tank” scene in which their characters go their separate ways afterwards – she might think his student film isn’t as “loosely” based as he implied.

Hence Emmett wants to keep her away from the set as much as possible. Bay has already told him that she wants to stick to their original plan of moving out there to be with him and he doesn’t want to hurt her.

Bay, though, doesn’t understand why Emmett doesn’t want to share what’s essentially his dream with her. So she’s trying desperately to win him back without even knowing the real reason it feels like he’s pulling away. And because she left in the dark, she thinks if she keeps pretending everything will or work out then that’s what’s going to happen.

Meanwhile, Daphne has gotten her final chemistry grade and it looks like med school might get put on hold. According to Daphne, setting a “D” in chemistry is not exactly what the really great schools are going to be looking for in potential students. And if Daphne doesn’t get into med school, she’s worried that Bay’s sacrifice would have been for nothing.

Remember it was Bay that took the rap and the probation for Daphne. Thus it was Daphne’s “fault” that Bay had to stay homebound and was unable to follow Emmett to LA months ago like she wanted. So getting that “D” is really hard on Daphne. It’s honestly making her feel like she let everyone down.

And at first Daphne didn’t even know how she was going to get over her slow score. Her friends were all heading out to get pizza before they went the bonfire on campus. And Daphne couldn’t go with them because she had a family thing with Toby and Kathryn. It seems that after weeks of creating their original score, the mother and son were finally ready to showcase their musical to potential investors. So they wanted their family around to support them.

But, sadly, Daphne never made it the showcase to watch her mother and brother in action. There was a really bad accident at the pizzeria and someone reported a couple of deaf kids getting hit by a drunk driver.

As for the showcase, though, it didn’t go to plan. First, Toby needed convincing to work with his mother for it seems his girlfriend had admitted to talking to Kathryn about her mixed feelings on their relationship. And then the producer they were waiting on decided to skip the show entirely. She said a musical about baseball didn’t sound all that appealing.

In the end, however, Kathryn and Toby got over their personal issues long enough to cheer each other up about their missed chance on the musical.

Yet, Bay and Emmett’s relationship wasn’t healed as quickly. Because after Bay had found out he used what happened with Tank for his movie – she felt betrayed. And more importantly she was angry. If Emmett needed a way to get pass the issue then he could have talked to her instead of shutting her out. But regardless of her feelings on the matter, Bay still wasn’t the one that called it quits.

Emmett actually did that!

He told Bay that they had been growing apart for months now. And that he was the only one big enough to say what they were both feeling. Then he said she shouldn’t move out to LA and have her whole life depended on him. At least not when he needed to focus on school and starting up a career.

But Bay didn’t want to part on good terms. So she told him that if this was it then it was going to be for forever. And Emmett let her go!

Fortunately for Daphne, she later figured out how to move on as well. Her friends getting hurt and there being no interpreter on staff at the hospital made her see that there should be future doctors like herself. So she’s going to take that chemistry class again. And in the meantime she was going to help Bay get through losing Emmett.

And Regina, who thought she was going to finally have a relationship with Eric, found out his ex is still alive.