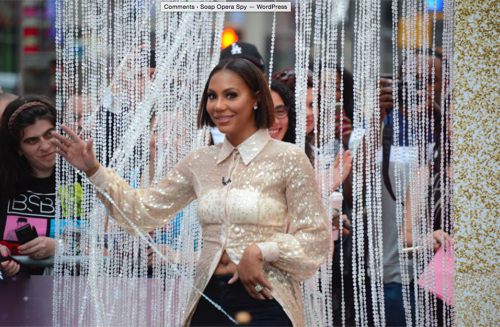 Tonight on ABC Dancing With The Stars returns for a seventh week and Tamar Braxton and her professional dancing partner Valentin Chmerkovskiy danced an Foxtrot routine to “People Are Strange” from The Doors. On tonight’s episode the eight remaining couples will perform an individual Halloween-themed routine in addition to a competitive team dance.

Judges’ comments on Tamar’s Week 7 Foxtrot:  Julianne: “Believing in yourself and having that confidence can totally get you to the next step to the point that you think you actually may win. With that being said, there was a little mistake in the beginning, there was a disconnect.” Bruno: “I know the way you are driven, I love it but you did miss a few things, it was off a few times because you were almost over driven.” Carrie Ann: “I think you were actually out of sync, I agree with Julianne and Bruno but Tamar is the most natural mover. Our goal is to judge, we would like to see growth and I thought there was growth in hold. But, it was push and pull because there were mistakes.”

Watch the video below and let us know what you think, do you agree with the judges comments? Do you think Tamar did enough to avoid elimination tomorrow? Sound out in the comments and let us know your thoughts?