Tamar Braxton Furious Over Dancing With The Stars Editing: Rants On Social Media About DWTS – Val Chmerkovskiy Backs Her Up 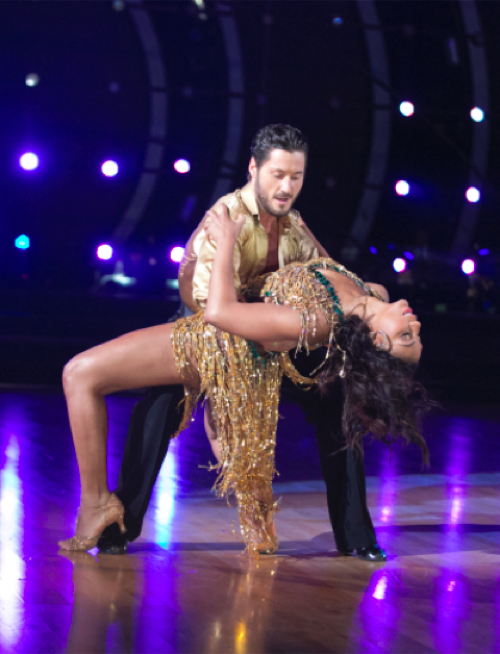 Did Dancing With The Stars contestant Tamar Braxton just blow her chances of winning Season 21 of the ABC dance competition? The producers of DWTS have to do some creative editing, just like every other reality show, to create some sort of plot twists or competitions between the teams. The dancing is great and all – but without some banter or dialogue it could get old fast.

During the last episode of Dancing With The Stars, a clip was shown of Tamar Braxton boasting about her and Val Chmerkovskiy’s performance. In the footage Tamar bragged that she is “probably the best dancer in the competition.” (See Video Below) Of course, DWTS fans weren’t impressed with her less than humble statements – and they blasted her on social media for being rude and cocky.

Tamar Braxton is furious with the producers of the show, and she fought back on social media and let it be known that her statements were edited and taken out of context. Tamar tweeted, “I’m never going to let anyone make me out to be someone I am not. I don’t have time for it, and I won’t Stan for it.” Then Tamar added, “The Bible says speak things as though it is so and so I shall. Who kicks one who wants to believe in themselves.”

Tamar’s partner Val Chmerkovskiy even jumped to Tamar’s defense on Instagram and he posted this message to Dancing With The Stars fans, “Everybody is asked to say something in a friendly way but, like I said, all that banter out of context is going to look extremely rude and a bit vain. And given Tamar’s nature in general, it can really come off as negative. That’s what she’s upset about.”

We honestly believe that Tamar’s comments were probably edited to make them sound harsher than they were. But, at the end of the day – half of the competition is based on America’s votes. So, could Tamar feuding on social media with fans over the editing and her statements have hurt her chances of winning Season 21? Come back to CDL for all your DWTS news, spoilers and dances! Share your thoughts in the comments below!

Dancing with the Stars airs next on ABC, Monday November 2, 2015.  Make sure to come back to Celeb Dirty Laundry, RIGHT HERE, for all our DWTS coverage.