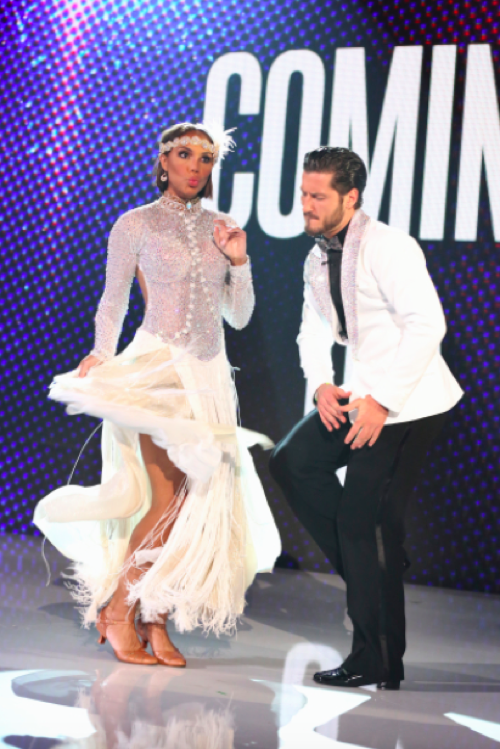 Dancing With The Stars 2015 news is that Tamar Braxton is in the emergency room with pneumonia, and the odds of her being on stage with her partner Val Chmerkovskiy for the November 9th live episode are slim to none.

TMZ reported at 7:20 PM EST that Tamar’s husband had just rushed her to the hospital – and seeing as how the show kicks off at 8:00, the odds of her being back in time are slim to none. And, that means that she will be disqualified – just like Real Housewife Kim Zolciak was at the beginning of Season 21. The rules are very strict – you don’t dance…you are done (regardless of how legit your excuse is).

TMZ is reporting, “Tamar Braxton is in the ER right now, and it’s doubtful she’ll make the live show for “Dancing with the Stars,” which means she could be disqualified.

We’re told Braxton has pneumonia — something she’s been battling for two weeks, and while rehearsing her dances for Monday night’s show she became extremely sick. Sources tell us that Braxton’s husband rushed her to the hospital.”

Going in to tonight’s episode, there are six teams remaining in the competition – and someone was going to be eliminated. If Tamar doesn’t return to the Dancing With The Stars set – then she will be the celeb that is cut form the competition tonight. Ironically, there was a good chance that she may be voted off from DWTS anyways.

Tamar hasn’t been America’s favorite dancer since she smugly announced during rehearsal that she was the “best dancer in the competition.”

What do you think DWTS fans? Is Tamar Braxton out? How serious is her pneumonia? Do you think that she would have been voted off if she anyways, if she didn’t go to the hospital? Let us know what you think in the comments below and return to CDL for all your DWTS news, recaps and dances!