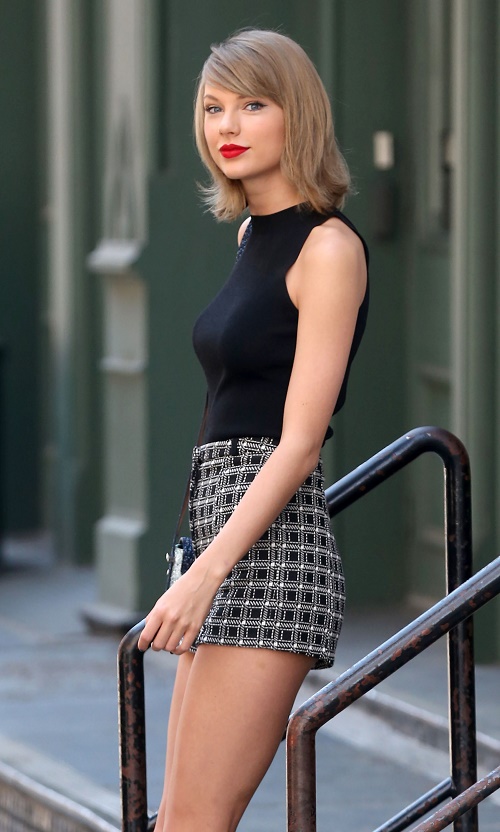 Taylor Swift is a virgin! Apparently, the world renowned singer and 25-year-old pop icon hasn’t actually done the deed with any of the guys on her lengthy list of failed relationships. Taylor Swift has reportedly been “saving herself” for the right guy – and she thinks her new boyfriend DJ Calvin Harris is finally the right guy. Yeah, we’re kind of shocked too that Harry Styles wasn’t the “right guy,” but hey, to each their own.

According to a new report in the June 8 edition of OK! Magazine, Taylor Swift vowed a long time ago not to have sex until she was in a serious and committed relationship with a guy that she could trust. Wow, it sounds like someone didn’t sleep through middle school sex education class – Taylor’s high-school should be proud that at least one of their students took their abstinence lectures to heart. A source close to Swift dished to OK! Magazine, “She has been linked to so many famous and eligible bachelors. But, at the end of the day she just wants to be wined and dined – and she is not going to just “lie down” with anyone.”

Taylor Swift’s roster is impressive – the singer has dated some of the hottest guys in Hollywood including Jake Gyllenhaal, John Mayer, and One Direction’s Harry Styles. But, apparently, Taylor never took it to the next level with any of those guys and her V-card is still intact. It won’t be for much longer though. Sources tell OK! Magazine that Taylor has decided Calvin Harris is “the one” and she plans to lose her virginity to him. The insider explained, “Taylor needs an emotional connection more than anything – she wants to wait for the perfect guy, someone she trusts completely and feels comfortable having sex with.” Apparently, Calvin Harris meets all of those criteria.

So, are you shocked that Taylor Swift is still a virgin? Or is this all some sort of publicity gimmick? If she is a virgin, then is losing her virginity to Calvin Harris really a good idea? After all, he has quite a reputation as a player. Let us know what you think in the comments below! What do you think about Taylor Swift dating Calvin Harris in the first place?