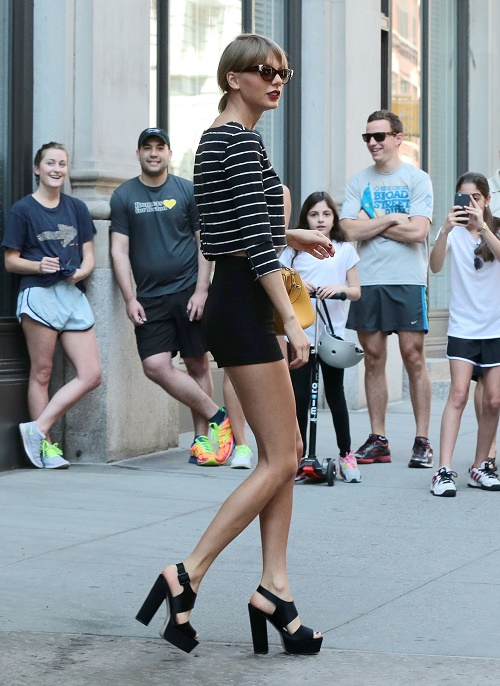 Are Taylor Swift and Calvin Harris getting married? Rumor has it that Taylor is already planning her wedding to the DJ after dating Harris for just 4 months, but she won’t say “I Do” until he signs an iron-clad prenup that she had drawn up. Taylor Swift has developed quite a reputation of rushing into relationships over the years – so frankly nothing would surprise us more if she truly is planning a wedding to the man she has been with for a whopping 4 months.

According to a new report from In Touch Magazine, Taylor Swift has qualms about marrying Calvin Harris – despite all of the reports of him being a player, and his numerous cheating scandals. But the “Bad Blood” singer isn’t rushing into the marriage like a complete fool, at least she has a prenuptial agreement! An insider dished to In Touch Magazine, “A lot of Taylor’s closest friends are engaged, and she is going to be a maid of honor in a friend’s ceremony this summer, so weddings are on her mind nonstop. She is completely prepared to take it to the next level.”

Even though Calvin Harris hasn’t proposed to Taylor Swift yet, and he might never, the singer is already anticipating the day that he does and has made plans for a prenup. In Touch’s insiders reveal that Taylor “is no dummy” and is “very business savvy” when it comes to her money, she may not protect her heart well – but she sure as hell is protecting her bank accounts. Ironically, Calvin Harris is already benefiting monetarily from dating Taylor Swift – so he doesn’t even need to worry about divorce settlements or prenups. Since Calvin and Taylor confirmed their relationship, his clout and overall fan base has basically doubled, business is booming for the music producer and DJ since he stepped out on Taylor Swift’s arm.

Do you think that Taylor Swift and Calvin Harris will get married? Will he sign the prenup? Could he just be using Taylor to line his own pockets, or does he truly care about her? Let us know what you think in the comments below!