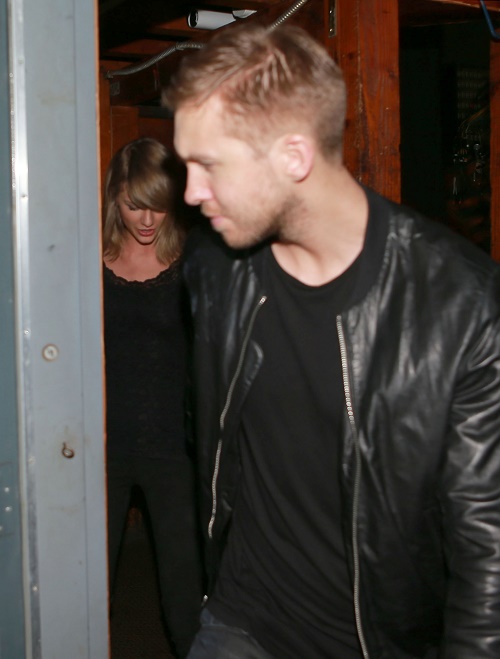 Taylor Swift and DJ Calvin Harris are officially dating, and Taylor is smitten with her new boyfriend – but her friends aren’t. Taylor clearly isn’t the best judge of guys, considering her disastrous relationship track record, so it makes sense that her close friend are skeptical of the new man in her life. According to a new report, Taylor’s friends are certain that Calvin is just going to break her heart – but on the up side, it’ll make for a great new song.

The April 13th edition of Star Magazine reveals, “Taylor Swift may want to hink twice before trusting Calvin Harris! The pop star seemed smitten as she took in a Kenny Chesney concert in Nashville with the sexy Scottish DJ on March 26th. Calvin had her arms around her and she would lay her head on his chest, dished an eye witness. But Taylor’s inner circle thinks that she is flirting with danger.”

Taylor Swift definitely has a type when it comes to guys – and she has always been attracted to bad boys or players, or both in Calvin Harris’s case. A Hollywood insider dished to Star Magazine that Calvin has a bad reputation with the ladies, and his and Taylor’s relationship is just a disaster waiting to happen. The snitch explained, “Calvin may appear to be a wholesome guy, but he is a huge player. He jumps from girl to girl, women throw themselves at Calvin and he loves it. If Taylor is looking for a casual Friday night hook-up, then Calvin is the right guy. But if she wants a real relationship with substance and trust, then she definitely has the wrong guy.”

We don’t really think Taylor is the hook-up kind of girl. If she is openly going out on dates with Calvin, then she definitely thinks that they are in a relationship. The obvious question is, does Calvin think it is a relationship or is Taylor just another notch on his belt? Is Taylor just going to get her heart broke…again? Let us know what you think in the comments below!