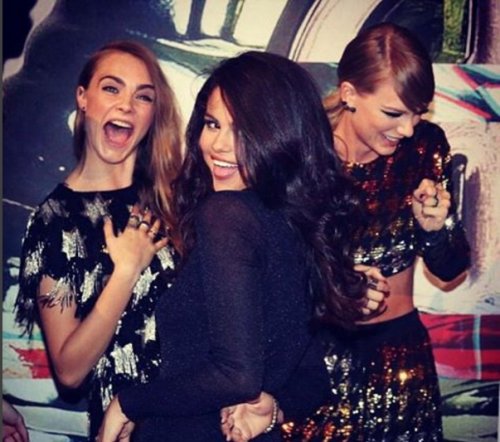 Taylor Swift is flying Selena Gomez, Calvin Harris and Karlie Kloss to Australia for a visit while she tours down under – but there is a motive behind TSwift’s friend trip and that is to get her BFF away from Justin Bieber.

Taylor cannot believe that Selena fell for the “Sorry” singer’s public apology. Swift is frantic to get face to face with Gomez and try to talk some sense into her friend before Bieber hurts her again.

Taylor has been the strongest force keeping Selena and Justin apart lately. The “Blank Space” singer has given Gomez a million reasons to move on from Bieber but SelGo just can’t seem to shake off bad boy Justin.

Now Taylor feels like she needs to get some distance between Selena and Justin so Taylor can try to prevent another heartbreak for the “Same Old Love” singer. Of course, the trip also happens to coincide with Taylor Swift’s birthday.

TSwift’s December 13 birthday worked out perfectly for the “Shake It Off” singer and her perfect little plan. How can Selena Gomez say no to her best friend on her birthday? SelGo had to hop a flight to Australia to help Taylor celebrate.

The duo will be partying with a host of other famous faces too. Swift has planned a huge party to celebrate turning 26 and some high-profile celebrities will be there for the fun.

In addition to Swift’s girl squad, the “Bad Blood” singer is also reportedly expecting Oprah Winfrey, Ed Sheeran and probably a whole bunch of other impressive names who just haven’t RSVP’d yet.

Taylor is known for flaunting her celebrity friendships on stage and there isn’t a shortage of household names who are waiting for their turn to be Taylor’s friend. The excitement for the Australia trip and Taylor Swift’s birthday is starting to pick up.

The plan is for Selena Gomez to have so much fun on the other side of the planet from Justin Bieber that Taylor can convince her friend to stay away from that toxic relationship.

Taylor knows it will never end will for Justin and Selena and she doesn’t ever want to see her friend get hurt by Justin Bieber again.