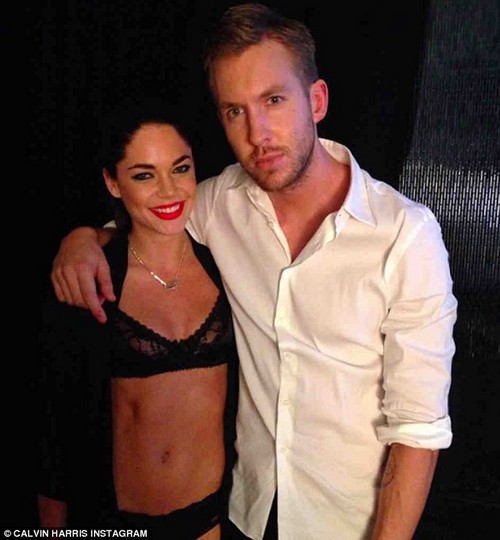 Is Taylor Swift’s new boyfriend Calvin Harris already cheating on her? When Taylor first began dating Calvin Harris we all knew it was only a matter of time before the prolific player was engrossed in some sort of cheating scandal. Multiple pals of Taylor’s feared that the hunky DJ wouldn’t be able to stay loyal for long – and it looks like he has already betrayed the pop singer, and coldheartedly did so in the midst of her mother’s cancer diagnosis.

According to New York Daily News, not only did Calvin Harris cheat on Taylor Swift – but he already had a girlfriend named Aarika Wolf when he began dating Taylor – Aarika and Calvin have reportedly broken up since then. (Probably because she found out he was two-timing her with T-Swift). So, if you want to get technical, then Taylor Swift is actually the “other woman.” We’re going to go out on a limb here and assume that Taylor had no idea her new boyfriend already had a girlfriend. Considering all of the men in her life that have played her, it would be super hypocritical of her to begin dating someone else’s boyfriend.

The Daily News’s inside source goes on to say that Calvin Harris is just using Taylor Swift to boost his career – and he really isn’t even that into her. The insider dished, ““It’s awkward because Calvin’s friends are very much the late-night club and DJ crowd; Taylor doesn’t seem to fit in. Calvin’s friends think he’s doing it because it’s good for his profile — and he kind of thinks it’s funny.”

Sadly, Taylor Swift’s mother, Andrea Finlay, was just diagnosed with a deadly cancer and the singer has been reportedly leaning on her boyfriend Calvin Harris for support. The last thing Taylor needs to worry about on top of her mother’s health is her boyfriend cheating on her. On the bright side, we can already see an entire album dedicated to Calvin Harris in the works. What do you think of Calvin cheating on/with Taylor Swift with Aarika Wolf? Is he just going to break her heart, or do you think the couple will last? Let us know what you think in the comments below!