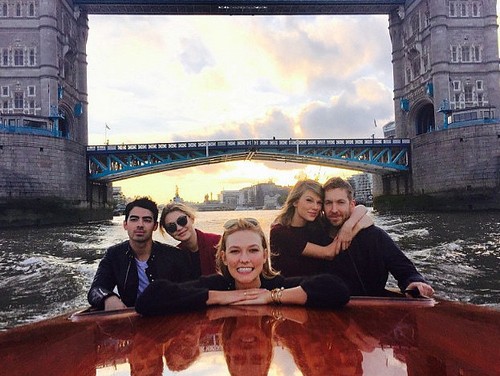 Taylor Swift had a jolly good time with boyfriend Calvin Harris in London over the weekend. Swift, who was the headlining act at the British Summertime festival in Hyde Park, London, spent her free time doing all sorts of fun, romantic activities with Calvin and company. The highest earning couple in the music industry – bye-bye Beyonce and Jay-Z – enjoyed a dreamy sunset boat ride on the river Thames. All was well in the land of love and money – until someone pressed the Awkward Button and added Swift’s ex-boyfriend Joe Jonas and Gigi Hadid to the bizarre mix.

Gigi Hadid (Jonas’ current girlfriend) and supermodel Karlie Kloss were also in the weird boat – two is a party, three is a crowd, four is a score and five is a trip down the river Styx. Swift shared a snapshot of the double-date adventure via Instagram on Sunday. According to Us Weekly, “The tactile couple [Swift and Harris], who wrapped their arms around each other in the adorable photograph, looked to be double dating with rumored new couple Hadid and Jonas, who sat close to each other in the photo. Pal Karlie Kloss also joined the love boat, but judging by her huge grin, she wasn’t feeling too put out about being third (or should that be fifth?) wheel to her high profile pals.”

I expected to see a dead ghost lady in the background, because London and ghosts go together like Gary Busey and Donald Trump’s hairpiece. Unfortunately, this is real-life, not Renier-life. Ghost ladies don’t hang out with Taylor Swift and her friends. In fact, no one hangs out with her because Taylor, the darling man-eater that she is, scared away 99% of Hollywood’s male population. According to those in the know, Swift and Jonas, who dated in 2008, are the very best of friends. They even dined together at a restaurant in Los Angeles earlier this month.

Calvin, please for the love of Godiva do not break Taylor Swift’s heart. We can’t handle another one of Swift’s break-up-horror-hate albums!

What do you think? Is Taylor Swift using Calvin Harris as lyric fodder? Let us know your thoughts in the comments below.