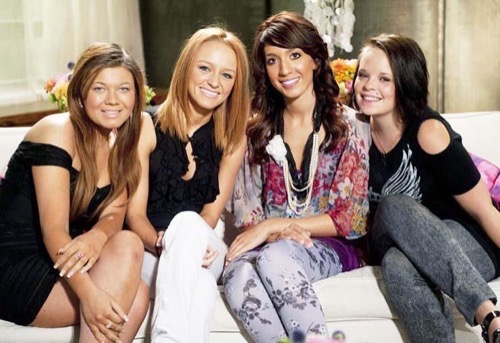 Tonight on MTV their series Teen Mom continues with an all new Monday March 30, season 5 episode 2 called “Back to School” and we have your weekly recap below. On tonight’s episode, Cate and Tyler plan a party to go public with their baby’s gender.

On the last episode, Cate and Tyler learned they were pregnant, spurring Cate to seek marriage; Maci struggled to co-parent. Did you watch the last episode? If you missed it, we have a full and detailed recap right here for you.

On tonight’s episode as per the MTV synopsis, “Cate and Tyler plan a party to go public with their baby’s gender; Maci has a hard time believing Bentley is starting kindergarten; Gary asks Amber to help out with Leah’s first day of kindergarten.”

#TeenMomOG starts at Amber’s who is talking about Leah’s first day of school. She calls Gary and he asks if she wants to go school supply shopping. Amber tells Heather the producer this will be strange. He calls Kristina and says he doesn’t want her to feel shut out. She says her daughter goes to the same school as Leah so they can’t avoid an encounter. He ends the call. Amber does her make up then they pick her up. Gary tickles her and tells Leah to tickle her too.

She says she wants to go and he tells her Kristina will be there and says just not to say anything to her. Leah invites Amber to spend the night at her house but Amber says she can’t spend the night at his house. They shop together for school supplies and then she comments that people are looking at them. He says of course because it’s Gary from Teen Mom.

Catelynn says she and Tyler aren’t on the same page about the wedding. They are headed to get an ultrasound and find out the sec of their baby. Tyler says he wants a boy so bad. They ask her not to tell them but to write it on a slip of paper. Tyler keeps insisting it’s a boy. They give them all the photos but the one showing the sex is in an envelope. They head out with the secret envelope. Maci tries to get in touch with Ryan for coming to Bentley’s first day of school.

Ryan tries to force Bentley to play ball but his grandpa says he can just be a boy. He asks if he’s going to the first day of school but Ryan says he has work. Ryan gets hypercritical of the way Bentley plays ball and his dad tells him to lay off. Maci gets a call from Jen, Ryan’s mom, and she asks if she’s bringing Bentley over. She says Ryan is missing Bentley’s first day of school. Maci says she would miss work to be there. She says Ryan doesn’t give a shit. Taylor says she should relax and have a beer then suggests therapy.

Krystal comes to see Amber who is confused by Gary’s flirting. She says she had a good time shopping with them and Krystal says it’s weird. She asks if Gary doesn’t want to be with Kristina anymore and she says she doesn’t know what’s going on. Gary is out to eat with his brother Robert and says Leah said she wants him and Amber back together and says Kristina can be their neighbor. He tells him he and Amber went shopping for Leah. He says he cares about Amber.

Robert tells him to pull out some old Teen Mom episodes and watch her beat on him if he’s thinking about him. Robert says if he’s going to tickle Amber, he needs to break up with Kristina. He says Amber is interested and says if he wouldn’t do it to a random old man in a parking lot, he shouldn’t do it to Amber. Ryan meets his parents and Bentley for a meal. Ryan says he won’t like school. Jen asks if he’s seen Maci and he says no and says he hasn’t talked to her. She asks why not.

Bentley whispers to his grandpa and says his mama’s house is his real home. Ryan says that’s fine and walks away saying he has to go to work. He pats Bentley and runs off. Larry tells Adrian the producer that he hopes they got that on camera and calls the way his son is acting bullcrap. Tyler asks Catelynn how much weight she gained in her last pregnancy. He says she’s overdoing the food and she gets annoyed with him and says love her or not.

She says she can’t enjoy her pregnancy if he’s going to be like this. April comes in with Nick and asks about the doctor. She asks her to babysit Nick and Catelynn says it’s fine. Nick has been raised by Butch (Tyler’s and) and her mom when they were married and she says he’s still in jail for assaulting her mom and then she divorced him while they were in jail. Tyler gets some mail from his dad including a card for Nick from Butch.

It’s a nice card that says Butch misses Nick and hopes he has a good birthday. He says he thinks of him as a son like Tyler. Nick says he almost cried reading it and Tyler says it’s okay then says his dad missed about 20 of his birthdays. Nick says he hopes the baby is a girl. Kristina says she has to leave while MTV is shooting since her ex doesn’t want their daughter on the show. He says he gets it. He says Amber will behave at the school.

He tells her not to be scared and says Amber doesn’t want to go back to prison. With Kristina gone, Amber comes to help Leah get ready for school. She gets her dressed and fixes her hair then they roll out for school. Amber tells her she looks cute and Leah asks if they’re almost there and then says she sees Kristina. She walks right in front of them and Gary waves. Leah says she has to meet Kristina and says it’s her job to come into school. Amber refuses to come inside and just kisses her goodbye.

Gary hugs Kristina and Amber sees it. Back in the car, Gary says Leah went to class like a champ. Amber is upset and Gary tries to get her to talk. Amber says her day is ruined. He drops her off at her car. Heather comes to check on her and Amber says to get the camera out of her face. Amber doesn’t want to talk and drives away.

Jen brings Bentley home and says she can’t stay. She tells him good luck at school tomorrow. Jen tells Maci she wishes Ryan wasn’t missing out on the first day of school. Maci says MTV isn’t filming at school. Jen says Bentley would freak and she says people already recognize him from the show. Maci tells Bentley she can’t believe he’s going to school tomorrow. She says he has to be good and get good grades.

Heather goes to talk to Amber who says she just has to stay away from Gary. Amber says thinking about having her family was what got her through prison. She tells Krystal that he has clearly made a whole family without her. She says Kristina is too big a part of Leah’s life now and there’s no turning back from that. Krystal says she’s a good man. Krystal sends her son to smooch on Amber and make her feel better.

Catelynn says Butch has been in contact and it’s bringing back memories for Tyler. Butch calls collect and Cate says she loves him. He says Nick got the card and it almost made him cry. Tyler says it was like watching himself 10 years ago. He says his dad makes promises then doesn’t keep them and crushes him. He asks when Butch is getting out and he says March. Tyler says the baby will be just three months old. Tyler asks if he’s coming to his house and Butch says it will be good for TV. Butch says he doesn’t know where he can work and may have to call Farrah to get a job in the porn industry.

Maci wakes Bentley to get him ready for his first day of school. He’s very excited. The producers tell her they will follow her up to the entrance then hang back. Bentley says he’s going to learn how to read. They go into the school while the cameras wait. Maci comes back out later sniffling and upset. She cries all the way home.

Catelynn borrowed a heartbeat monitor from a friend and they listen to the noise. Alexa drops by and listens to. She asks if they confirmed the pregnancy online and they pick a photo and then post simultaneously. They get hundreds of likes within a minute. Then the mean tweets start and Tyler says he was expecting it. They tell them they’re going to do a reveal of the sex at a party tomorrow. They have the pinata and it needs to be filled. They have a name Nova Reign for a girl. Tyler wants the boy name to be Slade. She asks why he’s obsessed with having a boy.

They talk about the party and Catelynn says she only wants the two of them in the room while she’s delivering. He starts talking about how disgusting the whole thing was. Gary gets a call from Amber during a family dinner. Leah says she doesn’t want to talk to her right now and Amber says she’s being a brat and ends the call. Robert calls Leah over and says he made her mom feel bad but she doesn’t want to call back. She agrees to call her back.

Over at Amber’s, she sits alone and stares out the window then heads out with Krystal. She asks about talking to Leah. Amber says she doesn’t have a family home for Leah. She says he has Kristina and all his family. Krystal says it’s okay for her to be a single parent. Amber says she likes that Leah has it and can’t provide it. She says she couldn’t ask for full custody of Leah because it would take her away from a family.

Maci goes to see a therapist to talk about her issues with Ryan. She says her boyfriend of two years just moved in and she’s filming a new show. She says her son just started kindergarten. She says Bentley started crying this morning then she did too. She talks about Ryan being very absent. She says she doesn’t want to lie to Bentley about his dad or burst his bubble. The therapist says Ryan seems to be an issue for her too. Maci says she wants to be able to talk to Ryan about Bentley’s day.

At the party, Catelynn and Tyler’s family make predictions on the sex of the baby and they tease Tyler for wanting to call it Slade. Cate says it sounds like the world’s best assassin. They get ready to open the pinata. It falls and it’s pink! Tyler looks a bit sad and says tampons, hairspray and mascara. They look at the photo and confirm it’s a girl. Cate says she got what she wanted again. Tyler says he’ll get used to it.