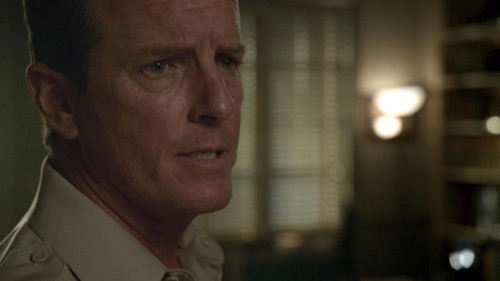 Tonight on MTV, TEEN WOLF airs with an all new Monday June 29, season 5 episode 1 premiere episode called “Creatures of the Night,” and we have your weekly recap below! On tonight’s episode, the season 5 premiere opens on the eve of the senior year.

On the last episode, the season finale ran for an hour and fifteen minutes.  In order to save the pack from Kate, Scott and Stiles returned to La Iglesia. Did you watch the last episode? If you missed it, we recapped it right here for you.

On tonight’s episode per the MTV synopsis “the season 5 premiere opens on the eve of senior year: Scott and his pack deal with the arrival of a new enemy and the return of an old friend.”

Tonight’s episode is going to be really interesting. You’re not going to want to miss even a minute of this exciting season 5 premiere! We will be live blogging TEEN WOLF on MTV beginning at 10 PM EST. In the meantime, enjoy the sneak peek preview of tonight’s episode below.

We arrive at Eichen House.

We hear the sound of a raven.

There’s a girl in a steaming shower. There’s a nurse telling her to hurry up. The nurse goes over to the girl and tells her to look at her when she’s talking to her. The girl is Lydia. She’s in Eichen House.

She’s taken back to her cell. She walks down the hallway in what appears to be a catatonic state. The nurse tells another attendant to up her dosage. She lays in her bed. Her eyes are open. The attendant begins poking her with a needle and says he needs to find a better vein. He continues to poke and prod.

She bolts up and screams. She escapes and starts fighting everyone who attacks her. She seems to have gained more control over her powers. She screams and overcomes everyone with her fighting ability.

She makes it out into the front yards of Eichen House. People come at her and she takes them down, too. Until Ethan walks up to her and says, “Sorry, Lydia, but your treatment isn’t over yet.”

Meanwhile, Scott and Stiles are chatting about future college plans under the full moon. There’s a storm going on.

At the police station, the phones are ringing off the hook. Parrish is at the station, and he complains to Stiles’s dad about why he’s been stuck behind a desk so much lately. He wants to get back out there. Sheriff Stilinski tells him to go investigate a noise complaint.

Parrish goes to an abandoned mansion. He comes to a concrete wall and hears someone trapped behind it. He goes to get something to break down the wall. The creature on the other side busts through. He grabs Parrish and claws him. He wants to know where Scott McCall is. This creature is a werewolf. Parrish’s eyes glow red. The werewolf says that Parrish isn’t a werewolf but knows that “he is definitely something.” The werewolf says that Parrish isn’t an ordinary creature. “But, then again, neither am I. Not tonight.” The werewolf’s claws glow a fierce blue and he swipes – swipes. (cut scene).

Liam, Scott, and Stiles are driving to a party, but the Jeep breaks down. Stiles says it’s an electrical problem.

Scott and Stiles are checking under the hood of the car. Liam remains in the car. Lightning begins striking the street. A lightning bolt strikes dangerously close to the car and, suddenly, the Jeep starts up again.

Stiles, Scott, and Liam pick up Malia from the side of the road.

Melissa McCall goes home after one of her shifts and yells through the house that she’ll have to return to the hospital to help out given the current state of things. Scott’s not there. But the werewolf stands in the living room. Melissa doesn’t notice him. She leaves. The werewolf finds a note on the fridge that tells him that all the high schoolers are at the school for a celebration.

Kira is standing on the car trying to get cellphone service, but the storm seems to have knocked out the cell phone towers. She and her parents are stuck on the road in a traffic jam. She gets back in the car after seeing a cute boy who’s also stuck in traffic. Her mom asks Kira what this thing at the school is. She says it’s called “Senior Scribe.”

Scott drops Liam off at the hospital and tells him to keep doing his best to control the change, being that it’s a full moon tonight.

At the hospital, Scott asks his mom where all these injuries are coming from. She says there was a jack-knifed truck on the major highway leading back into Beacon Hills. Scott realizes that this is where Kira is. He tells Stiles that he’s going to go get her and that they’ll make it in time for the senior’s special tradition at the school. He says that he’ll meet everyone there, including Lydia. Apparently, they don’t know that Lydia is being held against her will at Eichen House. It’s the star of senior year, so it seems like people are just getting back from summer break. Perhaps everyone thinks Lydia is just away.

Scott returns home and finds the note that the werewolf grabbed. The note has claw marks in it. Scott notices that the fridge won’t hold magnets and that the clock is ticking out of time. The electronics go out of whack and the house begins to shake.

Meanwhile, Parrish is in bad shape. His torso is bloody, and his wounds are steaming. He calls for backup but his radio’s not working because of the storm. He’s fading out of consciousness and sees a vision of Lydia, who tells him to “Stay with me.”

Sheriff Stilinski comes to find Parrish, and just in time.

Parrish is taken to Melissa. She says, “I thought you were going to keep him on desk duty.” He lays him on the table and says that he didn’t think anything would happen; he just sent him out to check on a minor noise complaint! Parrish bolts awake, his wounds all healed. His eyes glow bright yellow/orange. He’s out of it for a moment but then returns. Parrish says they need to find Scott. He tells them about the creature who attacked him. He tells them about the talons, and how they seemed to suck the life right out of him. Parrish seems to think that this werewolf is after Scott’s power. Sheriff Stilinski says that nobody can steal a True Alpha’s power. Parrish seems to think that this guy can.

Liam, who’s still at the hospital, overheard the conversation and rushes to find Scott. As a Beta, he has an overwhelming urge/desire to protect his pack leader.

Scott “rescues” Kira from the traffic jam on his motorcycle.

They arrive at the school.

Standing in the rain is the blue-taloned creature. He roars. He’s getting closer to Scott.

Malia and Stiles arrive at the school. They haven’t heard from anyone, including Lydia. Malia asks Stiles why he’s feeling so anxious; she can “smell” it on him. He’s worried that life will eventually pull apart his dear friends, and he doesn’t want that to happen. He admits that it was important that all his friends attend this ceremony/tradition tonight because he felt it would be a way for everyone to come together and remain strong.

Liam rushes up to Stiles and Malia and says that Scott’s in trouble.

Meanwhile, the blue-taloned man is fighting Scott. He says that he’s come to claim Scott’s power. The man’s talons lunge into Scott. A new werewolf jumps into the scene, and it looks like the young man who Kira saw while she was stuck on the freeway.

Scott appears to be losing life, but then he finds his power and breaks the creature’s arm. The guy’s talons fall off.

The young man who intervened comes up to them after the creature escapes and says, “You don’t remember me, do you?”

“Theo?” Scott explains. Apparently, this was an individual who attended the 4th grade with Scott.

Scott asks what he wants.

Theo says that he has returned to Beacon Hills after hearing about the True Alpha. It seems as if he’s come to join the pack.

Stiles thinks it’s slightly suspicious that Theo has chosen to return to Beacon Hills after all these years.

They all journey into the library and sign a shelf with their initials. Lydia is also there – and she seems relatively composed for just being tortured in Eichen House.

Scott, in addition to his initials, signs “A.A.” (For Allison Argent).

Meanwhile, the werewolf who attacked Scott fumbles into a grungy lab. Three people in strange suits and masks come forward and say, “No second chances.” They kill him. From the werewolf’s corpse fly ravens. In the special talk show after the show, called “Wolf Watch,” exec producer Jeff Davis says that these three individuals are “The Dread Doctors, scientists who worship the supernatural.” They are supposedly very powerful and will be a big worry for the town of Beacon Hills.

Next…We are back in Eichen House.

Lydia has been returned to her hospital bed. It turns out that it wasn’t really Ethan, the surviving twin. Lydia thought she was seeing Aiden but, it turns out, it was just a doctor. He says he wants to know what happened to her friends. How did they die? He asks, “What happened after senior year?” Lydia has visions of her friends’ deaths, or the situations that show them in danger – it’s hard to believe that everyone ACTUALLY died. But she doesn’t reveal any information to the doctor. He says that this isn’t a worry, as there are other methods to glean answers from the brain. He pulls out a drill and talks about trepination, the act of drilling into the skull.

Turns out that Lydia’s experiences in Eichen House are actually in the present, and the rest of the episode’s events occurred in the past. Therefore, this season will be a “flash forward.”