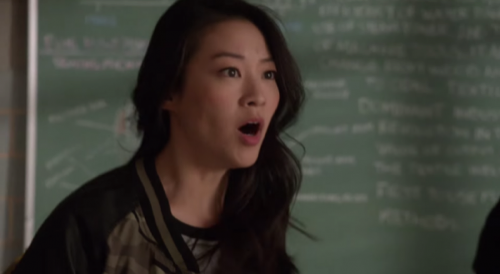 Tonight on MTV, TEEN WOLF airs with an all new Monday August 3 season 5 episode 7 called “Strange Frequencies,” we’ve got your recap down below! On tonight’s episode, an attack by the Dread Doctors complicates Scott’s [Tyler Posey] plan.

On the last episode, Scott and his friends followed Dr. Valack’s advice; and experience strange effects as a result. Did you watch the last episode? If you missed it, we have a full and detailed recap right here for you.

On tonight’s episode per the MTV synopsis “an attack by the Dread Doctors complicates Scott’s plan to protect the latest victim.”

Tonight’s episode is going to be really interesting. You’re not going to want to miss even a minute of this exciting season 5 episode 7! We will be live blogging TEEN WOLF on MTV beginning at 10 PM EST. In the meantime, enjoy the sneak peek preview of tonight’s episode below.

Theo tells Stiles that he knows everything about Donovan. He says that he went to the library and watched Stiles come out. He says that he also saw that the body went missing. They hear sirens – they belong to cop cars. Stiles says that they can’t just leave the body of the recent chimera that Theo killed. Theo suggests they take it – a good way for them to figure out who’s stealing the bodies.

Meanwhile, Liam has told Hayden about werewolves and Dread Doctors. She runs out of the club. Liam shows her his werewolf side; she punches him in the face, gets into her car, and drives off. She’s shocked.

Eventually, Hayden pulls over on the side of the road. She notices that her knuckles have healed after punching Liam hard in the nose. She hears the Dread Doctors’ voice on her radio – and her car won’t start. The voices say, “Your condition improves.” She tries to go but she can’t. The three docs approach her on the road. They say her name over and over and over again. They approach her. Liam finds her and removes the back window. He reaches in for her, pulls her out, and together they run away from the Doctors. They walk so slow. They should really learn how to run or something.

Theo and Stiles bring the body to Deaton’s clinic. They say that someone needs to stay with the body. Theo says that he will.

Scott gets a text. It tells him that there’s another chimera. It’s from Liam.

Scott and Stiles show up at her house. Scott tries to reassure her about what’s going on – but he says that it will be better if they talk face to face about what’s going on. There’s no answer from the the other side. Scott tells her that it’s okay if she doesn’t believe him right now but, soon, everything will start to make sense. The door opens slowly. Hayden, with her eyes glowing a fierce yellow and her razor sharp teeth flaring, says, “I believe you.”

Kira shows up at school with her dad. She’s in the classroom. Her father leaves to go get more boxes. Her mother sneak attacks her with a sword and she says, “Kira, defend yourself.” They startle swordfighting. The battle grows intense; however, the practice quickly takes a turn for the worse. Kira’s kitsune spirit overtakes her and her eyes grow fire red. Kira almost kills her mother, but the dad comes in just in time, slamming one of her “fox tail” emblems into desk. She stops. Kira screams, “I could’ve KILLED you!” Kira’s mom yells, “Not you! The fox inside you.”

They’re visibly worried about all of this.

The gang develops a plan to hide Hayden where the telluric currents’ convergence is the strongest. Turns out that this convergence is in the high school. They think that the telluric will disrupt the Dread Doctors’ powers, which is rooted in electricity, frequencies, etc.

Scott talks with Kira. She decides that they should figure out what’s going on with her first before she tries to help anyone else.

One of the Dread Docs shows up at the animal clinic. Theo and him start talking. Theo wonders why they aren’t curious about who is taking the bodies. Theo wonders if the docs already know and if they just aren’t telling him. He gets mad because they aren’t keeping him in the loop about everything – which was part of their agreement they had with one another. The doc leaves abruptly, as Stiles shows up. He says that whomever is stealing the bodies probably won’t do it with them standing watch in broad daylight, so he sets up a camera in the room. They leave together and stake out in the car.

Kira’s mom gives Kira acupuncture, all in an effort to “shift the power back into her hands.” They don’t know if it will work, but they give it a shot.

Sheriff Stilinski asks Melissa about whether or not the victims of the Dread Doctors could’ve all suffered from a common medical condition. She helps him out with taking a peek at their medical records.

The docs show up.

Theo and Stiles wait it out in the Jeep. Stiles still doesn’t trust Theo, and he says that he probably won’t EVER trust him. Theo tells Stiles about how his sister died, and how he was just too late to save her. Theo tells Stiles that, even if he doesn’t trust him, he’ll always be looking out for him – just like he tried to look out for his own sister. There’s a flashback: A younger Theo is watching his sister drown in the cold creek. In reality, he did nothing to save her. He’s clearly a psychopath.

Sheriff S. and Melissa are hanging out at the station. Melissa says that there’s a full moon coming up, and then she see a photo of Donovan on the wall. She asks Sheriff S if he thinks that Donovan is still alive. Sheriff S says that he hopes so, that he was just a victim of circumstance. They find out that Donovan had a skin graft the day his father was shot – and Melissa then realizes that Deaton said Tracy also had a skin graft. They have found something, medically speaking, that links these two cases together.

Hayden talks with Liam. She’s scared. She says that she’s not like him, despite her supernatural form. She was somebody’s experiment; she wasn’t born. But she says, with a smile, that if he helps her then she’ll forget ALL about the sixth grade.

Lydia tells Scott that she’s worried about Stiles and Theo, especially since they can’t use their cell phones to talk to them if something on their end goes awry.

Meanwhile, Kira has escaped her bedroom. In walks Kira’s mom. With the acupuncture needles, Kira has written “115” in the bed frame.

The gang waits for the Dread Doctors in the locker room.

Liam finds some chains. He wonders what they’re for. Scott says that if they can’t make the school a fortress then maybe the can make it a trap – and catch one of them. Liam’s visibly distraught by this revelation, as he knows the bait is Hayden.

Next, Parrish is in his car. He sees Lydia beside him and, soon, they start to make out. They rip each other’s clothes off. As Lydia touches his bare chest, he burns, and soon her flesh burns, too. This obviously isn’t Lydia. Someone is either trying to control Parish and/or take advantage of his supernatural abilities.

Malia is in the hallway when the Dread Docs traps her with some gruesome traps. They walk in.

Donovan, Tracy, and Lucas were all genetic chimeras to begin with – Melissa and Sheriff S discover this by sifting through the kids’ medical records.

Liam and Scott get into it. Liam’s not cool with the plan. Scott raises his voice and says that somebody is going to have to suck it up and be the bait if they’re going to try to save more kids from winding up dead. Liam cools his jets and asks Scott to do everything in his power to save her.

Hayden starts freaking out because she has forgotten her pills. She says she has some in her locker. Scott goes to get them for her. Lydia tells him that she’ll keep watch.

Scott approaches her locker when he hears something being dragged across the floor and into a classroom. He goes to investigate. He walks into the bio lab. He’s stabbed with a sword – and it’s Kira who’s wielding the blade. Her eyes are a fierce red and shes says, “You know who I am. I am the Messenger of Death.”

Lydia sees Tracy standing at the end of the hallway. She approaches her. Tracy says that she needs her to scream. Tracy rips out Lydia’s tongue. Lydia falls to the floor. She bleeds profusely.

Theo and Stiles are still in the Jeep. Together, they try to walk through justifications about what distinguishes self-defense from murder. Theo smells a strong aroma of smoke. A flaming fist punches his face. The Jeep is then flipped over. Stiles is knocked out unconscious. Fire begins to engulf the Jeep. A man, obviously Parrish, walks into the vet clinic.

Next, Parrish walks out of the animal clinic carrying the chimera’s lifeless body.

At club Sinema, Cory, the boyfriend of the scorpion chimera, pounds back some drinks. Mason walks in and asks to see his arm. He asks, “It healed, didn’t it?”

The docs walk into the locker. They destroy the box meant to disrupt their frequencies. They say, “We’re on a frequency you can’t possibly imagine.”

Scott continues to be attacked by Kira, but then his palm receives a small cut. He snaps back to reality. Turns out everything was just a hallucination. Malia and Lydia were also afflicted by these hallucinations, all manufactured by the Doctors no doubt.

Liam and Hayden have been taken back to the Dread Doctors’ laboratory.

Theo manages to rescue Stiles from a fiery death.

Melissa walks into her house and discovers an unidentified body on the countertop – it has been stabbed with Kira’s sword. Melissa lets out a scream to rival that of Lydia’s – and the episode ends.