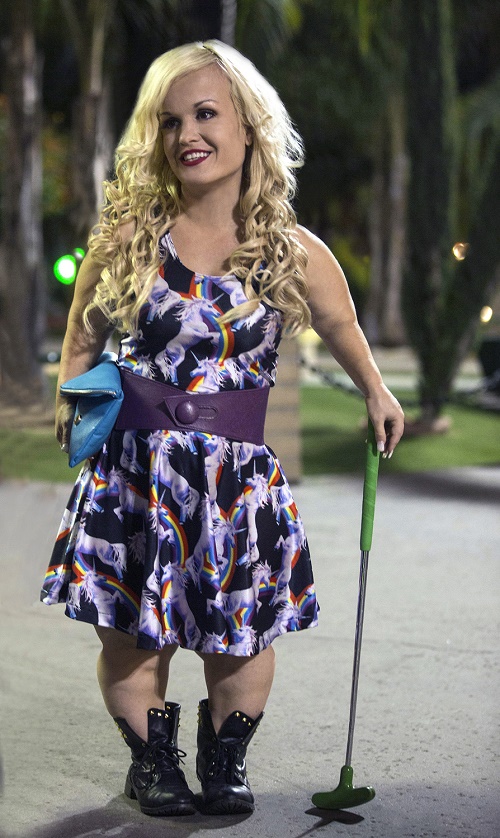 Terra Jole, the standout star of Little Women: LA, spoke with CDL exclusively about her pregnancy, her cast mates, and her music career. Terra Jole may be a little person, but she sure packs a big punch. Terra is one strong woman and seems to be at the heart of the group’s amazing dynamic. The group of women that Terra calls her closest friends are her castmates on the show and include Tonya Banks, Elena Gant, Traci Harrison Tsou, Christy McGinity Gibel, and Briana Manson. The women have all returned for season two of the popular Lifetime series and we couldn’t be happier about that!

Throughout season one of the show, Terra held the spotlight as she battled with boyfriend Joe Gnoffo about taking too long to pop the question, called out frenemy Christy for breaking her sobriety, and built a wall between herself and newest member to the group, Elena. In addition to all that, the Britney Spears impersonator released a song she wrote, “Booty Bee,” along with a hot video to go that included all her lady friends from the show. This season has Terra at the center of attention again – but for very different reasons. The second season previews teased a pregnancy, so fans thought that likely either Christy or Traci were expecting since both were recently married and anxiously trying to get pregnant. Terra shocked fans of the show when she announced that she and longtime boyfriend Joe were expecting their first child together!

CDL had the chance to speak one-on-one with international star Terra and she told us all about how she felt after finding out that she was pregnant: “It was so scary! Coming to the realization that I’m going to be a mother is exciting but scary at the same time because I don’t know what to expect.” We asked about how Joe took the news and what the couple is doing to prepare for baby. Terra tells us, “Joe has been super supportive. You know, we’ve been together seven years, but now our relationship has just really blossomed.” She added, “It’s just been a whirlwind, but we are doing a lot of prep work!”

She promises we’ll see a lot of the preparation on the show as they plan the nursery and get ready for all the changes to come. She seems to have a great support group in her friends, especially Elena. We asked Terra what happened after season one that brought her and Elena closer. She shared how the two transformed their relationship to become great friends, “At the end of season one, we did lunch and a few small things together. It was really just baby steps. We realized how much we had in common and just started having more outings together. It’s been nice. We even do double-dates together with her and [Elena’s husband] Preston. They are a really good match for us—for me and Joe. We have a lot of fun together.”

And Terra does love to have fun. Case in point, she toured with Miley Cyrus and had a blast. We asked what it was like touring with controversial Miley. Terra tells us, “Miley is great—I love her!” She shared that she appreciated how Miley really took her and the other hired dancers seriously, adding, “She is so legit. She hired us for a dancing routine—we’re talking seriously good dancers. We weren’t hired just because we’re little people, she legitimately wanted good dancers.”

Speaking of touring, we asked Terra if she plans to slow down after her baby is born. Terra tells us, “I’ll continue in entertainment,” explaining that her mom worked and was very busy while Terra was growing up. Terra is grateful because she’ll have more flexibility to be with her baby: “I’m lucky to be in this industry—it will allow me more time with my child. Hey, if Jessica Simpson can tour with her kids, so can I!” Does this mean we’ll get to hear more music from Terra? Yes! Terra says, “I’ll be releasing my album this coming spring, possibly late spring.” Though we loved “Booty Bee,” Terra tells us the album will offer some great PG-rated dance tracks. The show provided more exposure for her music. We wondered how else this has impacted Terra’s life.

Terra shares, “As a little person, people want to take pictures of you. You know, you’re walking down the street and people want to take a picture of you. It is hard for people to understand what a little person goes through.” She adds that she is noticing a difference as she gets stopped on the street as fans recognize her from the show; people share stories of what they’ve learned from the show, and they are all around more respectful. The show highlights the struggles Terra and other little people are challenged with in their daily lives, such as driving and going grocery shopping, but also highlights the medical concerns they must deal with.

Before letting Terra off the hook we asked her to tell fans what her favorite junk food is, and we are pretty impressed! Terra says, “I’m obsessed with low-fat Triscuits!” So that is how she stays so fit! Well, she must have a bad habit or two, right? Terra admits, “I don’t know how to filter.” She goes on to tell us how she sometimes talks before thinking everything through. She’s getting better, though!  And now that she’s going to be a mommy soon, she’ll likely be working overtime on breaking any bad habits. Be sure to turn in to this addictive show Wednesday nights at 9 on Lifetime. Don’t forget to follow Terra on Twitter, “Like” her on Facebook, and visit her website.