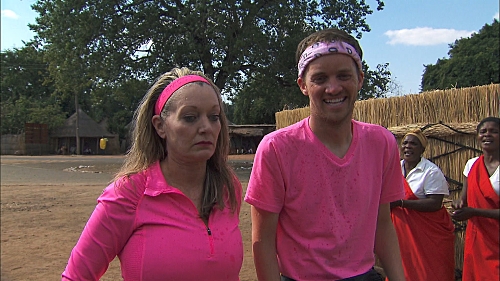 Tonight on CBS the Emmy award winning show The Amazing Race hosted by Phil Keoghan returns with an all new Friday October 16, season 27 episode 4 called “Good Old Fashioned Spit in the Face.” On tonight’s episode, the race continues at Victoria Falls along the border of Zambia and Zimbabwe.

On the last episode, attention to detail was paramount during a meaty challenge and one team faced a penalty after a costly mistake. Did you watch the last episode? If you missed it, we have a full and detailed recap right here for you.

On tonight’s episode as per the CBS synopsis, “as Racers soar high above the breathtaking Victoria Falls toward a double U-turn, Team Texas uses their express pass in the hopes of eliminating The Green Team.”

#AmazingRace begins in Argentina with Kelsey and Joey talking to Josh and Tanner about u-turning Justin and Diane. Tanner and Josh asks them to put them up as the second u-turn so it won’t matter since they will always be gone and they promise to pass them the express pass once they’re done. Tanner and Josh leave first on the next leg headed to Zambia in Africa which is home to Victoria Falls, one of the seven wonders of the world. They have to head out by bus.

The other teams all talk about eliminating Justin and Diana if they can. The buses show up and they head to Buenos Aires. They are all on the bus. Once they land they have to go to Mukuni Village, a 1000 year old village. The first flight lands and Tanner and Josh are slow because he’s limping. Kelsey and Joey get ahead and Tanner and Josh are second. Justin and Diana are hoping to beat the Texas guys to the u-turn. At the village, the teams are welcomed in the local fashion

Kelsey and Joey are there first and they get spit on for luck. Tanner and Josh show up next. They get spit on in the face as their #Welcome. Justin and Diana are there third. Kelsey and Joey get a clue to go to Batoka Aerodrome to get their next clue. They head out. Tanner and Josh go next then Justin and Diana. Jazmine and Danielle are at the village last of the first flight teams. They also get their clue. The second flight lands and Cindy and Rick are headed out first.

They’re followed by Denise and Earl and the cheerleaders then Chris and Logan in last place. At the aerodrome, Kelsey and Joey get the #Roadblock that they go to Victoria Falls on a microlight. Josh and Tanner used their express pass to move past the crowd. Justin thinks it’s dumb to use the pass now just so they can u-turn them?

The microlights start taking off. Kelsey is up in the air and Joey talks about her being a risk-taker. Diana takes off for her team and Justin says he’s jealous. Tanner and Josh hope to find the u-turn at the next detour. Justin says if you u-turn a team right behind you, it never works out for you and says they have no express pass to protect them once Justin and Diana come for them. Tanner and Josh worry that they’re not far enough ahead.

Justin offers Joey an alliance. Kelsey and Joey are now playing both sides with a secret alliance with Justin and Diane plus their deal with Tanner and Josh. Jazmine and Danielle show up in 4th place and they tell them that Josh and Tanner skipped ahead likely so they can u-turn someone. Cindy and Rick make it to the village and get their spit blessing then James and Denise followed by Chris and Logan. Tiffany and Krista are in last place.

They look for the big red and yellow flag while on the microlight soar. Kelsey saw the flag on a bridge and Diana spots it too. Tanner and Josh make it to the next spot. Kelsey lands and she and Joey head out. Diana lands next and she and Justin head out to Victoria Falls. He tells her he made an alliance with Kelsey and Joey. After they leave, the others talk about the plan to take out Justin and Diana. Jazmine and Danielle head out of the microlight place next for the falls.

The other teams show up to do their microlight jaunt. Kelsey and Joey head to the falls to find the next clue. Diana and Justin are close behind by just a few feet. The next clue says to go to Shoestring, Zimbabwe across the border. Josh and Tanner are still stuck at the border crossing. Jazmine and Danielle seem to be headed for the wrong bridge instead of the pedestrian bridge. They are actually at a border crossing instead of doing what they are supposed to do.

The other teams are wrapping up their microlight jaunt. Danielle and Jazmine are really screwed up with their bridge error. Cindy tells Rick that Josh and Tanner were stupid and didn’t use the express pass at the detour but the roadblock which is much shorter. Josh and Tanner make it to check in with Zimbabwe and find out they won’t get to leave until 8 am and another team leaves at 8 then another at 10 minutes past that. They realize they blew their express pass for nothing.

Josh and Tanner say they have to hurry fast in the morning. Justin says he’s confident since they’re starting the same time as the Texans and one of them is injured. Next morning, Justin and Diana tells Kelsey and Joey they won’t u-turn them at the board. Josh and Tanner are determined to still u-turn them. At 8 am, the two teams get their clue. It’s a #Detour called Wood or Croquet. One is to finish off a handcrafted wooden souvenir. The other is to play croquet and score against a local player.

Both Justin and Diana and Josh and Tanner decide on croquet. The next two teams leave 10 minutes later. Cindy and Rick choose the art challenge and Kelsey and Joey head for croquet. The next teams leave at 8:20. Logan and Chris do the art and so do the cheerleaders. Denise and James decide to do croquet. The read that a u-turn is ahead. At the hotel, they get a croquet demonstration. They have to dress up in straw caps and bow ties.

They are told how to play the game then shown. Justin and Diana score one point. Kelsey and Joey make it to croquet and get suited up. Rick and Cindy get to the art co-op and start staining their giraffe. Chris and Logan also show up to the co-op then Jazmine and Danielle and Tiffany and Krista too. They have to stain then wait for it to dry so they can polish. Tanner and Josh get their second point. Kelsey and Joey are struggling but finally get one point. Justin and Diana just need one more point.

Denise and James head to croquet and get dressed up. Tanner and Josh get their fourth point. Joey gets a second point. Diana scores their fifth point and they are now in first place. They head to the pit stop at an orphanage with kids from 6 months to 16 years. The Rose of Charity is the pit stop for this leg. They head out in a hurry. Josh and Tanner get their fifth point and rush out too. Kelsey and Joey are on point three. Josh and Tanner and Justin and Diana are all waiting on a cab.

Logan and Chris are arguing over their giraffe. Rick and Cindy are trying to fan their giraffe dry then start polishing. Justin and Diana get a cab and head out first. Josh and Tanner are behind them. Denise and James get their fifth point and head out. Kelsey and Joey get theirs too. Phil greets Justina and Diana who decide not to u-turn anyone. Justin says they will let them fail on their own. Justin and Diana hand over all their money to the charity.

Phil tells them they are in first and head out now on the next leg. Josh and Tanner show up in second place and are happy to see they didn’t u-turn them. They are still planning on doing it to them later, though. Justin and Diana race off. Tanner and Josh hand over all their cash too and are told they need to decide who to give the express pass to. Phil says he will hand it to them when they show up. They don’t want anyone mad and can’t decide who to give it to. We’ll see next time!