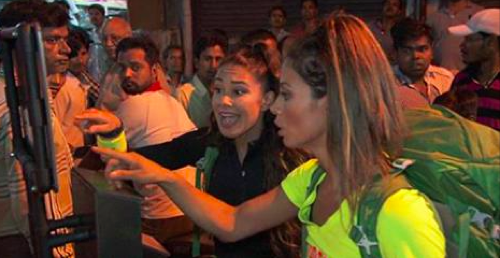 Tonight on CBS the Emmy award winning show The Amazing Race hosted by Phil Keoghan returns in an all new Friday November 27, season 27 episode 10 called “Bring the Fun, Baby!,” and we have your recap below. On tonight’s episode, the race continues in Agra, India.

The Amazing Race is a reality television game show in which teams of two people race around the world in competition with other teams. Contestants strive to arrive first at “Pit Stops” at the end of each leg of the race to win prizes and to avoid coming in last, which carries the possibility of elimination or a significant disadvantage in the following leg.

On the last episode the six remaining teams visited Agra, India, where they faced a U-turn and some duos enjoyed the sweet taste of victory after a candy making challenge. Did you watch the last episode? If you missed it we have you covered with a full and detailed recap right here for you.

On tonight’s episode as per the CBS synopsis, “Racers face a third U-turn for the first time in the show’s history, and teams try to power through an exhausting, late night detour on their way to an Indian wedding.”

#AmazingRace starts with Justin and Diana leaving the Taj Mahal in Agra India at 510 pm. They go to Kachora Bazaar to find a clue and read there’s another u-turn this leg. They run off in a hurry. They discuss whether they should u-turn Chris and Logan. Kelsey and Joey leave in 2nd place and talk about how it’s their third 2nd place finish and how they’re tied of it and want to beat Justin and Diana.

Chris is vomiting just before him and Logan head out in 3rd place. They catch up to Kelsey and Joey. At the bazaar, Justin and Diana grab the clue and see it’s a #Roadblock. They have to blow up balloons and fill a giant net then carry them by bike to a wedding planner to get their next clue. Justin decides to do this one. A crowd gathers to watch him. A balloon pops and the crowd boos him.

Tiffany and Krista head out in 4th place talking about how no one expected them to last this long. Justin keeps popping them and his hands are shaking so he pops several. Kelsey and Joey and Chris and Logan are there before he’s finished. Logan tells Chris to forget it and that she’s doing it. Denise and James are last to leave almost two hours later. They rush out knowing it will be a tough leg.

Chris tells Logan to hurry and she says shut up and get as far away from her as possible. Justin gets his balloons onto the bike and heads off. Justin talks about how scary this is and how nuts the streets are and how scared he is. Diana has tattoos and is putting them on kids while Joey works on the challenge. Some adults want them too and gather around her. Chris keeps nagging Logan.

Justin makes it to the wedding and gets a clue then has to bike back at top speed. He makes it back while the others are all still working. He dances around and they head out. The other teams call him obnoxious. They head out towards the u-turn. Chris keeps chewing out Logan. Joey is on his bike and says the road rage here is insane. He makes it to the wedding planner and gets their clue.

The cheerleaders show up and Tiffany does the balloons. Kelsey and Joey head to the bookstore knowing there’s a u-turn. Logan finally gets on her bike and heads out as fast as she can and says it’s crazy. Denise and James are there and she tells James to do the balloons. Logan gets her clue and heads back. James’ net is tangled and Denise asks Krista not to u-turn them. She says they won’t.

Justin and Diana get out of their tuk tuk and there’s a third u-turn for the first time in the race. They u-turn Chris and Logan. They now face a #Detour. They get to bring the groom or bring the fun. One team carries a heavy light fixture while one pushes the generator on a cart. The other is to deliver a popular carnival ride and give kids a ride. Justin and Diana choose the latter.

They get back in their tuk tuk. Kelsey and Joey decide to do the groom. Tiffany gets done with her balloons and James is the last still working on balloons. Someone rips open Tiffany’s balloon net and almost all her balloons are lost while she’s riding on her bike. She starts crying. She makes it to the planner and he still gives her the clue.

Justin and Diana make it to the carnival and he checks the wheels to make sure they’re good. They have to go half a mile down a busy street. Kelsey and Joey make it to the procession for the groom. He cranks the generator and the lights light up. She picks up one of the chandeliers and off they go. James is still working on his balloons as Tiffany and Krista leave.

Logan says she’s worried they’ll be u-turned. They find out they are and Chris is aggravated since he’s already sick. Logan calls Chris an ass because he’s yelling at her. James finally gets on his bike and gets the clue and heads back. The cheerleaders are hoping they’re not u-turned and are happy to see they’re not u-turned and it’s Chris and Logan instead of them.

They decide to do bring the groom. They get mauled by kids on the way to their tuk tuk. Joey is glad they are following someone so they won’t get lost. Kelsey says she hopes they won’t be this sweaty at their own wedding. Justin and Diana jog with their carnival ride as Chris and Logan show up to the carnival ride place. She tells him to pick a small one and they stop to ask directions.
Chris and Logan hurry trying to make up time and are chased by a ton of kids. Chris says it was hard since he is feeling so sick and says it’s one of the hardest thing he’s had to do. Justin and Diana are also surrounded by jogging kids. They make it to the wedding and steer it into the kids’ play area. Now they have to get eight kids onto it. Justin dances for them and they push them on the swing.

They get their clue and find out they’re heading to the pit stop to check in. They head out followed by kids and Phil is right out back. There are about 30 kids on the mat for their check in. Phil tells them they are first place again. They each win $5,000 for this leg. This is their seventh first place. One more win and they tie the record and two more means they break it.

Kelsey and Joey are still on the way with the groom and they finally make it there. The groom gets off the horse and they lead him into the wedding. He greets his bride and they get their clue. They read they have to search the party for Phil. They are also followed by more kids and Phil tells them they are in second place. Phil says they were just minutes behind them.

Denise and James decide to bring the groom. Logan and Chris make it to the carnival and he says they have to give them a ride. Logan yells at him just to park it. They load up eight kids and push them. They’re done and head back to start the other leg. Tiffany and Krista make it to the groom processional. They try and crank the generator and are struggling. They are getting frustrated.

They finally get it cranked and head out. Logan and Chris make it to the wedding thing and they are ahead of Denise and James. Chris gets his generator started right away. Denise and James arrive at the wedding party and James gets it cranked then he lifts the chandelier while his mom does the generator cart. Tiffany and Krista are struggling on this one because it’s so heavy.

James tells his mom they’re last and are done. They are just behind the other two team and Phil says they’ve been eliminated. James says he and his mom reconnected and she’s a lot tougher than he thought. James says when they started the race they weren’t close and they are so much closer now. Denise says she loves him unconditionally. They hug the cheerleaders then go.