The Amazing Race Finale Recap – Kelsey and Joey Win it – Justin and Diana Take Second: Recap Season 27 We Got a Chance Baby! 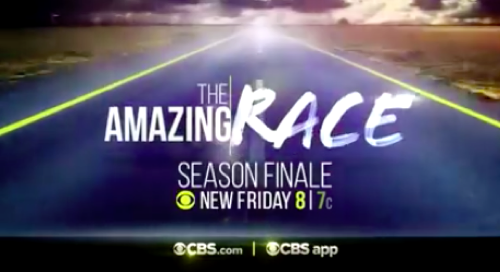 Tonight on CBS the Emmy award winning show The Amazing Race hosted by Phil Keoghan returns in an all new Friday December 11, season 27 finale called “We Got a Chance Baby!,” and we have your recap below. On tonight’s episode, season 27 ends with the final teams racing on Long Island, N.Y., to the finish line.

the last episode racers faced a third U-turn for the first time in the show’s history, and teams tried to power through an exhausting, late night detour on their way to an Indian wedding. Did you watch the last episode? If you missed it we have you covered with a full and detailed recap right here for you.

On tonight’s episode as per the CBS synopsis, “the final three teams race to Long Island, New York where, after five continents, 10 countries and more than 34,000 miles, one will be crowned winners and awarded the $1 million prize, on the season finale of THE AMAZING RACE.”

The #AmazingRaceFinale begins with a look back at prior legs and an update who was sent home and everyone’s stress over the green team staying in first place. Logan and Chris leave first and are headed for Long Island.

Kelsey and Joey leave a minute later. Justin and Diana leave in last place, but the flight will equalize all of them because there’s only one flight. They’re headed to Long Island and Logan says Justin will be over-confident since that’s where he’s from.

Justin and Diana check their bags – did the others do that as well? The plane lands in New York and they head to Randall’s Island. That’s where Justin proposed to Diana on his Amazing Race style proposal. They go to the FDNY Academy.

Justin argues with the cabbie and he leaves. The others get their cabs to stay. The racers have to train with the New York Fire Department. They climb a ladder up to a burning building and search for a victim trapped inside.

Chris says it’s heavy. Joey is running behind the other two. Justin makes it into the building then Chris. Joey is still heading for the ladder. They put oxygen masks on the guys in the building to start the search. Joey is at the ladder now.

The other two start their crawl towards the fire following a hose. Justin sees the flames and goes looking for his victim. Chris makes it there too. Chris gets the kid victim and Justin has his too. Justin is first out with the dummy and puts it on the gurney.

Chris drops his on the ground. Now they strip off the gear and run with their trainer. Joey is still inside. Now Justin has to put capitals of places they visited in order. There are a couple of extras to try and fool him. Joey gets his dummy to the gurney.

Justin gets it right first time. They are told to go to the Triple Crown location – the Belmont Stakes. But they don’t have a cab. Chris is working on the capitals and he misses. Justin and Diana find two cabs but neither know where it is.

Justin and Diana run off looking for another cab. Joey gets the capitals right and gets the clue. Chris is still working on it. He makes an adjustment and finally gets his clue but they’re in last. Chris and Logan’s cab has driven away.

Logan tells Chris that he’s nice to Kelsey and Joey and gets out of the cab but he’s mean to her. They continue to bicker on the bus. Chris and Logan get off the bus and find a cab. Justin and Diana spot cabs and need to get off the bus.

At Belmont Park is the third leg of the race. Kelsey and Joey get their first. They get their clue and are told to fly on a helicopter to the Hamptons. They go inside and find choppers. They get in one and take off for the Hamptons.

Chris and Logan get to the racetrack and get their clue. They argue more and Chris takes off the fireman’s pants and boots and throws them down then gets into the chopper. Logan nags at him. Justin and Diana finally get their and get on their flight to the Hamptons.

Justin and Diana land and run for the Sea-Doos as well. They get on and race out. Kelsey and Joey look for the lobster boat and the others are searching as well. Now they have to pull up and replace seven lobster pots and then do another memory challenge.

Chris and Logan make it to their boat. Justin and Diana are the last on the boat. The lobster pots are harder to pull in than anyone expected. They all talk about how that’s the hardest challenge they’ve had during the whole race.

You have to know your country flags. Fortunately, Kelsey and Joey specifically took note of all the country flags and do this fast. Logan and Chris now start their flag challenge. Logan says “I don’t know what Africa’s flag looks like.” Hmm… That’s a continent…

Kelsey and Joey spot the clue box. They have to assemble six Adirondack chairs then arrange the chairs in order. Justin and Diana make it to shore and get in their dune buggy. Logan and Chris are still at the boat with the flags.

Diana is a good builder and she’s working fast. Justin hoots and hollers and stresses out the other team. Kelsey and Joey start arguing and Justin gets excited. Joey puts in their last nail and they put their towels on the chairs.

The guy checks them out and says it’s not correct. He points out some chairs that aren’t nailed in alignment. They have to pull some apart. Justin is thrilled. He points out more errors and they have to take some boards out.

Phil tells them five continents, 10 countries and says they won the Amazing Race and the million dollars. Joey says they’re moving in together and he’s paying off his parents’ house. They are thrilled. Justin and Diana get their clue and head off knowing they lost.

Justin says he should have just paid the extra cab. Diana says when you can pinpoint the one thing you did wrong, it will haunt you. Justin says he doesn’t know if he’ll ever get over this. Phil says they had seven wins and they are team number two.

The Texas boys laugh gleefully. Chris and Logan talk about who they hope won. Logan says if Kelsey and Joey won, she will be mad since that taxi won it for them. Phil says he knows it’s not been a great day for them. He says they don’t seem compatible.

Logan says they are ridiculous when they fight and maybe need some therapy. She says they fight but aren’t breaking up. Phil asks if this is healthy and Logan says “don’t try this at home.” Justin says it’s a dream come true to be there and will appreciate it once he gets past being upset.