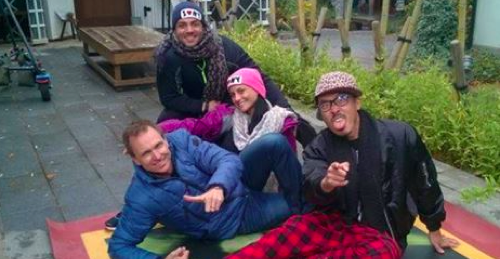 Tonight on CBS the Emmy award winning show The Amazing Race hosted by Phil Keoghan returns with an all new Friday March 6 season 26 episode 3 called, “#MurphysLaw” and we have your weekly recap below. On tonight’s episode, the race continues in Thailand.

On the last episode teams raced through Nagano, Japan where Racers took on an Olympic-sized Detour, and one team took a tumble that may have jeopardized their chances in the Race.

On tonight’s episode as per the CBS synopsis, “teams race through Thailand – Tension rise in Thailand as one team forgets their fanny pack, putting them behind, and one Racer celebrates the end of the leg when they pop a very special question

#AmazingRace is in Nagano, Japan. They check into hotel rooms – the blind daters get separate rooms if they want them. Jelani and Jenny are the first that are off to Thailand. Laura and Tyler are the next team out. Aly and Steve then Harley and Jonathon leave as team three and four. Harley and Jonathon talk about their #DateNight at a hot springs. #TeamBlondeDate talk about how they are too like each other to be a couple but are friends now who like the same type of guy and are ready to race.

At the airport, Jenny and Jelani are told they can’t buy tickets until morning. The other couples find the same when they show up. Most of the teams are at the counters at the same time. The first flight gets in at 4:50 pm. Another team finds ticketing that lands at 9:10 pm. Another team gets in at 11:59 pm. #TeamNewKid can’t find a flight until tomorrow. Looks like four teams made the first flight, three on the second and then the others are later. #TeamNewKid is still waiting to hear on their flight.

In Phuket, Thailand, the first flight touches down. The first group of teams heads to Patong Beach. The first teams are told to head to a B&B and get their next clue at 8:30 am. They decide to party with the others since they have spare time. The next group that shows up to the beach gets a 9:00 am departure. The other teams wonder where Harley and Jonathon are. They are getting on their second flight that will land at 9:30 am so that won’t put them too far behind the others. The first set of teams are off.

Jonathon and Harley’s cab has to stop for gas and they decide it’s #MurphysLaw. #SochiLove is first to the upside down house the next morning. Everything is on the ceiling and the whole place is flipped. There are clues in the toilet on the ceiling. They get the #Detour choice of Ski or Tree. You have to wake board around an automated ski course or serve a meal to a diner via zip line. Mike and Rochelle are in second and then #TeamJJ and #RxforLove. Many of them choose the tree

Harley and Jonathon get to the beach and are happy to see they’re not too far behind. Steve and Aly both wipe out fast on the wake board course. At the tree, the teams have to put on waiter suits. #TheLegalTeam gets dressed and head up to the Fierce Tiger Grill. Some of them don’t take everything on the list on their tray. It’s not clear if they had to take everything in one trip or not. We’ll see. #TeamJJ also decided to try and ski. They deliver and get a head shake for no.

#TeamRxforLove argue about what they’ve done by not taking more stuff. But it’s too late and they have to zip. Hayley chews out Blair and says he needs to listen better. #TheHairstylists also don’t bring everything and drop some stuff. Jelani and Jenny try again and split the items between them to try again. None of those doing ski are doing very well either. Hayley won’t shut up and continues to nag Blair.

Mike and Rochelle take first with a successful tree delivery and get a clue that sends them to My Way Cabaret. One cab driver says it’s a “lady boy show.” Hayley and Blair take second and he tells her to squash the nagging. I cannot see this couple working out. Laura and Tyler take third place. The two ski teams decide to bail and try the tree. Harley and Jonathon head to the tree even though one of them is scared of heights.

Mike and Rochelle get to the cabaret and find out they have to dress up and learn a number. Mike is laced into a tight dress then has to put makeup and he has no clue. It’s not pretty with his huge beard and all. Bergen and Kurt take over fourth place. Jenny lands and waits for Jelani and he finally gets it. That puts them in fifth. Laura and Tyler show up and get into their costumes. Tyler is not happy. Mike and Rochelle are worried about the dancing since they messed up so bad on the last dance challenge.

Just as Matt and Ashley were set to try again, he spilled the champagne and she tells him to just pour the soup into the glass but he says they can’t do that. Aly and Steve land it on their first try and move into sixth. Bergen and Kurt win date night for their leg. Jelani and Jenny are in fifth. Hayley puts on Blair’s makeup and he says she’s so mad she may jam the eyeliner into his eyeball. Bergen and Kurt have no issues with the dress and makeup and decide they’re fabulous.

Matt and Ashley finally deliver and get 7th. Jeff and Jackie get 8th. Mike and Rochelle are on stage doing their number and the audience is in hysterics over Mike and his beard. He gets huge applause but fails on the choreography. They failed but get to try again while the other teams are still getting made up. They fail again. Harley and Jonathon are at the waiter place and looks like they are well in last. Mike and Rochelle are on try number eight. They finally get a pass and take first.

They are off to the pit stop for this leg at Baba Nest Rooftop Bar. Tyler is not happy to be in feathers and asks where he gets his n-ts chopped off. They fail on their first attempt. Jelani and Jenny are up next and they fail too. It’s like the slow dance walk disaster all over again. Jonathon is super scared of heights but does the zip line. He says Harley is the yin to his yang and is clam. They get it on their first try and head off to the drag show.

Hayley and Blair shake their tail feathers and take second place. Bergen and Kurt are dancing next. They fail. Jelani and Jenny make it on their fifth try to take over third place. At the pit stop, Mike and Rochelle race up to Phil and get the formal welcome to Phuket. They are thrilled. Mike is still in eyeshadow! They win a trip for two to Prague from Travelocity. Mike says they are the first dating couple to win a leg. Matt and Ashley pass on their first try to take 4th. Matt was totally hamming it up.

Laura and Tyler are on try number seven while Aly and Steve pass with them. That puts them into 5th and 6th. Bergen and Kurt get their clue on try number seven. Steve says the good thing was that he has no shame. He’s still in his eyeliner and lipstick. #TheHairstylists have to go back because they left a fanny pack. Jeff and Jackie are on try number three and they get their clue. That puts them in 8th place. Ashley calms her man down and says it’s okay. Harley and Jonathon make it to the cabaret.

Jonathon says he’s been to a million drag shows and swore he’d never do drag. Hayley and Blair take second after he carries her pack for her. 3Rd goes to Jelani and Jenny and Laura and Tyler take 4th with Aly and Steve close behind for 5th. Matt and Ashley and Kurt and Bergen arrive at the same time but Matt and Ashley beat them to take 6th. Kurt and Bergen take 7th. Matt promises Ashley that every morning he will tell her he loves her then he drops to one knee and offers her a ring.

It’s a #RaceProposal. Everyone cheers and she says yes. No wonder he was worried about his fanny pack. Kurt and Bergen give them their date night card. It makes Bergen all teary because he says he wants something like that. The New Kids get a thumbs up and they too head out to the pit stop but they are clearly in last place. Phil tells them that they are in last place and says it’s non-elimination and they are thrilled. Phil says they will hit a speed bump and in the next leg they will have to get past.