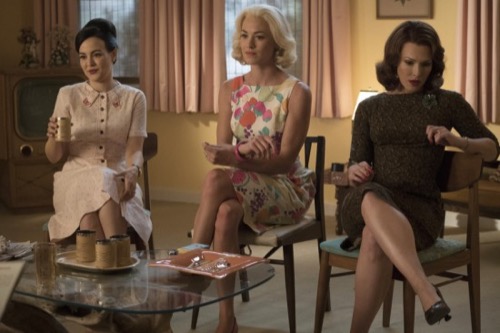 Tonight on ABC their new drama The Astronaut Wives Club airs with an all new Thursday July 2, season 1 episode 3 called, “Retroattitude.” We’ve got your recap down below! On tonight’s show the women ready themselves for Scott Carpenter’s [Wilson Bethel] launch and a move to Houston; at the same time, Rene [Yvonne Strahovski] receives the opportunity to tell her story in LIFE Magazine; and Deke [Kenneth Mitchell] deals with some troubling news that puts his future as an astronaut in doubt.

On the last episode, as Louise and Alan Shepard bask in the success of his mission, Betty Grissom prepped for Gus’ launch and turns to Louise for advice. And Annie Glenn grappled with her stutter, anticipating that the press wanted to hear from her after John’s orbit is completed. Did you watch last week’s episode? If you missed it we have a full and detailed recap, right here for you.

On tonight’s show per  the ABC synopsis “It’s Scott Carpenter’s turn to go up, and as the world – and the Astronaut Wives – ready themselves for his launch, Rene receives the opportunity to tell her own story, in her own words, in LIFE Magazine. Meanwhile, tensions flare as Deke deals with some troubling news of his own that questions his future as an astronaut, but all the while, the women come together to support each other. It’s onward to Houston.”

Tonight’s episode is going to be an exciting one filled with drama that you won’t want to miss. Be sure to tune in for our live coverage of ABC’s The Astronauht Wives Club tonight at 10 PM EST!

Deeks Slayton was supposed to be next one into space but for some reason his heart arrhythmia is only now just beginning to work against him.

NASA told Deeks that he can no longer go up and the only thing that’s changed recently is the fact that he and the rest of the guys had their own little rebellion last week. So, at the moment, Deeks believes it’s the Glenns’ fault for him staying earthbound. And the angrier he gets, the more his wife is afraid.

And it’s Marge Slayton that’s the real reason her husband isn’t going up.

Apparently, NASA doesn’t want Marge’s former husband being on the front page. And that’s what would happen if Deeks ever goes up. So, rather than bring up the Slaytons at all, they simply found another family to focus on. And unfortunately they chose the Carpenters.

They wanted to showcase more than astronauts. NASA was running an entire feature dedicated on an All-American wholesome type family. So Deeks was actually pushed aside in order for them to continue selling that dream but the Carpenters ended up destroying their own image when it came for them to be on the front page.

Rene Carpenter later told the whole world that she wasn’t going to be praying for her husband while he was in space. And although there is supposed to be a separation of church and state in this country, Rene was then vilified for wanting to keep her religious identity to herself.

So despite what they did to the Slaytons, NASA still went on to have a PR disaster on their hands.

Rene was being accused of being an atheist and behind the scenes Deeks was taking out his frustration on her husband Scott. Which was unfair, but at one point, Rene even had to break up a fight between because all relations had deteriorated. And still Marge kept silent.

Marge saw for herself how much her husband was hurting and yet she never stopped him from lashing out at others. And she easily could have.

The truth would have went a long way to heeling old hurts. Just look at the Coopers. In another time they should have been divorced by now but they’re not.

Trudy chose to stand by her husband when it looked like he needed a family to go into space. So they’ve been carrying on as if nothing had happened in front of the cameras and then when the world wasn’t watching – Trudy has been throwing Gordon’s old affair in his face. But, overall, something has changed between them.

And they’re no longing fighting like they used to.

Trudy stopped trying to make demands on her husband when she knew he couldn’t fulfill them and he in turn stopped actually sleeping with other women. Thus there’s hope for them yet. And now that the astronauts are getting relocated to Texas – maybe a change of atmosphere will do them some good.

Though, Rene is probably going to miss her old house. She was in the new one when she got word that Houston had lost contact with Scott in space.

According to them, he veered off path and in doing that was running low on fuel during reentry. So later, after he had thankfully returned safe, everyone asked him what he was doing that was so important he forgot everything else. And he told them that he was looking as fireflies.

Outer space, constellations, and fireflies. They all appeal to Scott. So when he got the chance, he decided to enjoy it.

But after he came down, Scott said he didn’t feel like there was ever a need to go back. He’s seen what he wanted to see. And he’s glad for the opportunity.

Next up is Wally and he’ll the first to orbit several times. So naturally his wife is crowing his wife is taking their upcoming mission as their due. And she can’t wait to give her own interview.

Rene wrote her article to explain herself in her own words and, you know what, she knows how to write.