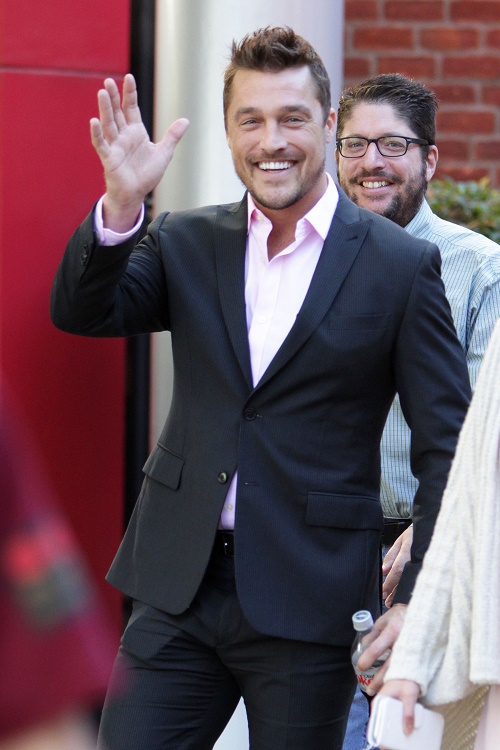 Season 19 of The Bachelor kicked off its 2015 season on January 5th – and Chris Soules made his Bachelor debut and met 30 bachelorettes hoping to win his heart in an extravagant three hour long premiere on ABC. At the live red carpet premiere party of Season 19, host Chris Harrison interviewed a slew of Bachelor and Bachelorette alums, obviously Andi Dorfman and Josh Murray were front and center. They would never miss a photo opportunity.

While being interviewed at The Bachelor premiere, Andi and her fiancée, Josh, both gushed about how much they love Chris Soules and how amazing he is – however, the interview got awkward when Chris Harrison brought up their wedding plans. It’s no secret that Andi and Josh have had a less than stellar engagement since the 2015 Bachelorette season finale. Despite Andi’s desperate attempts to convince her “fans” on social media that she and Josh are the picture-perfect couple, they have been plagued with break-up rumors for months. And the fact that they haven’t even set a wedding date is only further fueling those rumors.

Ironically, during the Bachelor 2015 premiere, Andi gushed to Chris Harrison that she and Josh hadn’t started planning their wedding yet because they just want to “enjoy each other for a while.” Anyone that follows Andi on social media knows that was a blatant lie – because over the summer she was posting pictures of her and Josh at Bridal Fashion Week in NYC and bragging to her followers that she was planning her wedding. So, apparently she started planning her wedding and then decided that they should just “enjoy each other for now,” and called off the plans? And Josh and Andi can’t understand why everyone thinks their wedding is cancelled…

One of the many rumored reasons that Andi Dorfman and Josh Murray haven’t picked a wedding date yet is Andi’s love for the spotlight and desperate attempt to score another reality TV deal. Since Andi dumped Chris Soules and he was named the next Bachelor, “Farmer Chris” has stolen the hearts of women across the country and gained a larger following than Andi ever had as The Bachelorette. Insiders claim that Andi is green with envy that Chris is resonating so well with Bachelor Nation and her time to shine is over.

Did you tune in to the 2015 Bachelor premiere? What did you think of Andi and Josh’s awkward interview with Chris Harrison about their wedding? Do you believe Andi is jealous of Chris’s rise to fame? Let us know what you think in the comments below and don’t forget to check CDL for all of your Bachelor spoilers and news.