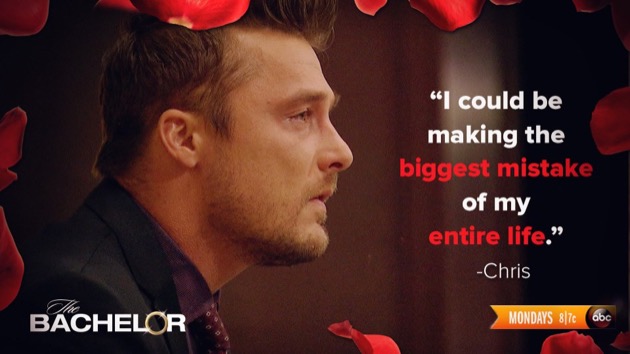 The Bachelor 2015 returns on ABC this evening with an all new Monday February 16, season 19 episode 8. On tonight’s show, Chris visits the hometowns and families of the final four ladies, where candid conversations take place and secrets are revealed.  If you cannot wait for tonight’s episode and want to find out what happens we have already spoiled the episode for you, right here!

On the last episode, Chris took the remaining six women to Iowa where one lucky lady accompanied Chris to his hometown to watch a high school football game. Later, some of the women took a spontaneous road trip to Chris’ hometown and saw how small it really was. Did you watch the last episode? If you missed it, we have a full and detailed recap for you right here.

On tonight’s show as per the ABC synopsis, “Chris visits the hometowns and families of the final four ladies, where candid conversations take place and secrets are revealed. At the rose ceremony, one heartbroken woman is sent home.”

Tonight’s episode of The Bachelor picks up where we left off last week, Chris SOules and the remaining six ladies are still in Iowa. It’s time for Becca Tilley’s 1-on-1 date in Iowa with The Bachelor. Chris Soules surprises her with a nice low-key date, and they spend the afternoon getting to know each other in his loft. Becca opens up to Chris and tells him about her first relationship, she confesses that she has never been in love with anyone before. But, she reassures him that she is beginning to have real feelings for him and she wants to introduce him to her family. Chris and Becca head up on the roof to watch the sunset together.

Meanwhile back at the hotel the other girls are gossiping about Britt. Whitney and Carly fill Jade in on Britt’s outburst – and how she freaked out when she didn’t get a group date rose, and it went to Kaitlyn instead. Britt joins them, and she says that packed her bags – she is planning on leaving before the rose ceremony. Britt starts sobbing and explains that her feelings were hurt because she told Chris she wanted to be his wife, and then ten seconds later he turned around and gave the rose to Kaitlyn. Carly begins bickering with Britt and accuses her of lying and says that she has no intention of leaving. Britt storms out in the hallway and cries, while Carly rants that Britt can’t handle not being the center of attention.

The girls start getting ready for the pre-rose ceremony cocktail party, Jade is nervous because she plans on telling Chris about her Playboy modeling, and nude videos. Britt gets dressed and is adamant that she is quitting the show before the rose ceremony. Chris Harrison walks in and completely ruins their plans and announces that tonight there will be no cocktail party, they are going straight to the rose ceremony.

Chris Soules arrives at the rose ceremony where Jade, Britt, Becca, Whitney, Kaitlyn, and Carlyn are waiting for him. Kaitlyn already received a rose on the group date so she has nothing to worry about. Just as Chris is about to start handing out the roses, Britt interrupts and begs him to come outside and talk to her. Chris agrees and they head outside, Britt apologizes for the way that she behaved at the date. Chris explains to Britt that that he knows how she lied about wanting to live in Arlington, and he doesn’t think she will make a good wife. Chris walks her out and says good-bye to Britt, once she is outside she sits on the ground and starts sobbing.

Chris heads back inside for the rose ceremony, he reveals to the remaining women that he just sent Britt home. He explains that it was because he didn’t think that he could trust her, and he isn’t here to play games. Now it’s time to hand out the roses. Kaitlyn, Whitney, Becca, and Jade all receive roses. So, Carly is officially eliminated from The Bachelor. She says her goodbyes to the other girls, and Chris walks her out, she sobs in the limo that she really wanted to introduce Chris to her family.

Now, it’s time for the hometown dates. Chris Soules travels to Louisiana first to meet Becca Tilley – they meet up at a local park and Becca gives him a tour. She warns him as they approach a stream that there are alligators in Louisiana. They head out in a canoe, and Becca explains to him that this is the first time she has ever brought a guy home to her family. She reassures him that her family is going to love him.

Chris and Becca head to her family’s house and she introduces The Bachelor to her parents Chris and Nancy, and her brothers and sisters. They sit down for dinner and joke about how awkward it is because they have never seen Becca with a guy before. Chris Soules chats with Becca’s sister Katie in private and she reveals that her sister is “not an intimate person,” and she doesn’t display affection – especially in public. Chris is beginning to get a little concerned, because he is scared that Becca will never fully open up to him and be comfortable being intimate with him. Becca’s mom basically reinforces what Katie told him, and explains that every time Becca hugs or kisses him it is “special to her.”

After dinner Chris surprises Becca and says that he has a date planned for her – they head to the local state fair and surprises her with a private ferris wheel ride. The fair is closed and they are the only ones there, they ride the ferris wheel and kiss and Becca gushes about how perfect the date was.

Up next on Chris’s hometown tour is Chicago, Illinois to visit Whitney Bischoff and her family. She has a busy day planned for The Bachelor, she informs himh that they are going to “go make a baby.” Whitney takes Chris to the fertility clinic where she works, she loves her job and there is nothing more rewarding than completing a family. Whitney and Chris get their scrubs on and she takes him to the lab to show him how to fertilize embryos underneath the microscope. Whitney jokes that she needs to test Chris’s sperm while they are there, Chris laughs that he is “sure his soldiers are marching.”