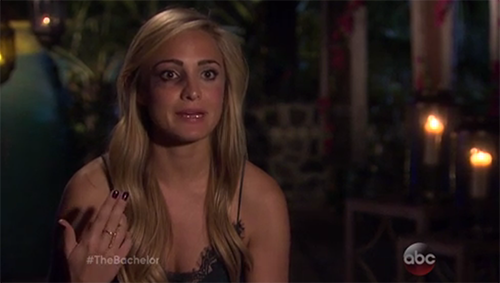 The Bachelor season 20 spoilers promise a season of romance, love, traveling to exotic places and a fight that ends in a black eye? The new promo says, “It’s raining Ben.” In addition, the ladies of the bachelor mansion are not complaining one bit. Ben Higgins is shown shirtless [and we are not complaining] as he kisses each one of the ladies while the other bachelorettes look on and fan themselves.

In the latest preview, three bachelorettes tell Ben Higgins, they are falling in love with him and the end up in tears after he does not return their affections. Ben Higgins grabs his face as if he is saying that the drama was getting out of control, even for a “The Bachelor” pro like Ben Higgins.

The most shocking part of the clip is when one contestant, Leah Block, implies the competition was so fierce for who received the final rose that she ended up with a black eye! Leah says, “I can’t believe it! She hit me.”

As if the contestants crying, fanning themselves at the mere sight of the Colorado-native hunk, and professing their love for him wasn’t dramatic enough – “The Bachelor” star, Ben Higgins, was seen wiping tears from his eyes? It looks as if this may be the most emotional season in ABC history!

Ben Higgins said he wanted this season to be different than any other season. Ben wanted to limit kissing and getting physical with the women and take the time to get to know them on a deep, personal level. “I want to make sure we spent our time getting to know each other one on one. That does not mean we will be kissing and making out the whole time,” Ben Higgins told Us Weekly.

It looks like fans can expect that Ben Higgins may not be the make-out king whom Chris Soules was last season; however, the bachelorettes are still crying over him the same. The software sales representative will break plenty of hearts – 27 to be exact – in his quest to find love on this season of “The Bachelor.”

Check out the newest preview and join CDL for the countdown to “The Bachelor” season premiere on January 4, 2016, at 8 p.m. Don’t forget to come back daily to read our latest “The Bachelor” spoilers, news and updates!