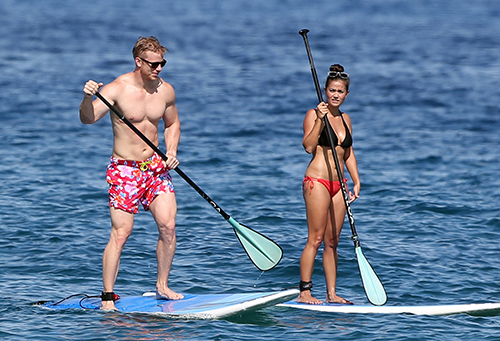 Generally when couples join ‘Marriage Boot Camp’ – it’s because they are “working” on their marriage fighting like cats and dogs, and on the verge of a divorce. So, you can understand Bachelor Nation’s confusion as to why Sean and Catherine moved into the ‘Marriage Boot Camp’ house. It is beginning to look like there may be trouble in paradise for the perfect couple. In an interview with People Magazine Sean and Catherine claim that they joined the show simply because they want to improve their communication – and implied that their marriage is just as solid as ever.

So, either Sean and Catherine are trying hard to reassure The Bachelor fans that their marriage is okay – when in actuality it is in dire need of help – or they are just desperate to remain in the limelight and on reality television. They are joining a show that generally caters to people with marriage woes, even though they have none. This isn’t Sean and Catherine’s first reality show since The Bachelor – they also signed on to “Celebrity Wife Swap” earlier this year.

What do you think Bachelor fans? Are Sean and Catherine on the verge of a divorce? Or did they just join ‘Marriage Boot Camp’ because they like to be on reality TV shows? Let us know what you think in the comments below!