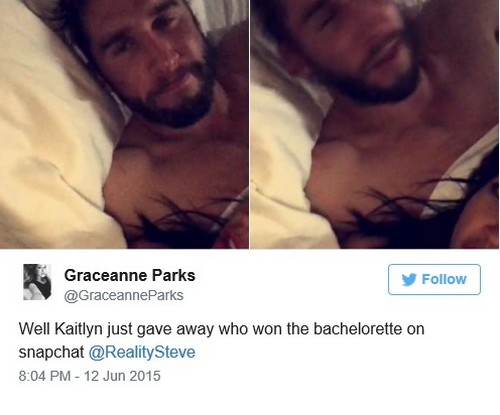 The Bachelorette 2015 spoilers who won tease that Kaitlyn Bristowe’s search for love will come to a shocking ending during the Season 11 finale – and fans will never guess who the 2015 winner is. Why? Well, according to Bachelor blogger and spoiler kind Reality Steve, there is no 2015 winner. Reality Steve’s The Bachelorette spoilers indicate that Shawn Booth and Andi Dorfman’s ex Nick Viall make it to the final two, however at the final rose ceremony Kaitlyn Bristowe announces that she changed her mind and doesn’t want to marry either one of them – she heads back to Canada without a fiancé, and a single woman.

Season 11 of The Bachelorette has been a wild and crazy ride, and it’s only half over. The Bachelorette 2015 spoilers tease that Season 11 doesn’t end with a traditional engagement and we’re not exactly surprised, so far Kaitlyn Bristowe has been anything but traditional and she doesn’t seem to be playing by any of the reality TV show’s rules. Also, before Kaitlyn Bristowe even began her journey as The Bachelorette sources were blabbing to media outlets that she was doing the show for fame and had no intention of getting married – it looks like they may not have been that far from the truth.

Despite the fact that it is very believable that Kaitlyn Bristowe doesn’t get engaged at the end of Season 11, rumors are already popping up hinting that Reality Steve’s spoilers are wrong and Kaitlyn Bristowe is actually engaged to Nick Viall. At this point in Season 11, we would normally say that anything is possible. However, Nick Viall was just spotted on a date with Chris Soules’s ex Whitney Bischoff in Chicago, so if he most likely is not engaged to Kaitlyn Bristowe. And, if he is – it’s safe to assume he won’t be for much longer now that photos of him and Whitney together have hit the internet.

If Reality Steve’s spoilers are wrong and Kaitlyn Bristowe is engaged – then it is to Shawn Booth. The Bachelorette slipped up over the weekend and posted a photo of herself in bed with Shawn Booth on SnapChat, which put Bachelor Nation in to a frenzy. Does this mean that Steve is wrong, and Kaitlyn and Shawn are engaged? Then again it could also mean that Kaitlyn was engaged to Nick Viall, and the video was payback for him hooking up with Whitney Bischoff.

What do you think of Season 11 of The Bachelorette so far? Do you believe Reality Steve’s spoilers – that there is no winner or engagement at the end of the show? Why do you think Kaitlyn changed her mind, or did she never have any intention of really getting married? Does the video of Kaitlyn and Shawn in bed mean that he is the 2015 winner? Let us know what you think in the comments below!